Some characters in the book "Daniel X Lights Out" are Daniel X, Mikaela, Zeboul, Xanthos, Mel, Dana, Willy, Emma, Joe, Dad, Mom, Pork Chop(Brenna), Agent Judge, and Nurse O'Hara. All of this takes place on a highway, in a hospital, on a bullet train, and in Kansas. Most of the characters Daniel already knows but Mikaela he met on a train but didn't know that she was his Dad's backup spiritual adviser. Nurse O'Hara he met in the hospital along with three other doctors he didn't know the names of then. 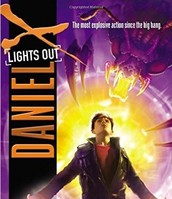 Is He an Alien?

The main characters conflict is external and internal. Its external by him being nailed by a macktruck and getting put in a fake hospital. Its internal by him feeling emotions that he never felt before like how he felt powerless and couldn't stop the macktruck from hitting him. He tried many many times to conjure up a wall but he just couldn't. Daniel compared to the other characters makes him seem a bit powerful since he has to stop the world from being invaded by extra-terrestrial beings. But, compared to Zeboul he is almost powerless. The audience can connect to the main character by having their opinion affect the whole world.

The main conflict in the story is that he has to find a way to stop Zeboul from destroying the world and kill all the evil. The giant praying mantis was just a form he took. His real form cant be seen. When he was little and his parents died when the thing came down the stairs it glowed in a violet light. The violet light was the color of evil just like how yellow and gold are the colors of good. Evil and good cancel each other out in battle when against each other. When Daniel died and went with his parents and friends he decided to bathe in the golden light and rebirth himself a new being. When he was doing this Zeboul was screaming "NO!" at the top of his lungs. Towards the end he has to use all his magnified powers to end the black hole that was engulfing the Earth and all the solar system.

A God can Die?

The theme in my book is when the Earth depends on you, you depend on the Earth to support you. This is relevant when Daniel has to fight Zeboul in his mantis form. While he was fighting him all his friends were hoping he would come out alive to live another day. When his friends offered to help him he simply said it was his match not theirs and he didn't want to hurt them ever again. So he just sent them away to someplace far far away from his fight. Daniel was able to defeat the giant mantis but never realized that it was just a form he had taken on Earth not his real self. But Daniel killed the mantis form but just let the real deal out. Finally he was able to kill darkness by death which is something he never wanted him to do so that he doesn't come back stronger than before. He was able to kill him even though he was immortal and can never die.

Did He Win or Lose?

I recommend this book because its action packed and has some weird but funny scenes. Other people should read it because its one guy fighting all the evil that are inhabiting Earth with his four friends who later come back real instead of him imagining them up. It was very good but i accidentally read the fifth book first instead of one and two. So hopefully by me buying the rest of the series i will donate them to the library and hope that the next person to read this series reads them in order. Although i read them out of order it was still good and i understood everything the characters said. The only thing I couldn't understand was when they started to speak a different language. Other than that it was a good book in all everybody should read it since its pure imagination fighting the evil in the world.