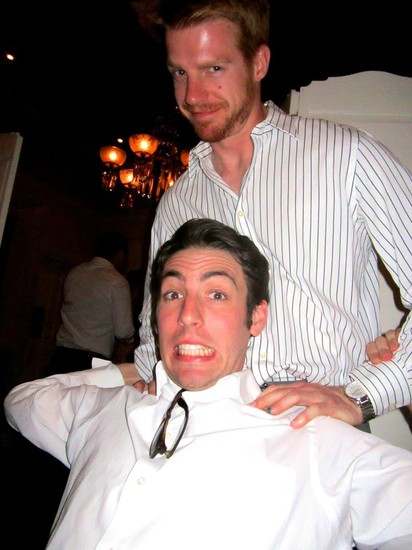 ONE OF THESE PEOPLE IS HAVING THE WORST WEEK EVER

Just kidding, it's both.
Not only was Greg fucked by the long dick of the law losing (pending stat correxxxx) by a mere two points. AND FOR THE LAST FUCKING TIME YOU DON'T GET POINTS FOR FUMBLE RECOVERY YARDS, ONLY TOUCHDOWNS. On the bright side Julio is done for the year after dropping the TD catch that would have won Greg the matchup. Even worse Red had to wait out the 'second opinion' that came Wednesday and missed out on picking up Harry Douglas. Technically Greg won't feel the pain of chocolate rain until next week with the Falcons licking their wounds this weekend.

k47b0i slid down the hershey highway of standings, landing in relegation position. Will he stay there or will Josh Freeman, Carson Palmer and Terelle Pryor pull him out of the depths? For once I feel like that sentence is funny enough without referencing erections or semen.
On the bright side Matt totally didn't act like a petulant 16yo girl after watching me steal Foles from him off of waivers. Come get him Matty. www.huffingtonpost.com
A Florida woman is accused of stabbing her boyfriend in the eye because he refused a horizontal dance with her. The victim told police that La Crystal King-Woolfork, 28, of Vero Beach, came home drunk on Sept. 26 wanting sex, according to TC Palm.

sports.yahoo.com
From Yahoo Sports: In a strange reaction to a colorful incident at an Ohio middle school, a 15-year-old student has been punished for using a phrase popularized by the Fox Sports announcer Gus Johnson in the Madden football video game series while announcing … Continue reading →

THESE STORIES CHANGED MY LIFE

The first one had so many twists and turns it seemed like M. Night Shamalamadingdong movie, only interesting. I think we can sum it up as TFS...That Florida Shit. I was expecting it to end with a cross-country diaper voyage.

The second one - Won't someone please think of the children?! Please notice the name of the reporting paper. Published in your shower.

FACES IN THE CROWD

WILD CARD: Austin Pettis with 16p...meh. We didn't miss too much.

ANTI-NIRVANA: Red made a savvy pickup of Keenan Allen only to sit his 17 points. That would have crushed Cruz' 4 (lol@u). Chucky sat Wilson who outscored both his QBs. Bradford over Wilson?! Cats and dogs living together?!!? These wouldn't have even made the list last week, good job boys. Relegation sighting - Mrs. Commish sat Pierre Thomas' throbbing boner ftl.

DIRK DIGGLER: A newcomer this week as Tony Romo went ultra no-homo and splurged 45 points in an impressive but ultimately tragic effort. OF COURSE dipshit Greg complained about his game-sealing last minute pick preventing more points. It's called being an ingrate Red, and the fantasy gods noticed (praise be Yahweh).

PARITY: I've said it before and I'll say it again. The 9th place team just beat the 1st place team to the tune of 39 points. Everyone has a win and still has a shot at the title. Except Matt. He sucks. Matty I TOLD YOU your fantasy hubris was crushing. Fucking Icarus. Good job picking up Josh Freeman.

I'd like to take this space to congratulate Joey Durso for starting the two highest scoring RBs of the week, having sat both of these players in other leagues I am extremely jealous. Difference is I won my other leagues and Joey lost this one. Sucks to your assmar. 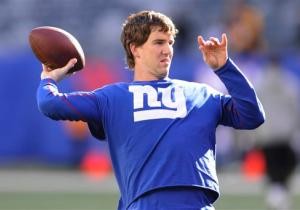 TDS shaves red 158-156: Bad news for Commish fave and parity lovers alike. I can't help but feel bad for Greg, but not bad enough to stop trying to trade-rape him. Charlie gets back into familiar territory and who does he have to thank: his TE kicker and defense. And Julio's endzone stonehands (too soon?). For Greg the 2-tight set went...poorly, and with Keenan Allen sitting on the bench. Youch. Greg was failed by the Patriots and Cruz (lol@u). Shockingly a Jets RB was subpar for Chucky. Don't think I don't see you there Bilal. Praise be Tony no Homo in a losing effort (TWO MEANINGS!!). God damnit Gronk

Sub-human dominates KKK 171-132: Big moving day for both teams as Dan climbs juuuust out of relegation position and Joey drops from the top spot all the way to...2. Joey got bit by the bye week caper and an inappropriately large ugh boner. Something about getting your wife pregnant that really makes the fantasy boner swell. Joe Finegan would be awesome at this. On the bright side Joey you actually beat projections even though 4 of your players met theirs. The revolving door of Manning favortism hut Demaryius IN THE FAAAACE this week. Dwayne Bowe only made half his projection...which was six. Sweet pick Dan. Many sacrifices must be made in honor of FJax, Thomas, Moreno and Cleveland D. Dan's other WRs also got pretty swollen behind the zipper.

Rapers gone rape 159-132: The Jiz Manning's extended their raping spree and it was a tender catass that felt it's power this week. Hicks and Jacquizz get a thumbs up their giant black penises but Manning's is the only erection rowing the Jiz boat. Matt got good days from Rice and a huge day from Bryant but it was far too little to squeeze. Colston and Bernard have to be pretty disappointing, almost like the Commish has hated Colston since forever but I digress. We are all waiting our turn for feeling a throbbing Manning phallus pressing against our colons, this was just Matt's turn. Sooooo close on the bold predix.

JC smotes Ditka 137-117: For a second straight week Dr. Commish scored a decisive victory over Jewspawn Shenkin. The tike actually thought he had a chance Monday night. Poor thing, he had so much heart. Sorry Tobey Maguire, this is daddy's league, you're always gonna be a little guy. Schaub was kind of a disappointment but my WR bukkaked everywhere to make up for it. Pete's top scorer was KC Dst, sure tied with Breezy but still that's a real shame. Everyone else was pretty disappointing. I can't believe I broke my own rule and played a WR (and a Jet??11/1?!) instead of a RB. Shame unto my name. Beat is Shenkin. Danny Woodhead can eat my dick #boldpredixx

Lacey straps one on, fucks Bush 158-139: Welcome to the win club Lace, enjoy that medal. Shemanager dominates the waiver this week with Fitz and Jeffery both slinging yogurt into Jon's ear. TY Hilton tried to forsake JC and carry Bush to victory but was redeemed by Ryan Mathews aching head. Lacey's team was feast or famine with those that beat projections absolutely murdering them, with Miller and Rice rolling over and taking a load. Praise be SF Dst (finally), definitely worth the draft pick. Jimmy Graham only 13p??1?1!/1!/1.2.2.@?? How dare he. Clay taking up points on Jon's bench, trade bait? I overvalued Amendola...whoops. 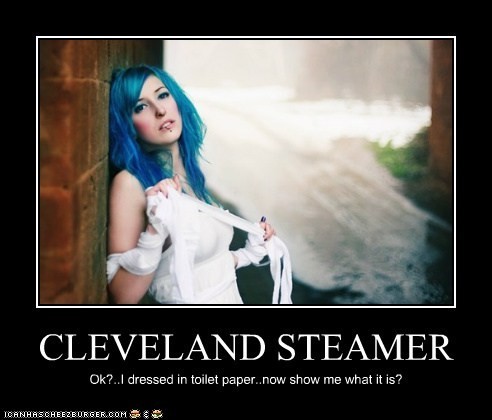 * - JC were formerly known as the Cleveland Steamers. No other meaning is implied**

The best favor is a favor returned KKK has final solution for Down Syndrome 144-129: All good things must end, and I think it's Chuck's time to feel the sting of defeat. Thursday for the second straight week has a chance to decide Joey's battle. Chicago's D vs Forte and Marshall, should be a slugfest. With Andre hurting Joey may need to find a WR, with all his RBS that shouldn't be so hard. Julius Thomas and Welker may combine for 30 or 6, you never know with Manning, but Manning will likely be on the bench by the 4th quarter. No real favorable matchups on offense, maybe McCoy? Forte? Who knows. Bold prediction: Chicago D highest score in matchup. Strangely enough even if he loses Joey will likely stay in 2nd.

Commish fave back on track, bursts Jiz 151-147: Manning's matchup is maybe too good (see above), and that is a big problem for little Oren. MJD at Denver is going to be a huge problem, but Hillman may get mopup duty starting in the 2nd quarter. Murray should explode too. Spiller and Morris get back on track for the burst and Gronkerdoodle FINALLY returns and gets targeted eleventy billion targets. Victor Cruz is projected for 12 points, he will not get within 5 points of that, one way or another. Romo and Cutler should have good days, rivaling Oren's big dong QB stable. Bold prediction: Oren ends up down 6 on Monday, gets 2 from Royal.

JC bestows beatdown on ravaged Bush 138-112: Bye weeks and injuries are not kind to the former bridesmaid. Starting RBs look to be Peterson, Pierce and Michael Bush, that's not fantastic. We will both be benefiting from a Monday shootout. Dalton may just forsake me and shed his pussified gameplan...throwing TDs to AJ Green :D. Denver's Dst may spew munz all over me but it won't be enough. I have large hopes for Gore this week, up early and mopping up. Bold prediction: I trade for someone who has a huge week, then gets hurt for the season, ravaging my team.

Kansas City to the rescue 138-131: Alex Smith penis sighting - multiple dubble dipz from KC carry Ugh to a win. Why do I think that? No real reason, but Oakland sucks a lot and Pete lives there, making things worse. They tie at TE with 0 points, while Graham scores 12 in Pete's flex. Manning comeback mode munz? If by munz you mean pix then yes. I reeeaaalllyyyyy want a slapbet on this. Danny Woodhead as an every down back? Good luck with demz. Bold prediction: Pete inexplicably sticks with Jenning's 3 points.

Basement battle, Lacey teases Cat with 125-121 dub: Matt has a vast hole at the top of his lineup. RGIII gets an insanely good matchup and drops his first load of the season all over some cat ass. Chris Johnson does not get back on track and Ray Rice gets forgotten for the 18375th time in a passfest against the pack. Bryant will be good I guess. Bold prediction: Vinatieri kicks zero field goals and can't bring k4t to victory on Monday night.

Follow Mike Saksen
Contact Mike Saksen
Embed code is for website/blog and not email. To embed your newsletter in a Mass Notification System, click HERE to see how or reach out to support@smore.com
close