My Favorite Vacation is Disney World

My Favorite Vacation is Disney World 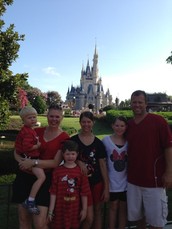 It was the night before leaving to go to Disney world and I was anxious to be going to "The Place Where Dreams Come True" , or at least that's what I was told . Though I needed as much sleep as possible because we were going to wake-up at 4:00 a.m. and drive for 2 whole days in the car , I was too excited to lay my head on a silly pillow! When I set my mind on something exciting , there is no way to fall asleep! It was 4:00 a.m. I thought as I jumped out of bed and ran to the car . After coaxing my siblings out of bed , we started driving . As time in the car went on it got a little boring , ok a lot boring !!! After 2 days of boredom , at 4:30 in the afternoon we arrived at a sweet condo that we would stay in for a week while we were in Disney World . We would be going to Disney World the next day so we needed to be ready .As I crashed into bed, I dreamed about Disney World and how amazing would it really be ?!! After a good night's rest , I was up and ready for a day of fun! My family and I were heading for Magic Kingdom, known for it's Cinderella's Castle. My sister, Dad, and I went for the more extreme roller-coasters , like Space Mountain , while my brothers rode the Tiger and Pooh ride. We could have had fun all day, if my brothers had not felt exhausted after lunch. I was very disappointed with them, until I found out we were going back at night to see the Magic Kingdom firework show. It was amazing! Tinker Bell made an appearance by dodging fireworks in the sky. We had a very eventful night!

The next day I went to Epcot and rode ride Test Track, where you design a care while your waiting in line, then it appears and you text your car in all sorts of conditions. It was awesome! I really think we just spent the day at that one ride! Honest! I think Epcot is the best Disney Park ever!

It was near the end of our trip with only 2 days left and we decided to go to a Disney water park! Typhoon Lagoon was based off a beach theme all over the park and it fit more for summer time so we went there. At that time Teen Beach Movie had not aired yet and I got to meet the actors in the movie especially Tanner. That day it was really windy and the camera men and hair stylist were freaking out because Tanner's hair kept getting messed up while he was playing with other kids, and my siblings and I. It was a really funny scene!

I enjoyed my first time being in Disney World! I recommend it to every family to go at least once. Believe me, it's worth it. I loved it! I hope I can go back there again!

The meeting of Buzz Lightyear

One part of Magic Kingdom was based on the future and that's where we met Buzz Lightyear!!!

Another part of Magic Kingdom was based off the movie Dumbo and a store in there was where we had some fun being Minnie Mouse ! 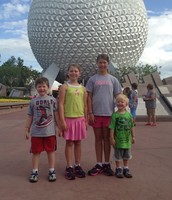 As soon as we entered the Epcot, the disney park, we were stunned by the big ball and immediately decided something . To take a picture right there!!!