vote for him as PRESIDENT!

vote for him as PRESIDENT! 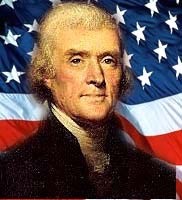 His full name was Thomas Jefferson. He was born on April 13,1743, in Shadwell, Virginia. His education came from the College of William and Mary. Jefferson's learning lead him up to getting the jobs of U.S. Vice President, U.S. Governor, Government Official, Diplomat, and his biggest successful achievement; U.S. President. But unfortunately to an end just like ours will on July 4,1826, in Monticello, Virginia. That's Thomas Jefferson's life bio.

Jefferson believed in the France flag or France because of the French Revolution and he had duties from France that gave him powers.

He was a farmer himself and back at that age farmers fed all the people. So Jefferson believed in the farmers in his town.

Jefferson was a Republican, he felt that the government belonged to all the people. They believed most people could make good decisions about their country. They wanted strong state and local governments. Thomas Jefferson and James Madison were Republicans.