Cait is using Smore newsletters to spread the word online.

Get email updates from Cait:

Daisy Bates, born Daisy Lee Gatson, was an African-American civil rights activist who took particular notice in the affairs happening in her own town of Little Rock, Arkansas. She is most-associated with the Little Rock Nine, a struggle to integrate a previously all white Central High School. Her role as an adviser to the nine black students attempting to attend this school began in the fall of 1957, after assuming the position of leader of the Arkansas state branch of the NAACP. She bravely rebelled against harassing mobs to achieve one of the first successfully integrated schools in America. 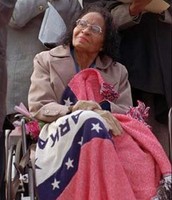 Bates as an adviser to the Little Rock Nine

has other information about Bates, but has a very good article detailing her involvement with the Little Rock Nine

Adopting Thoreau's ideal, "Let every man make known what kind of government would command his respect, and that will be one step toward obtaining it," Bates stepped up and spoke out against the way her race was being treated by the government. She used her powers of journalism to call into question the government's integrity when it made no actions to support the Brown vs. Board of Education court ruling that declared the segregation of public schools unconstitutional. As leader of the Arkansas state branch of the NAACP, Bates operated on the front lines of the campaign, acting as adviser and protector of the nine black students, the "Little Rock Nine," that attempted to attend the so-called "desegregated" school, meeting angry mobs and racial bias head-on. Her words sparked a fire that moved the people of the African-American community to action and protests led to changes in the government's treatment of the black population and successful integration of Central High School in Little Rock Arkansas, gaining momentum that continued to push the African-American civil rights movement forward.

Cait is using Smore newsletters to spread the word online.