Foundations for Life Long Learning 23 May 2019

Foundations for Life Long Learning 23 May 2019 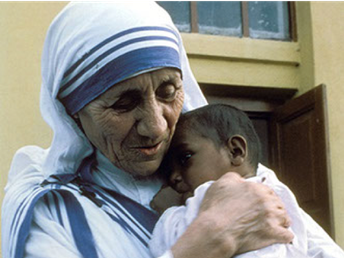 The fruit of SILENCE is Prayer

The fruit of PRAYER is Faith

The fruit of FAITH is Love

The fruit of LOVE is Service

The fruit of SERVICE is Peace

As I noted in last week’s Newsletter, NAPLAN has been prominent in our educational focus recently, albeit not necessarily for the best of reasons. The issues that we experienced with the Year 5 online Writing Assessments have taken most of the week to resolve as we have been waiting for direction as to how we are able to proceed. We have now been granted permission to re-sit Assessments where children experienced difficulty due to the problems with connectivity. In addition to the Year 5 Writing Assessments, during which almost all children experienced disruption, there was also some disruption that affected a few children in the Year 5 Language Conventions Assessment. The parents of the affected children have been contacted and asked to advise us whether they would like their child to re-sit the Assessments on 28 and 29 May. There were no disruptions that would have disadvantaged the Year 3 children so they will not have the opportunity to re-sit Assessments. We can only hope that all of the problems that have occurred, do not significantly compromise the overall validity of the Assessments.

The planning for next year’s campout is already underway with the first decision made being that the event will definitely be held in the first Term next year. The cold weather, however, didn’t deter the campers and an excellent night was enjoyed by all. Thank you to our event organizers Jerome Wilson, Liam South, Adam Ciccarone and Stuart Doncon who ensured that everything was well prepared and the everyone had plenty to eat.

Next Friday, 31 May, will be a pupil free day as the staff will be engaged in Professional Development sessions. Hopefully this will allow families to enjoy a long, long weekend as Monday 3 June is also a day off for all children and staff as we celebrate Western Australia Day.

The online ordering for the Canteen has been operating for the past couple of weeks and the feedback that I’ve received has all been positive. You can order for a particular day or for the whole week if you’d prefer. Go to myschoolconnect.com.au to register by following the prompts.

It’s only a few weeks until one of the children’s most favourite days of the year when they get to wear their PJs to school in support of the homeless in our community. Whilst I, too, enjoy the day, the night, when I get to sleep in a cardboard box, isn’t quite as pleasant. I think it is a much better way for us to raise money than the idea suggested by some of the Year 6s which was to charge children to tape me to one of the outside pillars and then see how much tape it took to hold me off the ground…give me a cardboard box to sleep in any night! 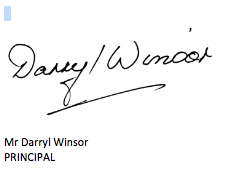 No school for students

At the end of this Term, your child will be receiving their Semester One reports. A letter outlining how to access the reports was emailed to all parents early in the Term.

It is important that your check your log in for SEQTA Engage as early as possible so that you will be able to access your child’s report.

If you experience any difficulties please contact the school immediately.

What a busy and exciting start to Term Two it has been in the Year 5 classrooms. We are currently finishing the second week of NAPLAN assessments where we have been putting to good use our prior knowledge in the areas of Writing, Reading, Language Conventions and Numeracy.

Next week, we are looking forward to our excursion to Constable Care in Maylands where we will undergo some further understanding around Road Safety with links to both Health and Technology.

This term, Year 5 have looked at Binary number and the impact this has on Technology. Firstly, we studied numbers to 20 and then created a Binary Birthday poster displaying our Birthdate in Binary form!

As Term One was completed, we also had the completion of our Art project. We created Birds in a project that spanned many weeks of colour study, creation of painted feathers and using our fine motor skills. Some finished products are shown below!

We have continued to build on our grammar skills and what constitutes descriptive language. This has linked well with our Writing program that has focused on Narrative and Persuasive Writing genres. 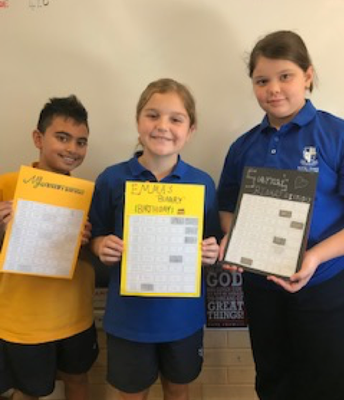 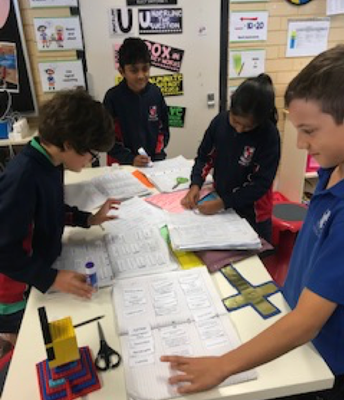 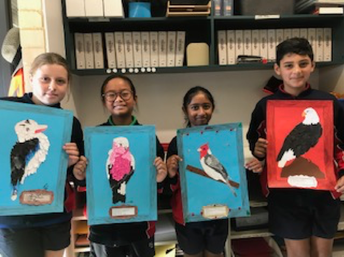 Friday 31 May: CLOSED; NO SUSHI THIS WEEK

Hope to see you at the canteen soon.

The Uniform Shop will be open on

Orders and payment can also be made at the front office.

Please note that if you purchase or swap a uniform item off the second hand rack, please change the name of the previous owner. We have quite a lot of stock at present, so if there is anything you need in particular please come in and have a look. 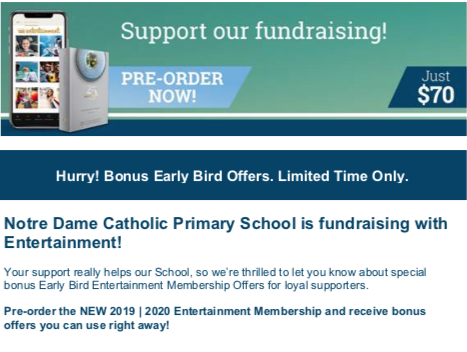 aus01.safelinks.protection.outlook.com
Social media and technology comes hand in hand with teens these days. But as a parent, this can lead to concern about what our kids are doing and seeing...

Social media and technology comes hand in hand with teens these days.

But as a parent, this can lead to concern about what our kids are doing and seeing on social media.

Hey Sigmund - Karen Young talks about the impact that social media can have on your children and how to help them, and yourself. 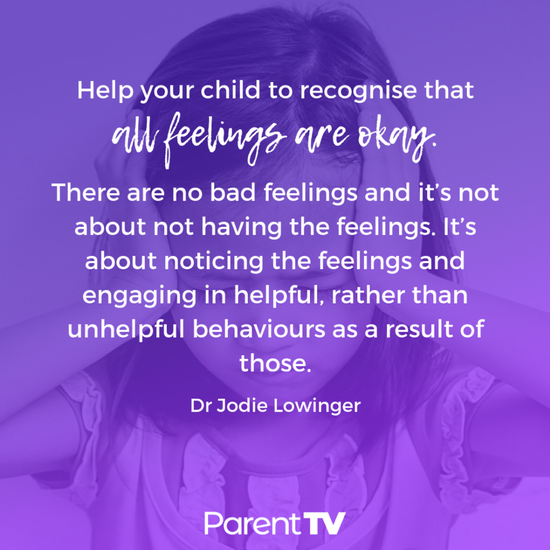 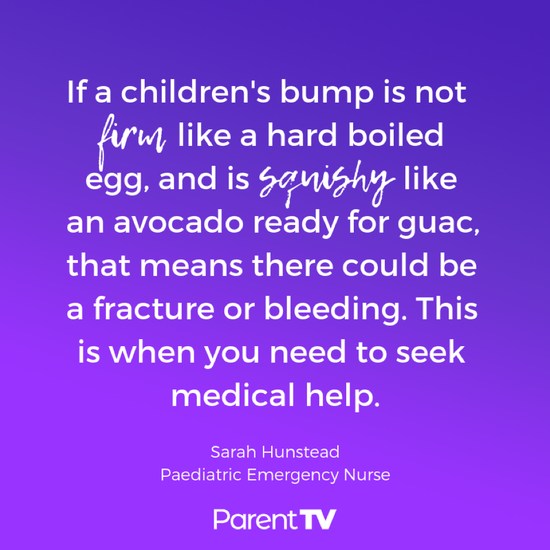 aus01.safelinks.protection.outlook.com
School refusal is a common problem however if it becomes ongoing, parents need to look for signs of something deeper at the cause.

As adults, we all know what it is like to not want to go somewhere we have to go or do something we have to do. It might be work, a social gathering or even simply doing the grocery shopping, that has us dragging our heels and wishing we didn’t have to.

For a child, it is no different, except that their version of work is school or maybe some other type of care, such as childcare. Just like adults, kids have their off days where they just want to be doing something else.

Find out how to talk with your child to see if there is a deeper issue:

aus01.safelinks.protection.outlook.com
School refusal is a common problem however if it becomes ongoing, parents need to look for signs of something deeper at the cause.
"How to cope with back chatting and rudeness." by Maggie Dent.

One of the most common problems parents face is back chatting or rudeness from their child. Maggie Dent, Parenting Educator, Author and Speaker discusses why this happens and what parents can do to stop this negative behaviour.

aus01.safelinks.protection.outlook.com
We hope you have a wonderful week!

Sam, Britta and the ParentTV Team. 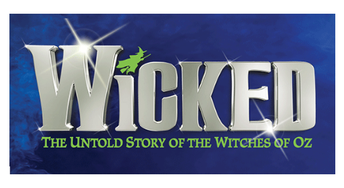 Mercedes College is proud to present its 2019 Production of Wicked. Featuring a cast of over 70, this musical is coming to the Regal Theatre in Subiaco for 4 performances only, from Friday 2 August. Tickets are available at http://www.ticketek.com.au. If you would like to know about Mercedes College, follow us on Facebook. 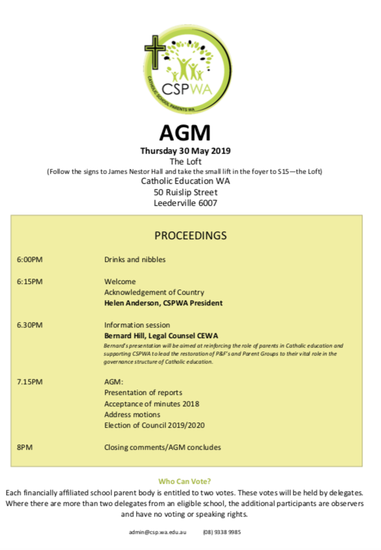 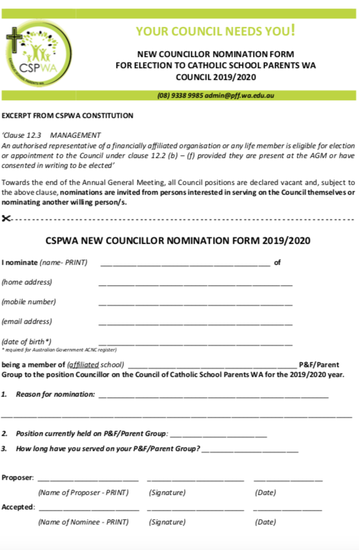 If you wish to get a copy of the Carter for CSTWA Council, please see the front office.

THE CHILD AND ADOLESCENT COMMUNITY HEALTH

If further information is required, please visit our website 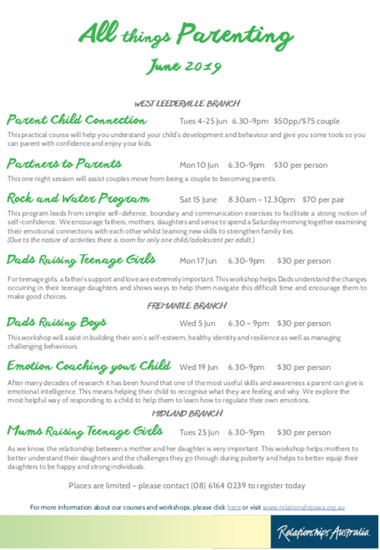 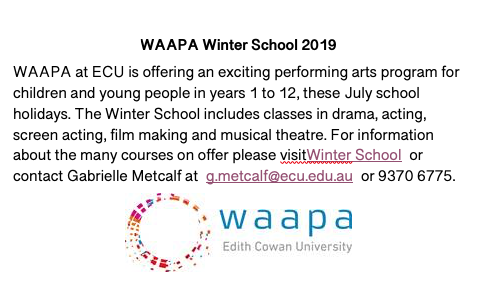