Summer! It's a time for faculty and students to re-energize and relax a bit. Even if we are taking or teaching a class, we typically get a little more down-time in the summer. These breaks are vitally important for everyone. As Madisen Taylor writes "after a full day out in the world, stories, words, images, and songs from any number of sources continue to play in our heads hours after we encounter them. Even as we lie in bed, in the quiet dark, our minds continue noisily processing all the input from our day. This can leave us feeling unsettled and harassed. It also makes it difficult to take in any new information or inspiration. Like a cluttered house that needs to be cleared if it is to have room for movement and new life, our minds need clearing if they are to be open to new information, ideas, and inspiration."

Our jobs as faculty require continual learning and inspiration. Therefore, our breaks are essential to well being, progress, and growth. I hope everyone gets a little time to relax, enjoy the hot Arkansas summer weather, spend some time reading for fun, lounge in a favorite spot, and refresh your mind!

UCA faculty, staff, and community members observed and judged the competition where the team from Ida Burns Elementary school coded their way to victory. Each school was well represented and scored high points on each challenge. The challenges were developed by Dr. Jason Trumble in collaboration with the gifted and talented teachers from the Conway School District elementary schools.

One student was walking to the bus when he remarked, "I can't believe we got the robot to work!" Not only did all of the robots work, the competitors surprised the judges with their ingenuity and creativity. These students excelled in their engineering of the robots, coding their robots' actions, and adjusting to a myriad of variables. We are very proud of all the competitors from our partner schools and we look forward to collaborating and hosting this event again next year.

The Conway Elementary Robotics Competition is another fantastic example of the UCA College of Education collaborating with K-12 schools to support Arkansas children. 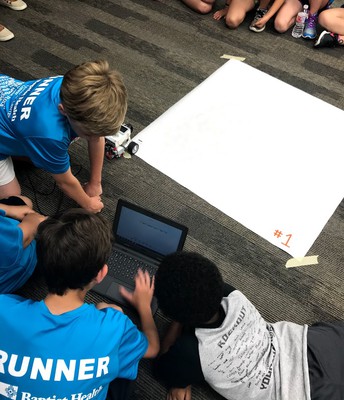 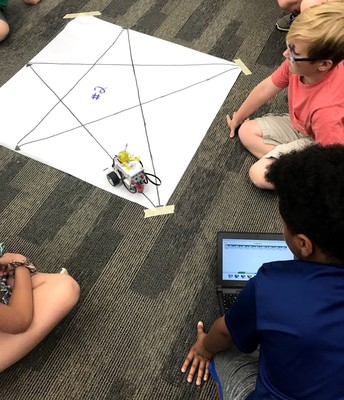 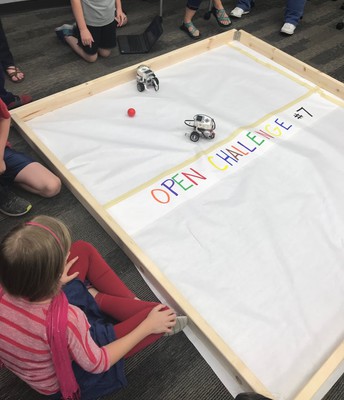 Marian Jimerson, English Teacher at McLelllan High School in Little Rock, AR was the keynote speaker. Over 140 students were presented with their pins. 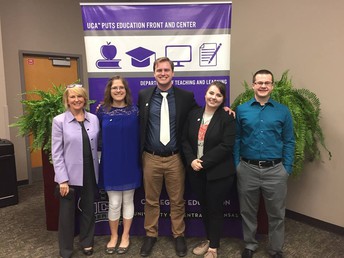 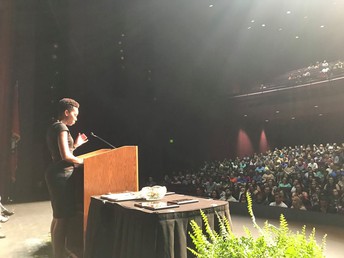 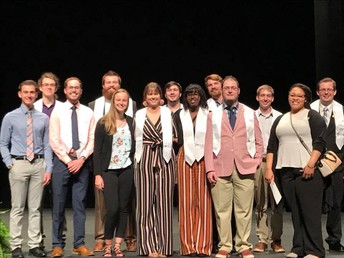 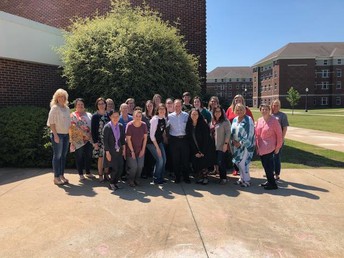 Congratulations to the Spring 2018 LIBM graduates! This was one of the largest LIBM graduating classes and they presented excellent exit portfolios.

The Department of Leadership Studies took over the program in 2007 with less than 20 students; today they have approximately 140 students with most living more than 75 miles from campus.

You can view TheBestSchools.org article by going to: https://thebestschools.org/rankings/best-online-masters-school-counseling/ 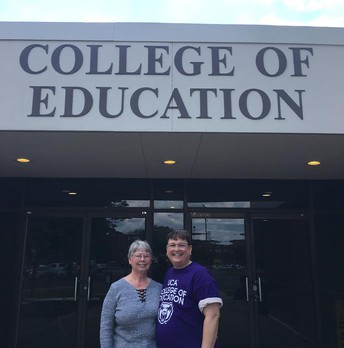 Dr. Wendy Rickman (UCA, MS 1996) grew up helping out in an elementary school library. Her mother, Mrs. Ruth Anne Rickman (UCA, MSE 1989), was a K-12 librarian for Brookland schools (Brookland and Dixie campuses) starting in 1975. Wendy recalls her mother did everything...she was a class sponsor, supervised library aides, presided over study hall, and managed the two school libraries she worked at.

Ruth Anne initially received her BSE in Business Education with a minor in Library Science from Arkansas State University. In the mid 1980's Arkansas passed legislation requiring school librarians to be a licensened teacher with a Master's degree. Although Ruth Anne met the requirements for the grandfather clause, she and several of the school librarians in Northeast Arkansas decided to go ahead and get the degree.

Wendy recalled that UCA's library media program was then referred to as an Educational Media/Library Science (EMLS) degree and the program was face-to-face. Her mom spent many summers on the UCA campus taking classes and she would occasionally get to come to campus with her. Wendy stated, "Our kitchen table was her desk most of the time. Typewriter, books, papers, card catalog cards...and somewhere are pictures of me "role playing" as a student demonstrating how you interact with students for checkout." Wendy grew up in the school library re-shelving books from elementary on. She was checking out books to high school students in third grade during study hall and after school. Wendy stated, "The last day of school, I would go with my mom through the lockers to hunt down library books, or go to the classrooms and take a quick look."

Wendy cultivated her love of teaching and the library by becoming a third generation Arkansas State University education student graduating with a BSE in Social Studies in 1994. Wendy was given the opportunity to fill one of three spots for a fellowship at UCA for EMLS students. In acceptance of the fellowship, the recipients agreed to get their degrees in a year and teach as school librarians in Arkansas for two years.

Wendy and her mom talked a lot of shop. She recalled that in the summer of 1996 her mom took a class with her. They even partnered with each other for an assignment. Wendy graduated in August 1996 with licensure in 7-12 Library Media. She was hired by the Randolph County School District (Oak Ridge Central) as the K-12 school librarian. She took an additional 9 elementary hours to get her K-6 library media licensure.

Wendy learned a lot from the years she was her mom's unofficial library aide. Wendy stated, "It's funny to be on campus at UCA and see it through the different lenses I have experienced...as a kid hanging out with my mom, a grad student, and as an employee." Ruth Anne enjoys visiting her daughter on campus. She has good memories of UCA and Conway.

Ruth Anne retired from Brookland with 32 years at the district.

Mrs. Amy Thompson, ELSE Graduate Reading Program Coordinator & Assistant Professor, was recently appointed to the Arkansas Reading Association (ARA) soon to be Arkansas Literacy Association (ALA) Board. Amy will serve as the Historian.

The ALA is a professional organization of individuals, institutions, and councils dedicated to promoting reading and developing literacy.

Congratulations Dr. Stefanie Sorbet! Dr. Sorbet is a new faculty member in the Department of Elementary, Literacy, and Special Education (ELSE). She recently successfully defended her dissertation and received her doctorate. Dr. Sorbet will join ELSE in the Fall as an Assistant Professor. 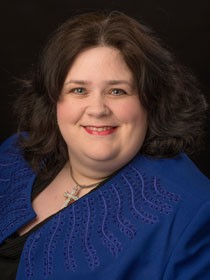 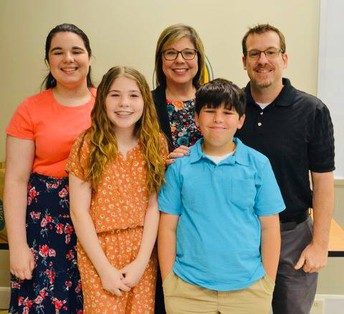 The most significant part of the project was the creation of an iBook available to teachers for free. The digital book offers strategies for classroom teacher to support children who are experiencing grief. You can download Laurie's book with iBooks on your Mac or iOS device at: https://itunes.apple.com/us/book/id1378646321.

Ms. Madison Breazeale recently presented her honor thesis project on in partial fulfillment for the Nobert Schedler Honor’s College. Her thesis is entitled "Bridging the Gap: Jesus, the Teacher, and Modern Learning Theories," and her advisor was Dr. Mara Cawein.

Ms. Morgan Bullard, Graduate Assistant for the Department of Elementary, Literacy, and Special Education, was recently recognized as a Bear CLAWS recipient. 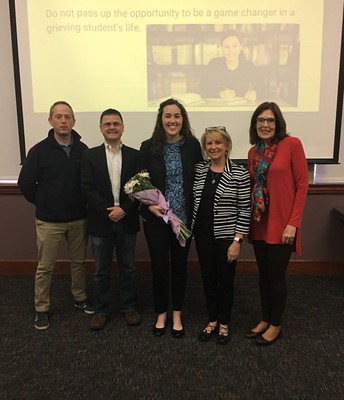 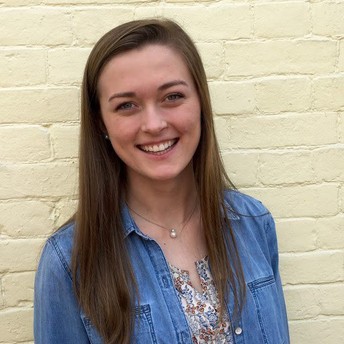 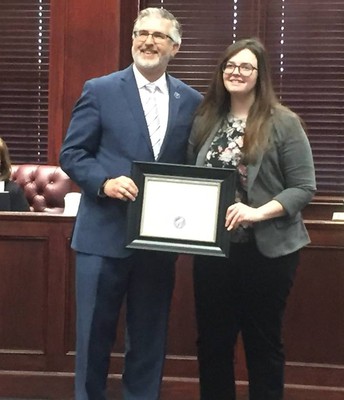