Kimmi is using Smore newsletters to spread the word online.

Get email updates from Kimmi: 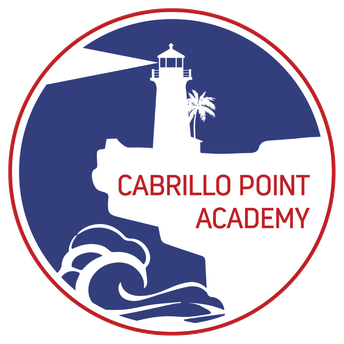 We would like to thank all of the students who participated in the 2021 Cabrillo Point Academy Elementary Science Fair! Our participants ranged in grades from TK to 5th and were challenged with using the scientific method as outlined in the following steps:

2. Make a hypothesis (guess the answer).

3. Experiment and test your hypothesis.

4. Examine and analyze your results.

5. Communicate your experiment and results.

All of our participants did an excellent job and provided us with some truly remarkable projects! View their amazing projects below!

Dissolve Skittles - What happens to Skittles in different liquids? 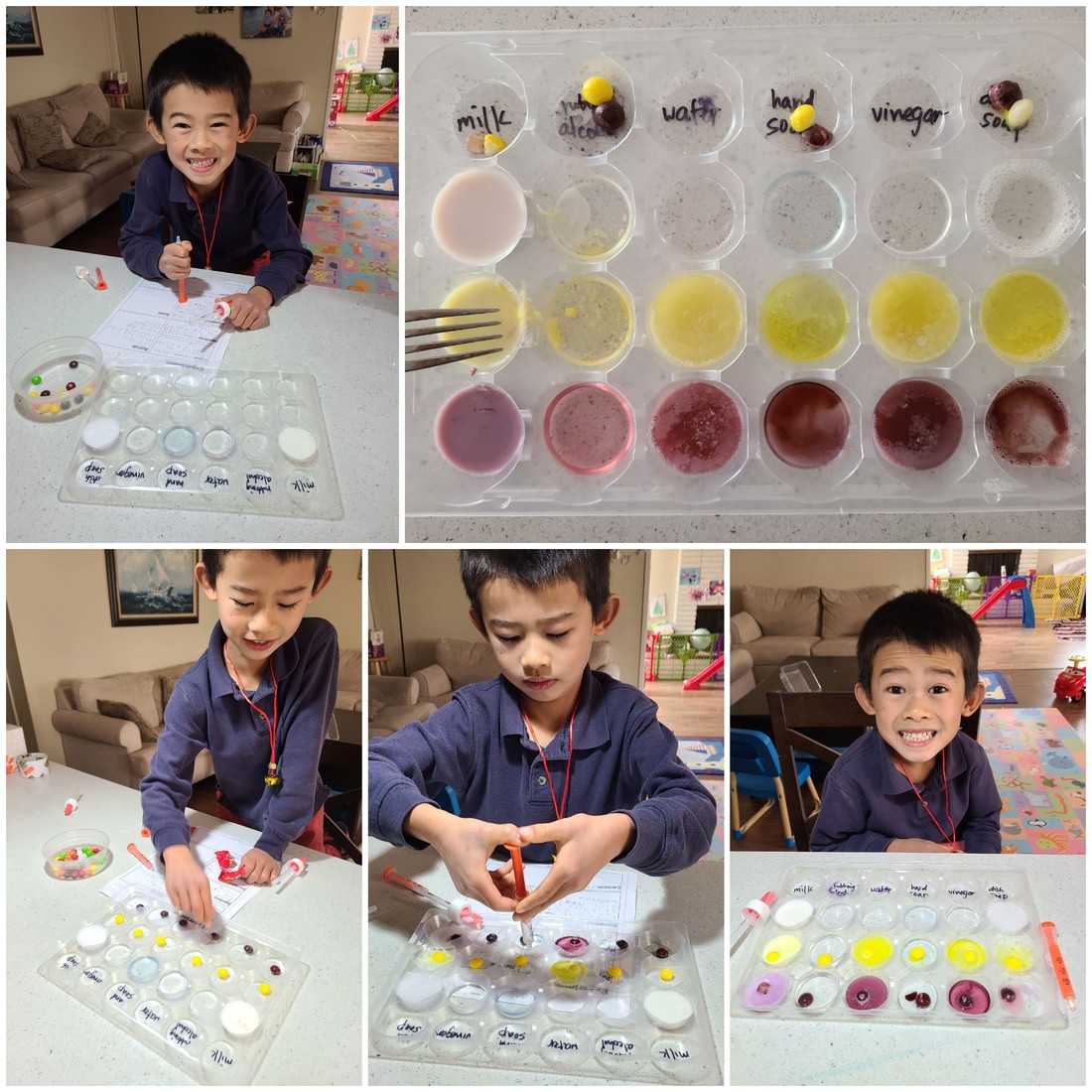 "Everything else being equal, the denser the wax, the longer the candle burns. Thus, burn rate is correlated with density and, in this sense, beeswax is king! Or should I say, queen : )" 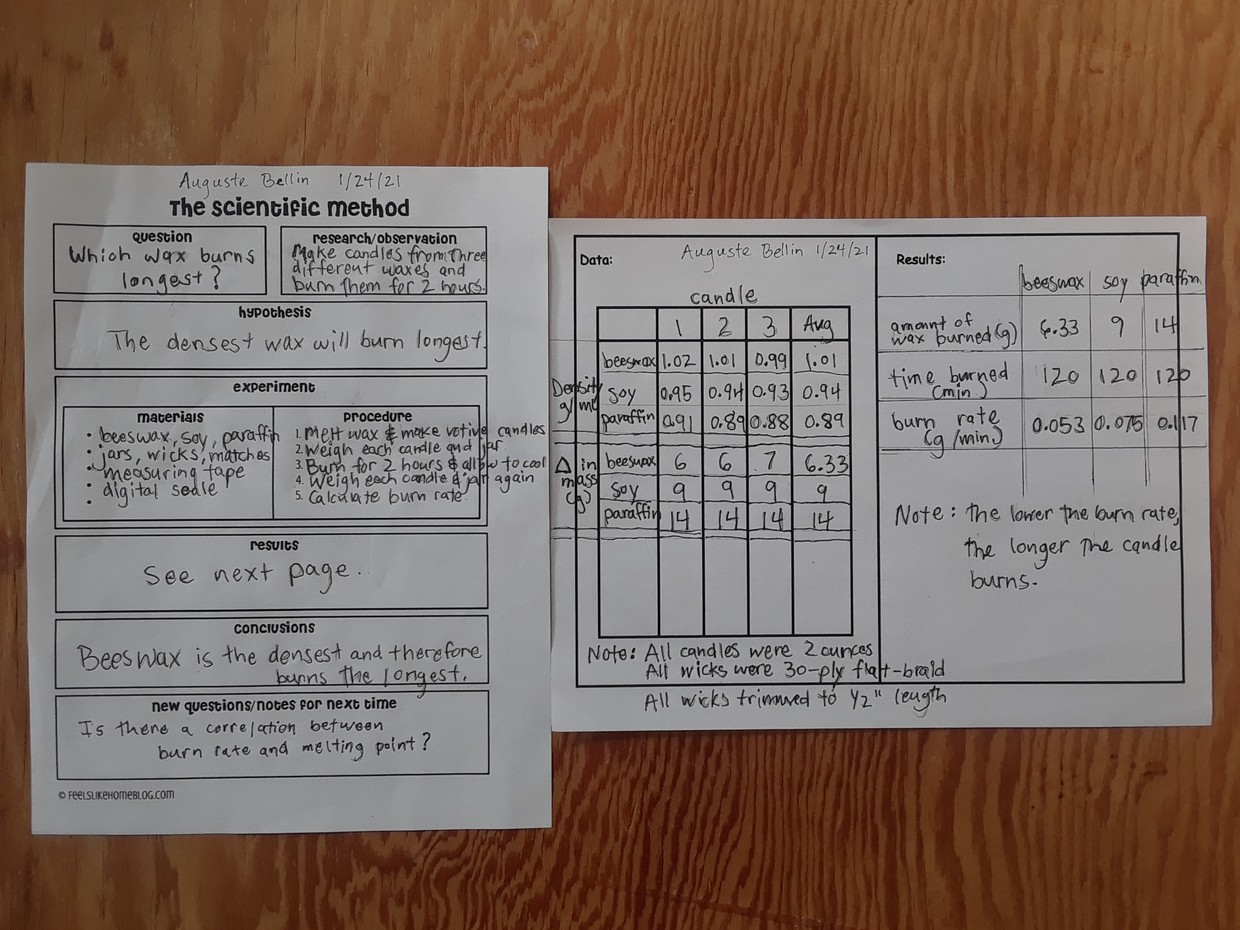 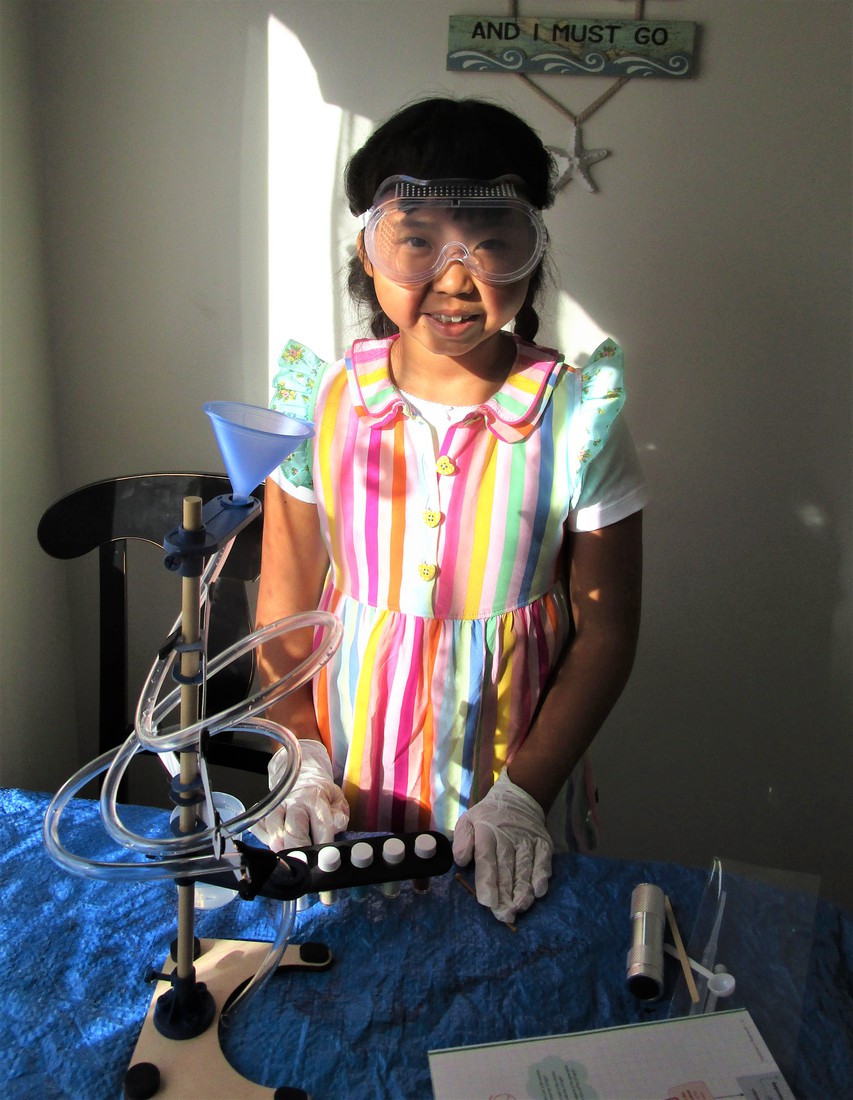 "Hypothesis: I thought Coke was first and the vinegar was the second best. I thought coke was going to be the best because it has a lot of acid in it.

Conclusions Barkeepers Friend is the best because it cleans really good- they are shiny and it is fast. Vinegar made them clean but ruined the penny. Coke and Ketchup were kinda the same." 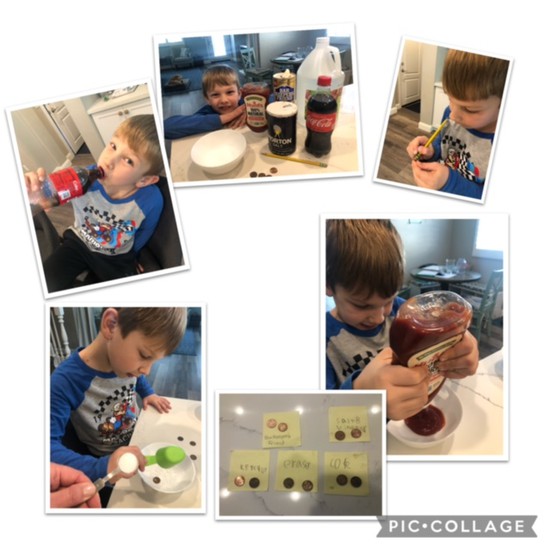 “How do we measure a tree that is taller than we are? New Prediction: 11 feet tall Plan: Stand Facing tree, turn around, put head between legs and with straight legs, look towards the top of tree. Walk away from tree a little more and try again until you can see the top of the tree (from view between legs). Mark the spot on the ground and measure the distance between the ground to the trunk of tree. (Creating roughly a 90 degree angle Triangle) Conclusion: Tree is 15 feet tall" 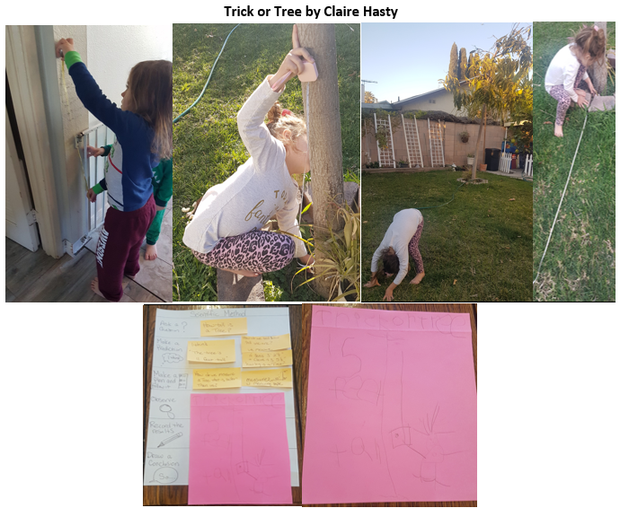 Soil Battery: How to Turn Produce into Soil Power (Cheng-Hsun had 3 hypothesis! We are only presenting one here).

"My first hypothesis is that silt soil will have the highest voltage; the second

highest in Sandy soil. Sandy soil will have a higher voltage than Peat soil. I think Silt

is the highest because of its density and what it’s made from. The result was sandy

being the highest, silt is second and peat is last. According to the results, it is

different from the hypothesis. I think that maybe sand has more organic matter than silt at the beginning." 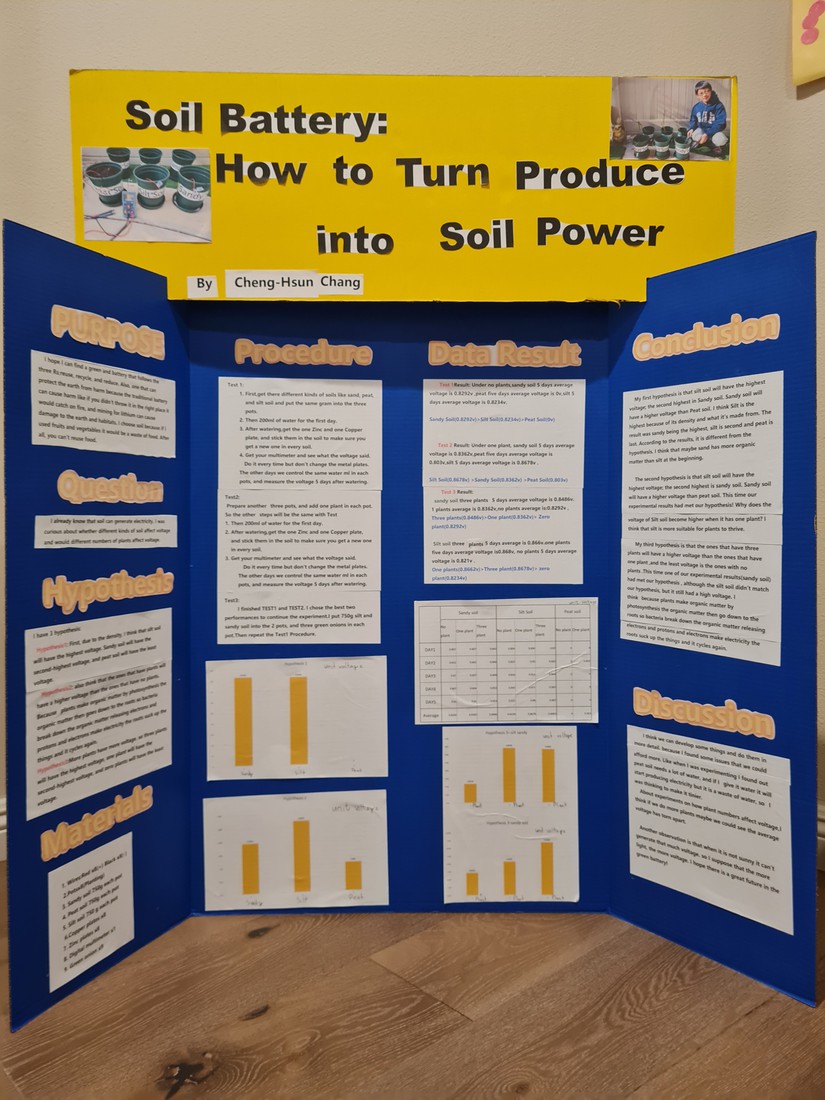 All about Electrolytes and experiment: what liquids are electrolytes. 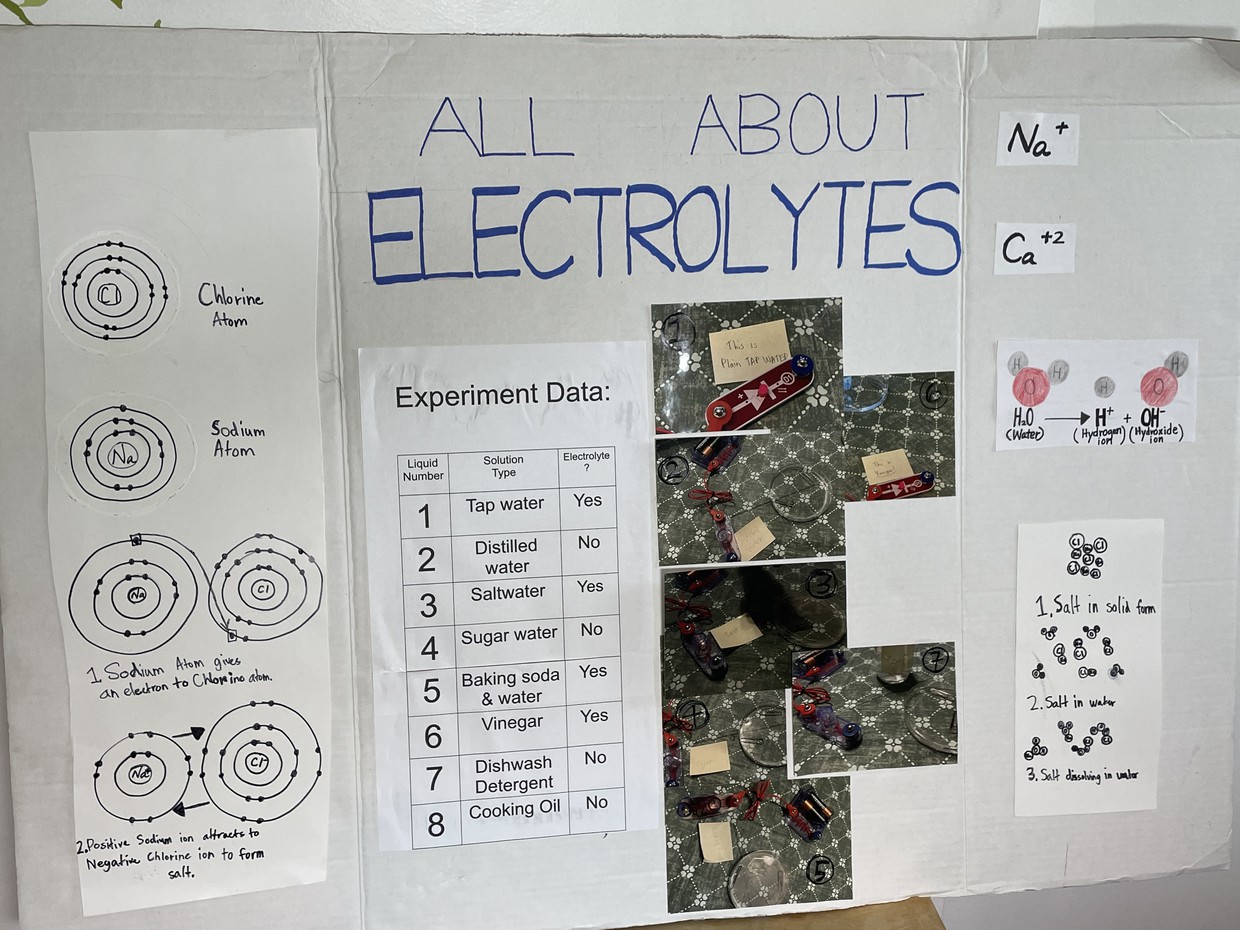 My Catapult - How Far Will the Objects Fly? 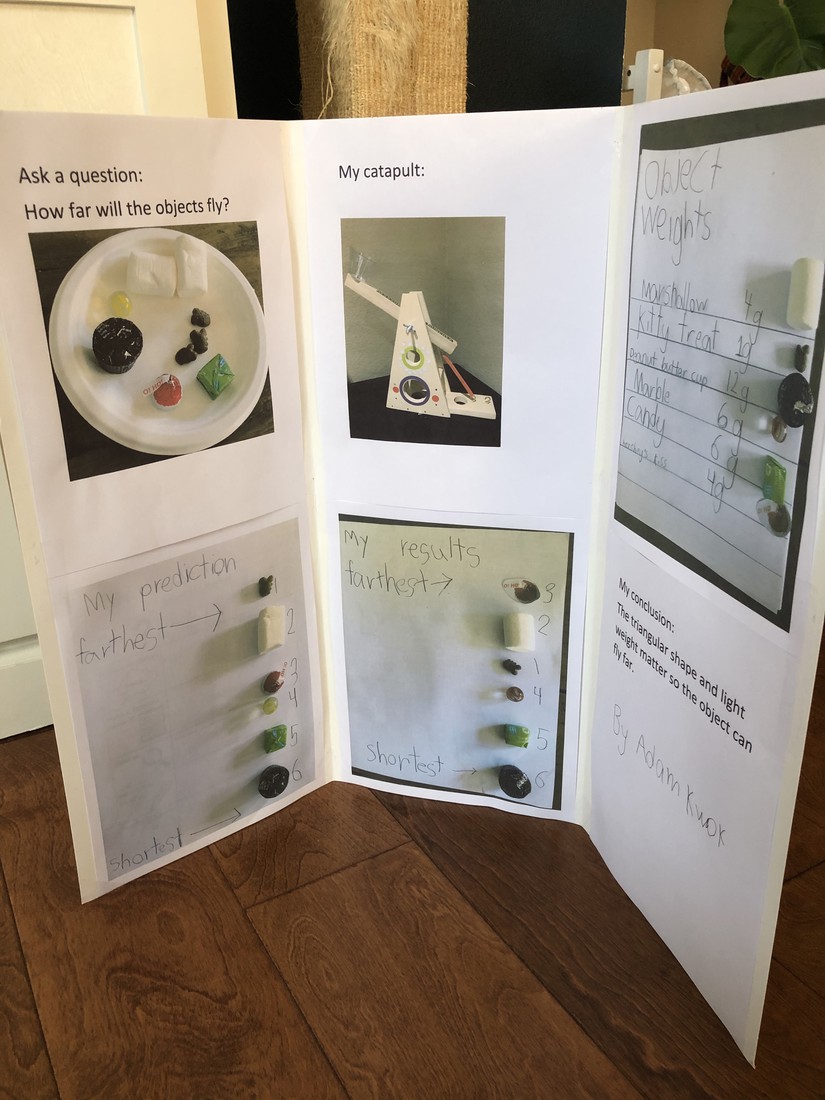 "Cyrus stated his hypothesis. The more energy exerted, the more the height of the wave (amplitude) would increase.

Conclusion: The hypothesis was correct. He tabulated the measurements for three different energy taps and recorded them in his data table." 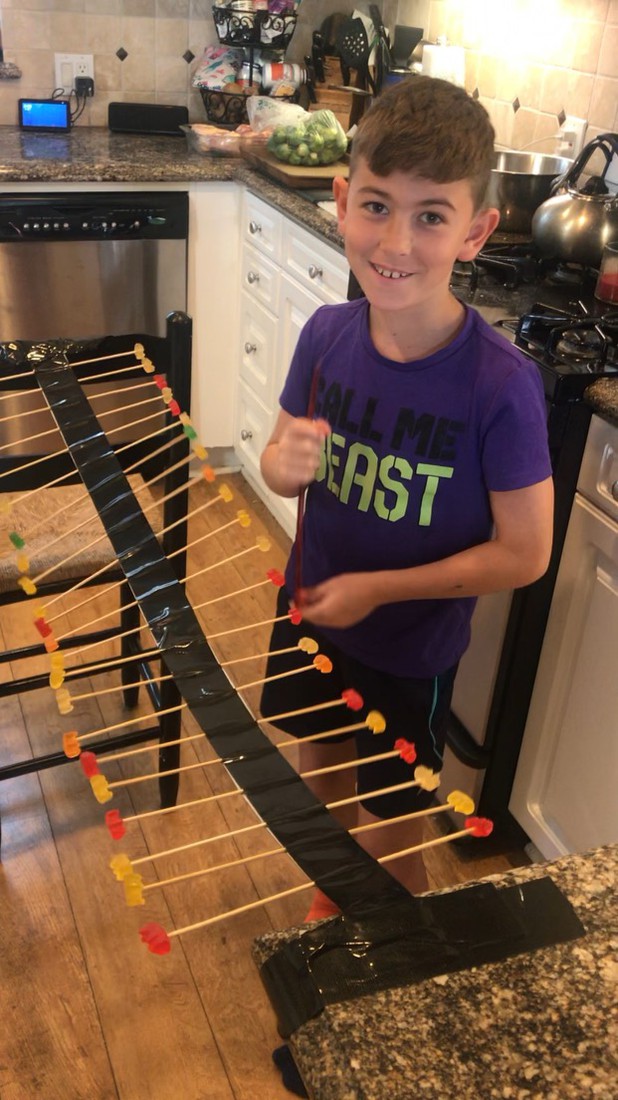 Do liquids expand when frozen?

"They believed the juice will be the only liquid that will expand when frozen while the other liquids will not expand when frozen. Their conclusion was that all liquids except for salt water froze and expanded. They learned that most liquids freeze when in the freezer and will expand." 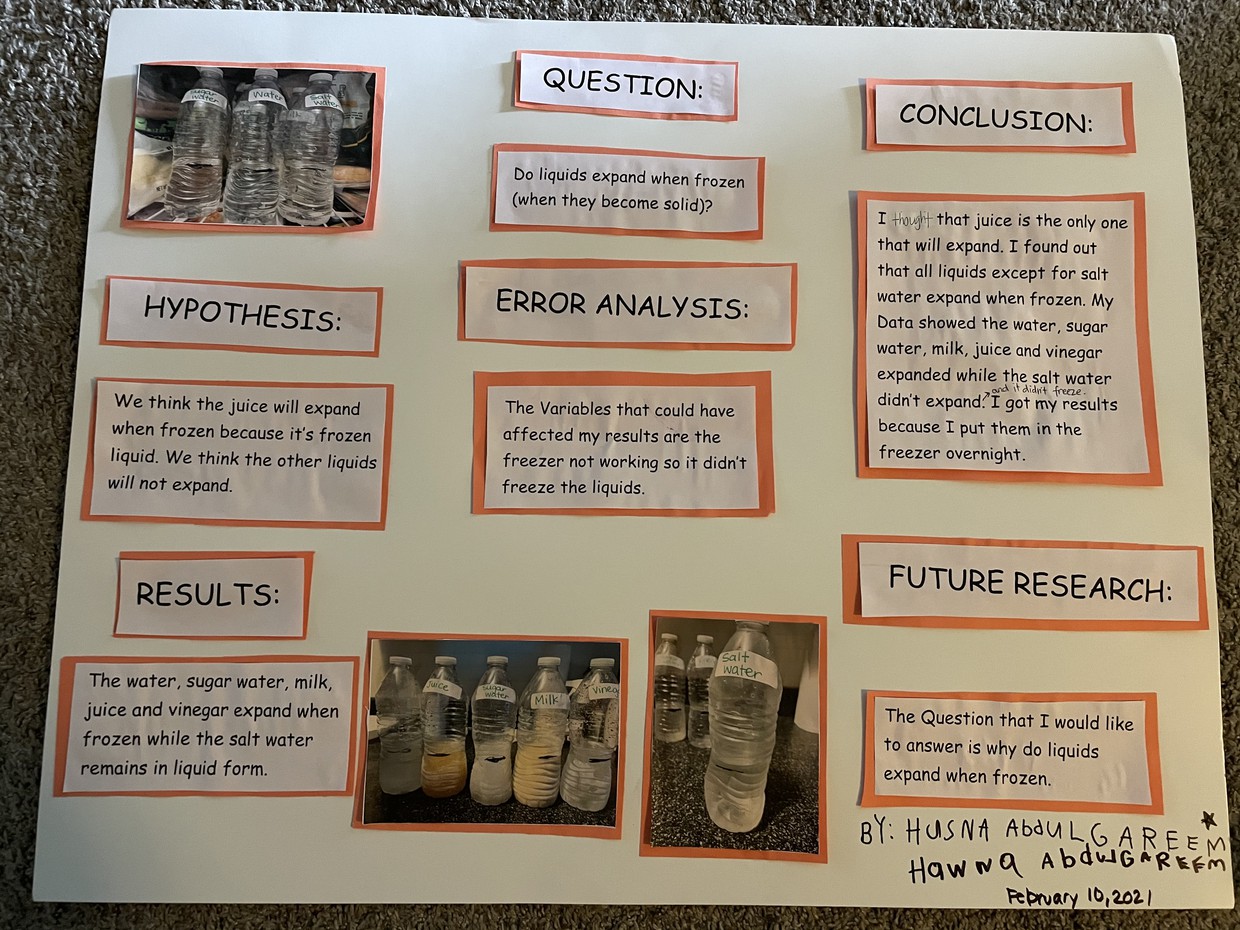 How does the use of electronic media affect the tolerance of pain?

"Rebecca researched if using video games and television as a distraction during painful stimuli reduced pain for participants in her experiment."

"I thought that the activity the person liked best would let them tolerate pain the longest. I found that most people could last longer with television. Several subjects reported that it was too hard to concentrate on the video game. Some subjects reported that the trials got easier as they went on because their feet got used to the cold and it wasn’t as shocking. We tested no distractions first, video games second, and tv last. My data showed that all but one person did best watching television." 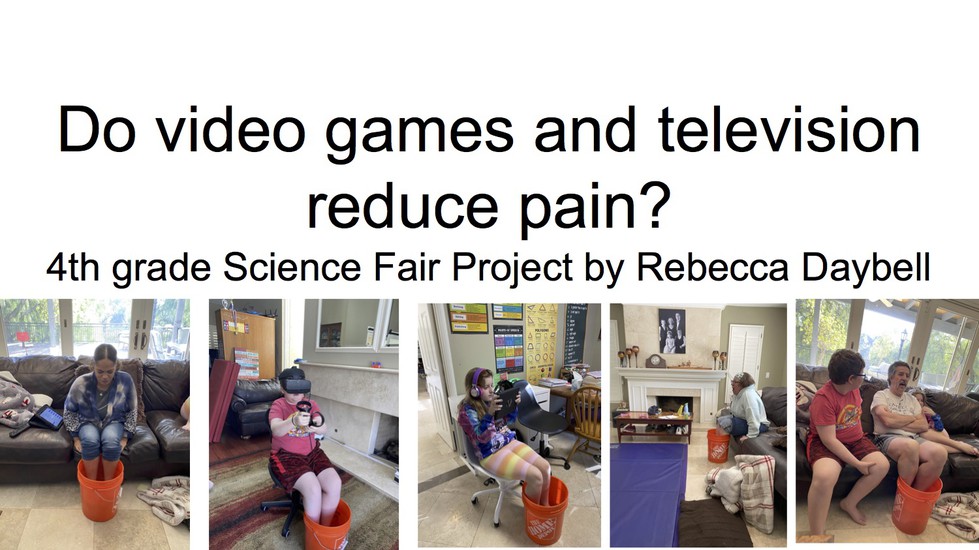 Mix Colors With your Eyes 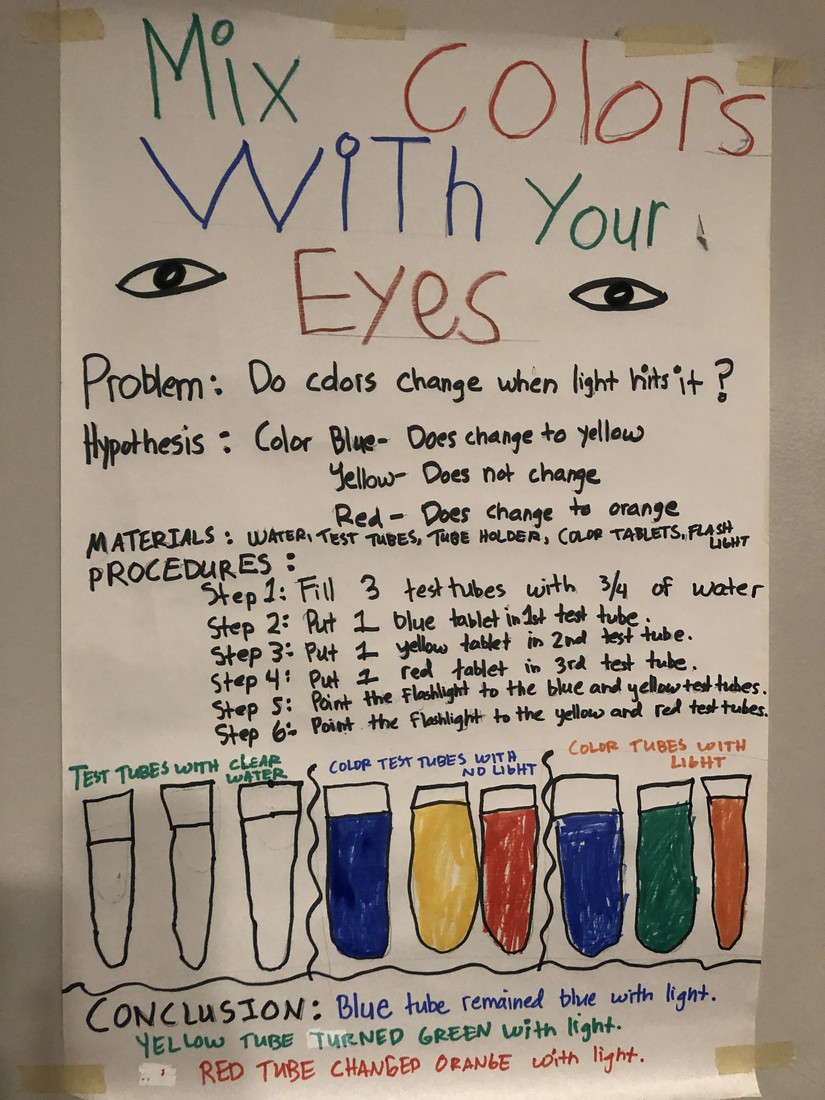 "The project was to compare glue sticks. George had predicted that the two glue sticks would be the same. George glued a variety of objects using each glue. The Elmers glue stick held much better holding all the tested items in place while the Bazic glue stick did not hold the beads after the glue dried. George recorded his details and based on his results he has decided Elmers glue stick is proven to be the stronger glue stick of the two." 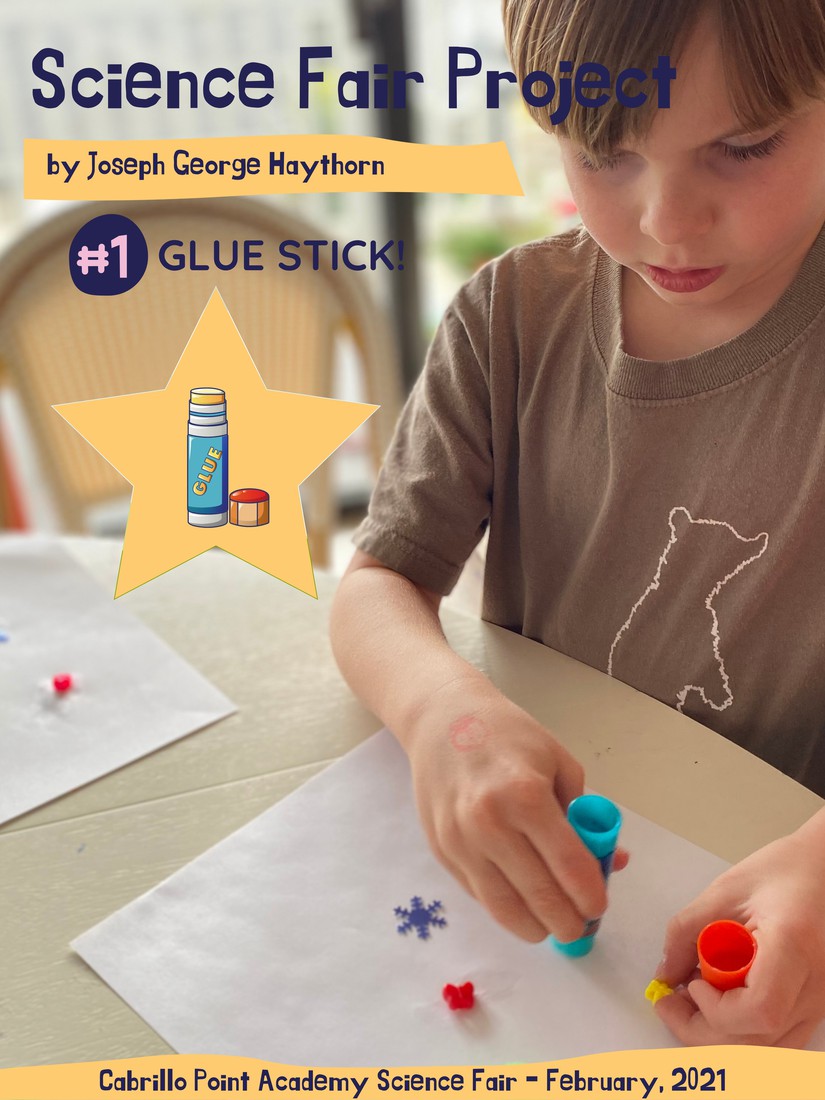 Which boat can hold the most pennies?

"Hypothesis: She thought the biggest, widest boat would hold the most pennies.

Conclusion: She was right! The biggest, widest boat held the most pennies. The most narrow boat, the canoe, held the least amount of pennies. What she learned: The wider the area of the boat displaces more water beneath the boat, so it can hold more pennies." 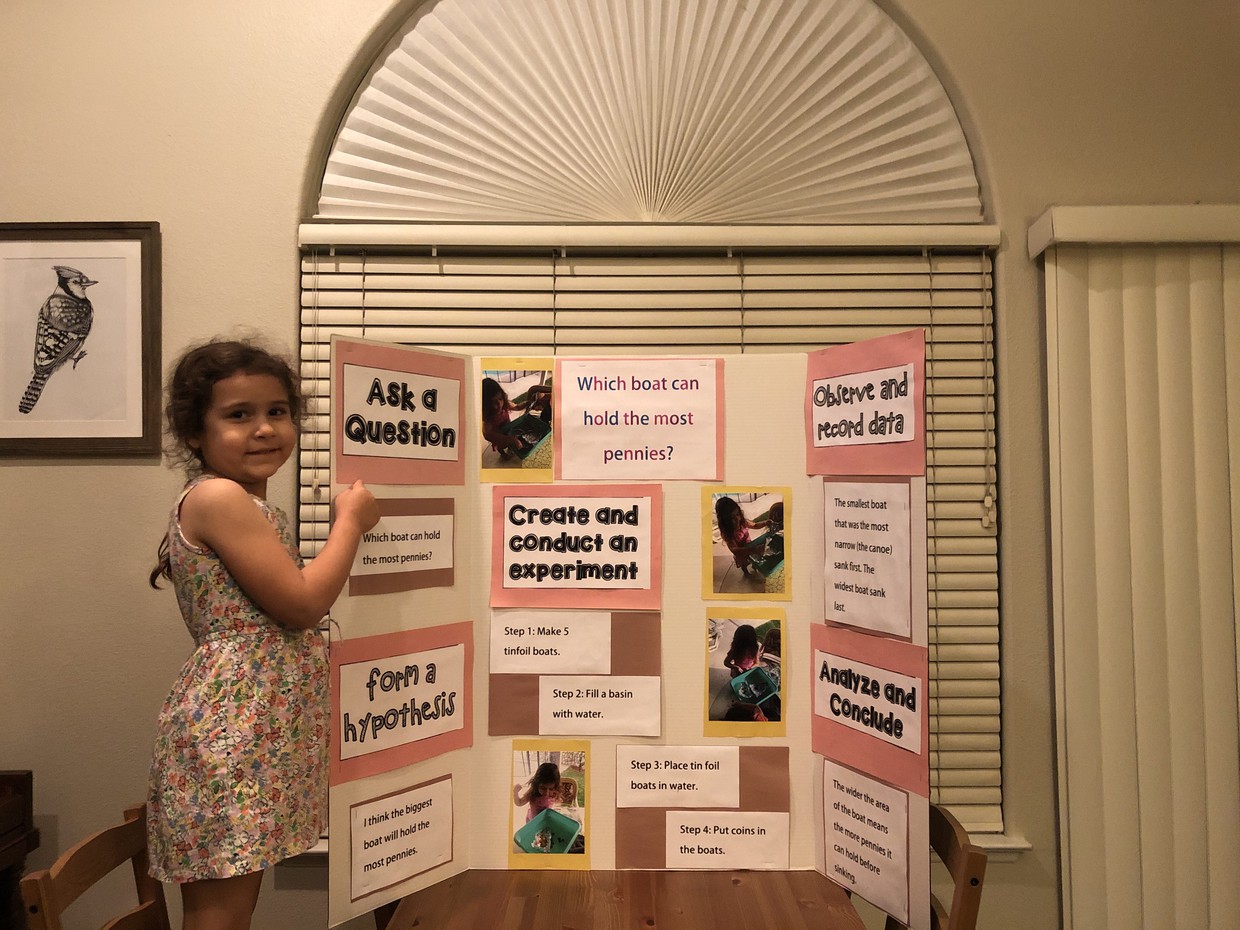 "I think that the tile would absorb the least kinetic energy. I think this because it is loud when you bounce the ball and it is harder than other surfaces.

The tile absorbed the least kinetic energy. I know this because the ball bounced higher than all the other surfaces"

Which liquid dissolves the peeps the fastest? 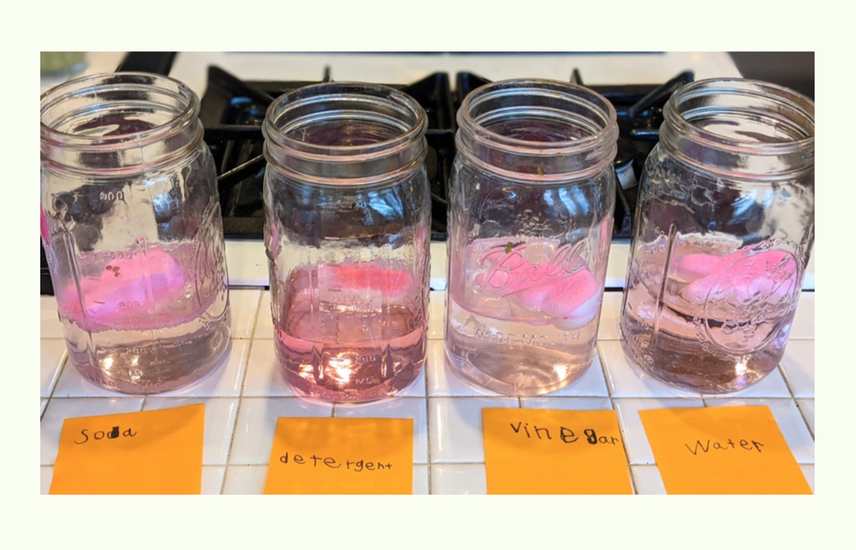 Result: Water, moist soil and moist cotton ball all sprouted well in one week. Air (control), sunflower oil, olive oil, vinegar, and dry soil did not grow. Light seeds floated on the liquids, but the heavy seeds did not. Conclusion: water is necessary for sprouting of radish seeds. Learned: soil is not one of the needs for sprouting" 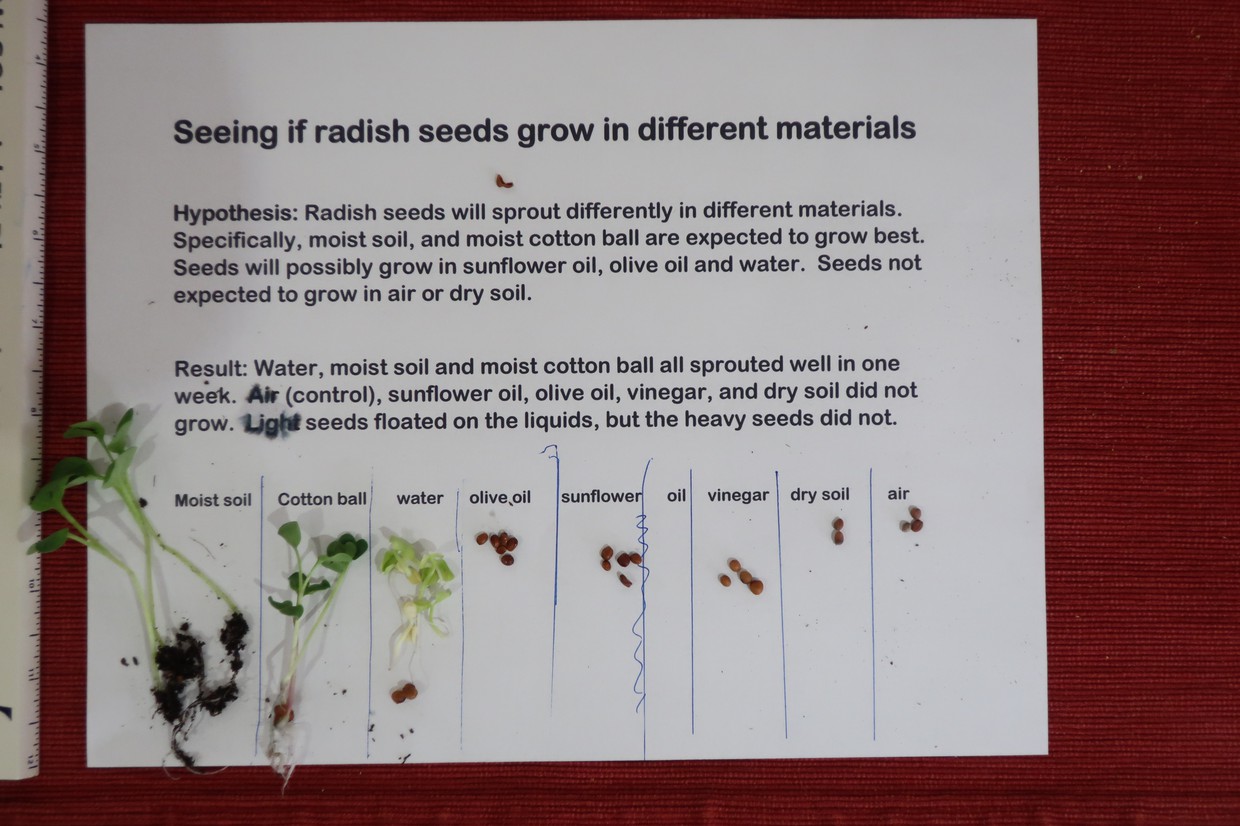 "Hypothesis: I think it will turn into crystal form by day 5. Conclusion: Crystal didn't form it may need more time and maybe some sun to dry up the liquid. Learned: I learned that you when you mix things together it causes a chemical reaction. Also, that things can change from liquid to solid form." 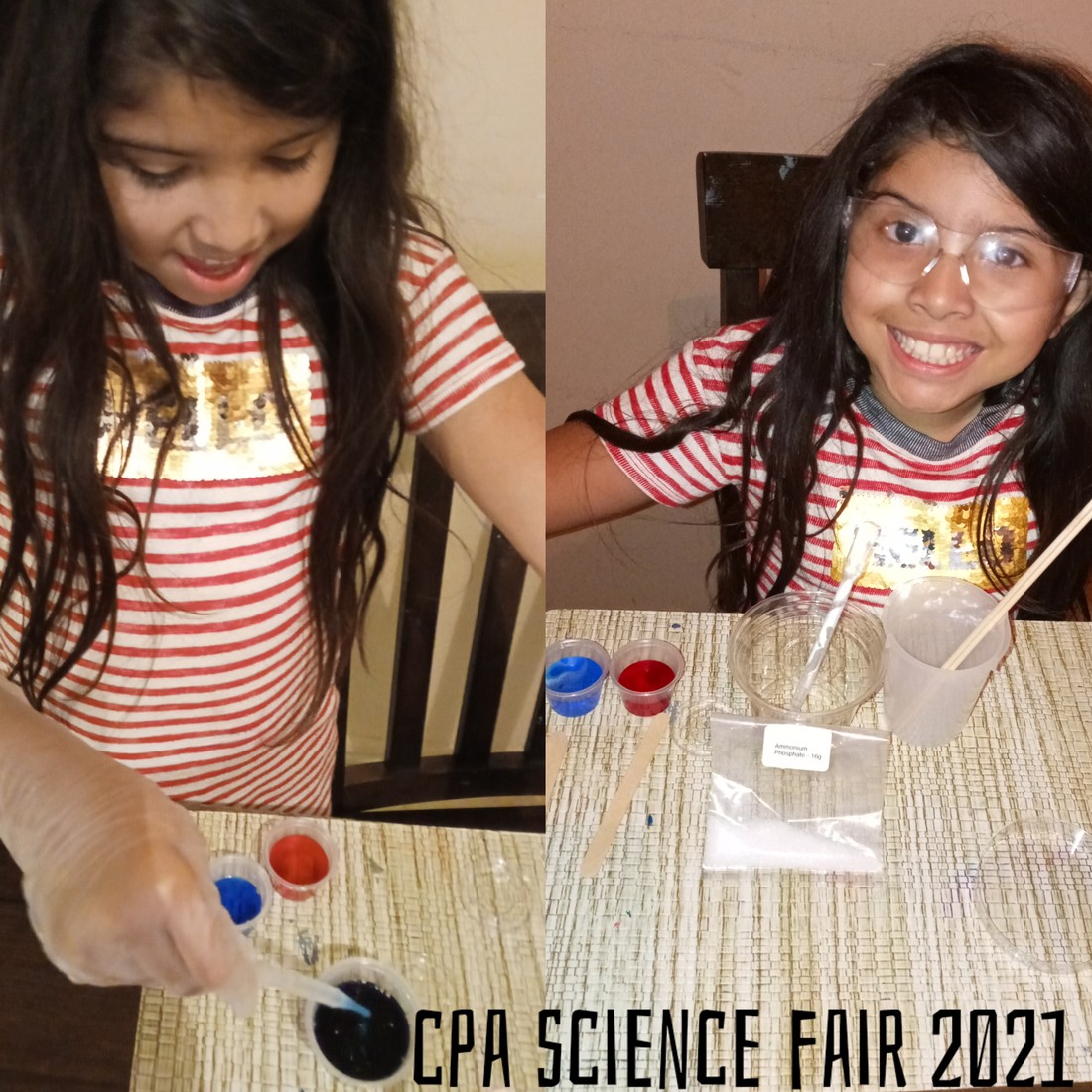 "Hypothesis: The hot air will take out the balloon from the jar. Conclusion: Warm air rises and cold air creates more pressure. Learned: Cold air pushes the balloon down because hot air tries to escape the jar." 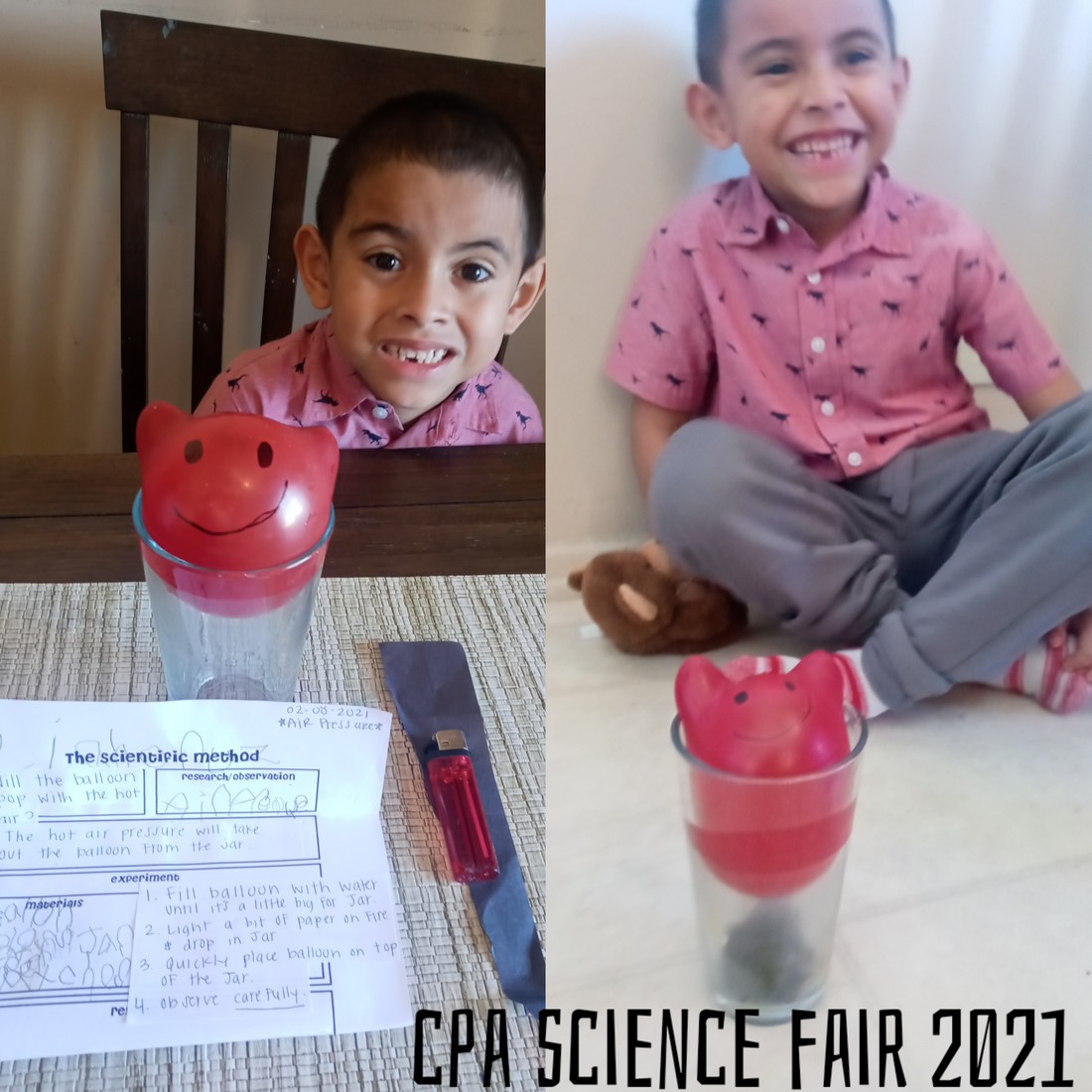 "Alex learned, how to mix ingredients and quantities to make the lava and eruption. He also learned about different volcanoes eruptions." 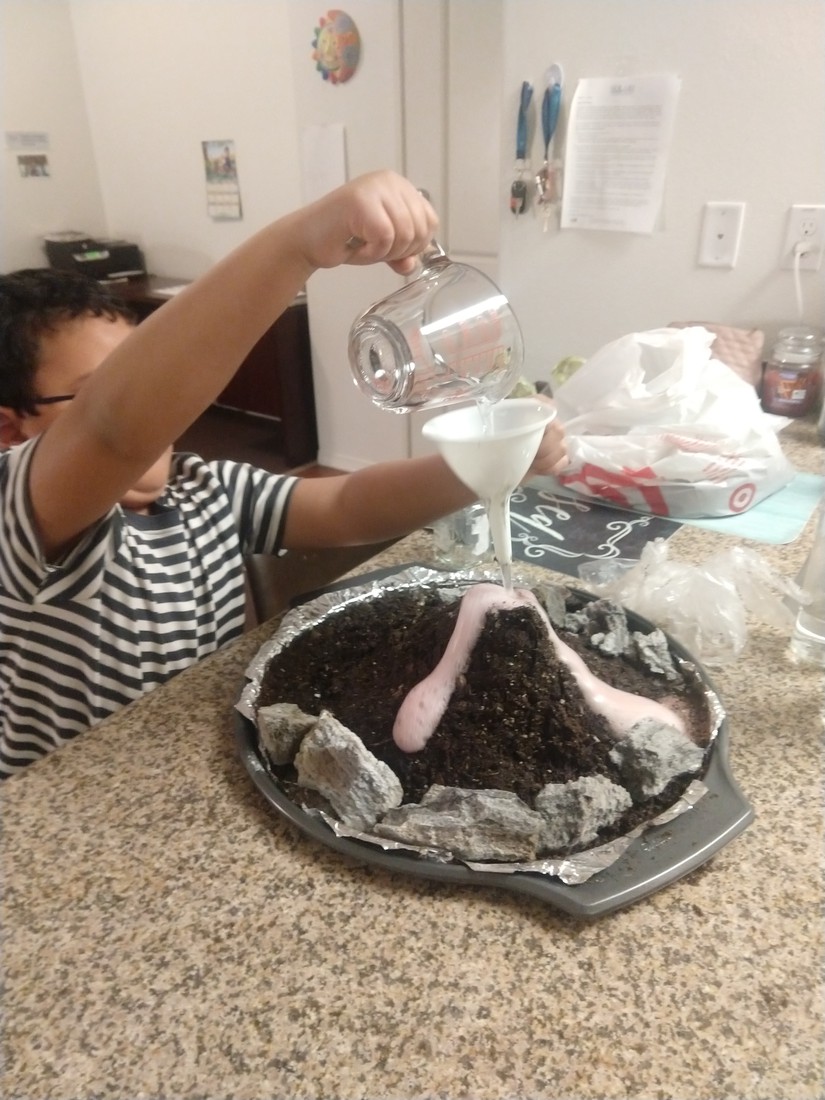 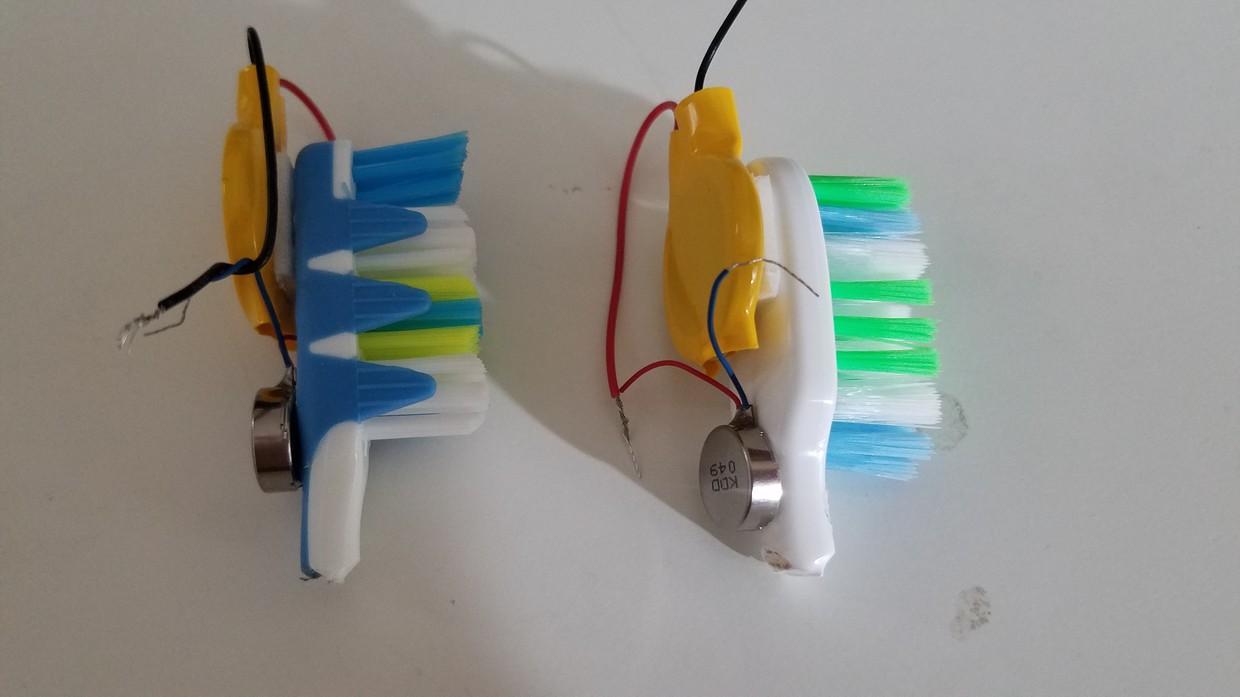 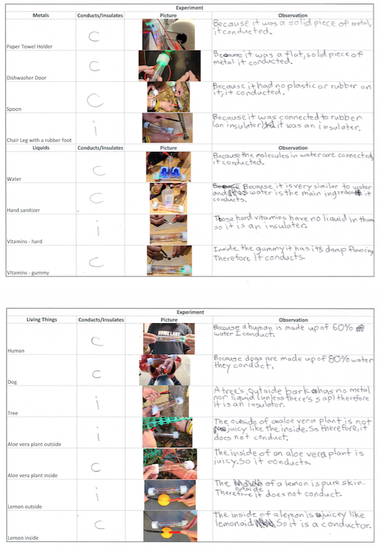 "He thought it would explode/pop. After many times it would shoot up and the fizzy water exploded out. He learned that chemicals under pressure make a bang." 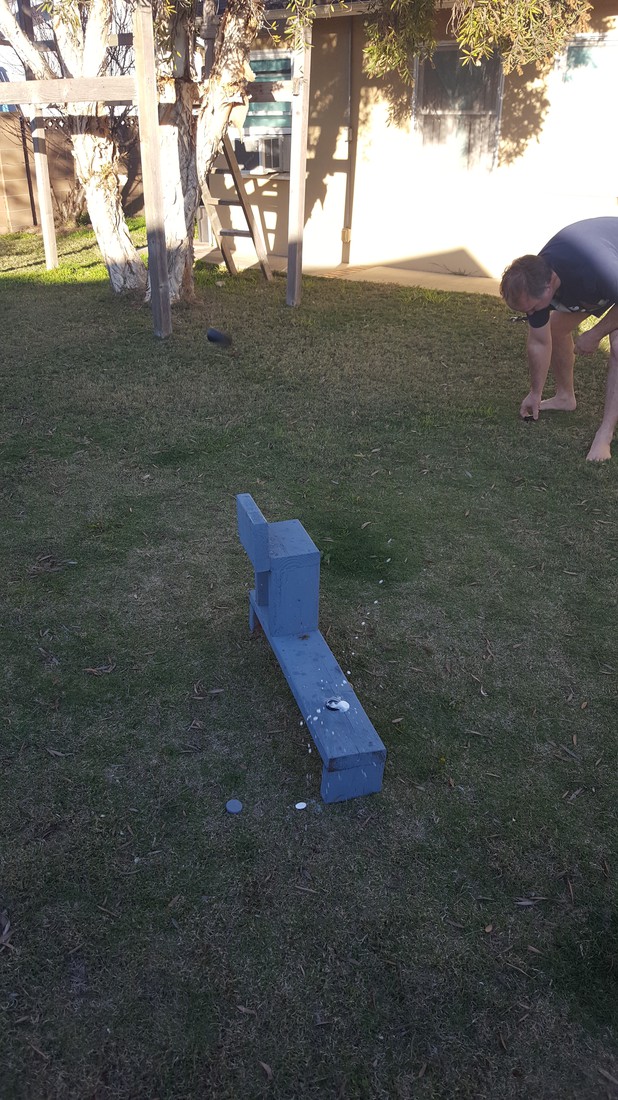 Test Track: The Science of Superspeed- How does the type of surface material on the ramp affect the speed of the toy car?

"Student thought the yoga mat would be the fastest, however the plain wood was the fastest. He learned that the more friction the slower the car can go and the less friction the faster it would go." 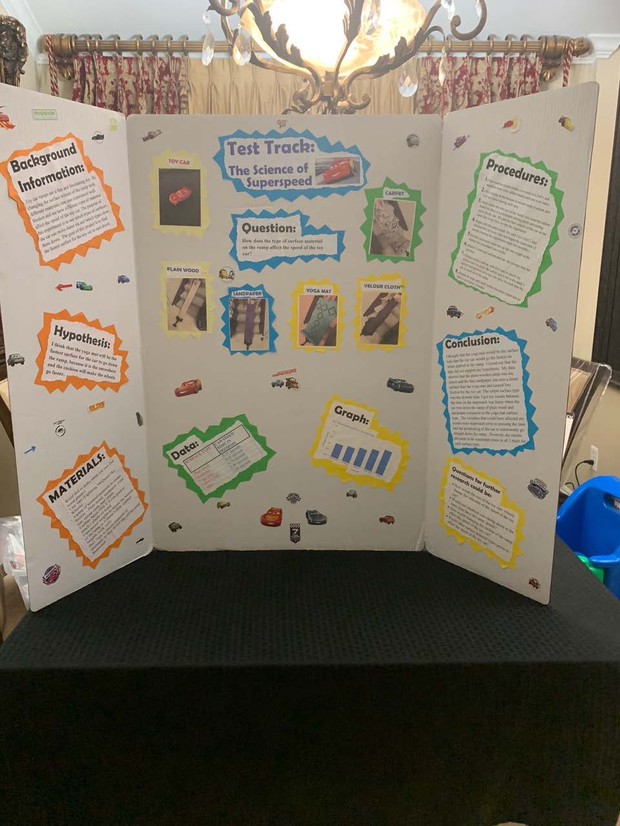 "Question: How do we get clean water? Prediction: I can make a filter to clean muddy water enough to drink. Plan: Layer coffee filter, sand, rocks, sand, rocks, and crushed leaves into contained (water bottle). Pour muddy water into filter container and use a cup to collect “filtered water”. Results: Water went in muddy and came out less muddy. Conclusion: This water is not clean enough. I would not drink it. Maybe if I was stranded, I would boil it next if I really needed water. Yea, I’d still boil it. There might be some kind of germs in there." 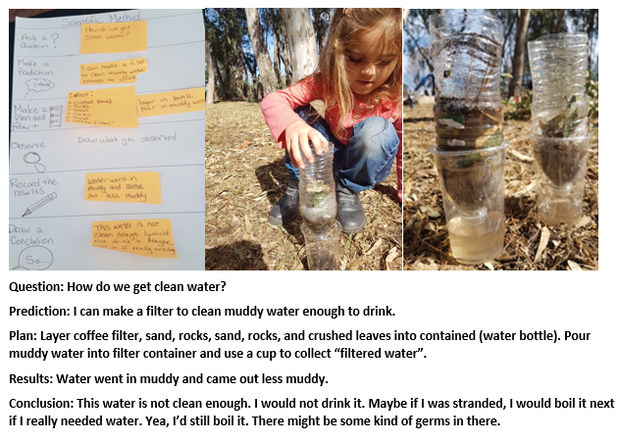 Kimmi is using Smore newsletters to spread the word online.

Follow Kimmi Buzzard
Contact Kimmi Buzzard
Embed code is for website/blog and not email. To embed your newsletter in a Mass Notification System, click HERE to see how or reach out to support@smore.com
close