Daniella is using Smore newsletters to spread the word online.

Get email updates from Daniella: 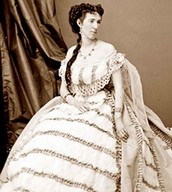 When the Civil War was occurring there were lots of women who made important contributions that were either working for the Confederate or Union army. Belle Boyd was one of them, she was a Confederate spy. Belle Boyd was born on May 9, 1844, in Martinsburg, Virginia now considered West Virginia. Her father was Benjamin Reed Boyd and her mother was Mary Rebecca Glenn Boyd. She began her job as a spy at the age of seventeen, she delivered information about Union plans to the Confederate general Thomas "Stonewall" Jackson. Belle Boyd got arrested for visiting Union headquarters about four or five times. She wrote an autobiography describing life in prison. Belle Boyd died on June 11, 1900, at Wisconsin Dells from a heart attack.

I am Daniella Vilchez, sixth-grade student from the school Mary G. Porter Traditional School, located in Woodbridge, Virginia. I am writing this letter to inform you about a statue I would like to construct for the famous spy; Mrs. Belle Boyd at The National Civil War Museum. This statue should be build to honor the contributions she has done for us. Mrs. Boyd is very significant in our history because she had an occupation for being a spy for the Confederate Army in the American Civil War. A spy is a person who secretly gathers information about an enemy or a certain group and reports back to their leader. Belle Boyd would investigate about the Union's plans towards the Confederate Army and report back to General Stonewall Jackson. Belle Boyd was born on May 1844 in Martinsburg, Virginia, into a slave-owning family. She began working as a spy at the age of seventeen. She would do anything to get to get to her goal of delivering information to the Confederate leader, including delivering information while a battle was occurring. Belle Boyd was a very helpful woman towards the Confederate Army when it came to spying.

Hopefully, I will get authorized to complete the project I intend on working on to honor this brave woman in history.

In memory of a woman who took on a dangerous job. Mrs. Belle Boyd was a very famous spy working for the Confederate army. Born in May 1844 in Martinsburg, Virginia. Delivered her important information about the Union Army's plans to the Confederate Army general, Thomas "Stonewall" Jackson during the year 1862. She began her career as a spy at the age of seventeen as she saw that three of her family members were found guilty of being Confederate spies. Being a spy was a very dangerous job for a woman, but Belle Boyd would do anything to deliver information. Belle Boyd was one of the people who helped shape the world.

The statue I plan to build will be located at the National Civil War Museum where important people who made big contributions during the Civil War are honored. Belle Boyd's statue would be holding a bag which represents letters or notes she took while investigating at the Union headquarters. She would also be wearing a big dress which represented how people dressed in the early 1800's. The statue would have an informational message at the front to tell visitors a little bit about the Confederate spy, Belle Boyd. 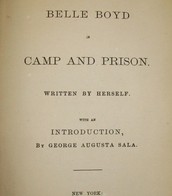 Daniella is using Smore newsletters to spread the word online.