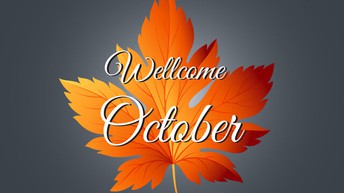 Welcome to October! This is our last month for house tours, happening every weekend from 2:00-4:00. Come check out Meadow Croft and see all of the updates and displays.

Join us for our October General Membership Meeting featuring speaker Chris Kretz. Chris will be speaking about Long Island and the Spirit of the Times in the early 1800's. The meeting will be held at the BBP Library on October 16th from 2-4:00. Light refreshments are served. All are welcome!

Before the great estates and the Gilded Age, Long Island was a rustic sportsman's paradise. Nowhere was this more evident than in the pages of the Spirit of the Times, America's first popular sporting magazine. This talk will present Long Island as it appeared in the pages of the Spirit - the taverns, the woods, the racetracks - as well as the lively characters that frequented them.

We're Back! Tour 6 magnificent homes in Bayport and Blue Point, plus Meadow Croft Estate, summer home to the Roosevelts.

On October 23rd, 2022 from 1:00-5:00, beautiful historic homes will be on full display! Tickets are $30.00 pp and will go on sale starting October 1st at these locations: BBP Library, Bayport Flower Houses, and at the Meadow Croft Estate (only Sat & Sunday from 2-4:00). There are a limited number of tickets available so don't delay!

Please note that out of respect for the generous homeowners, children under 12, pets, high heels, cameras, and food and drink are NOT permitted. Thank you!

For more information, check out our webpage www.BayportBluePointHeritage.org 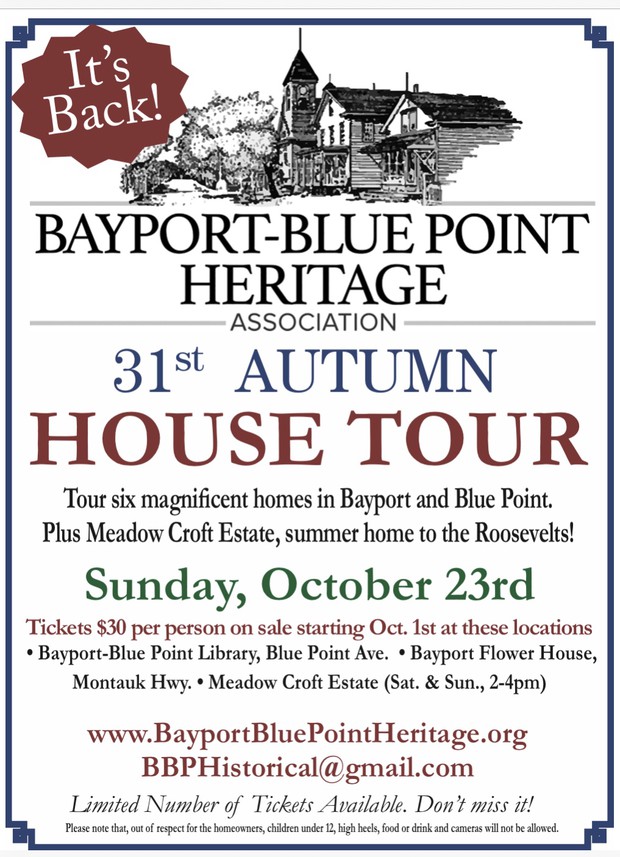 On Saturday, September 17, our own Frank Giebfried led the first of what will be many historic bike tours through the twin communities of Bayport and Blue Point. About twenty riders participated in the approximately ten mile tour that went from Meadow Croft on the Bayport/Sayville border to Bergen Lane in Blue Point. There were many stops along the way that showcased the rich history of our area.

The group visited many Bayport locations, including the site of the former estate of Julius Liebman, brewer of Rheingold beer, the home of Broadway actress Effie Shannon, and the building that once housed the Moonrise Restaurant, run by German immigrant Ma Moon. One of the highlights (or lowlights) was what might be the final visit to 19th century bottling titan John Morgan’s mansion on Ocean Avenue before it crumbles to the ground.

Blue Point locations included the former sites of the South Bay House and Avery’s Five Mile Look, with its beautiful view of the Great South Bay. Bergen Lane’s rich history was also enjoyed, as riders learned about Dr. Raymond Davis, co-winner of the Nobel Prize in Physics, and Maud and Ballington Booth, founders of the Volunteers of America.

Special thanks to Mary Bailey and Jennifer Economos for guiding our riders along the way. And thanks to Bill Bailey for designing and mapping our route. 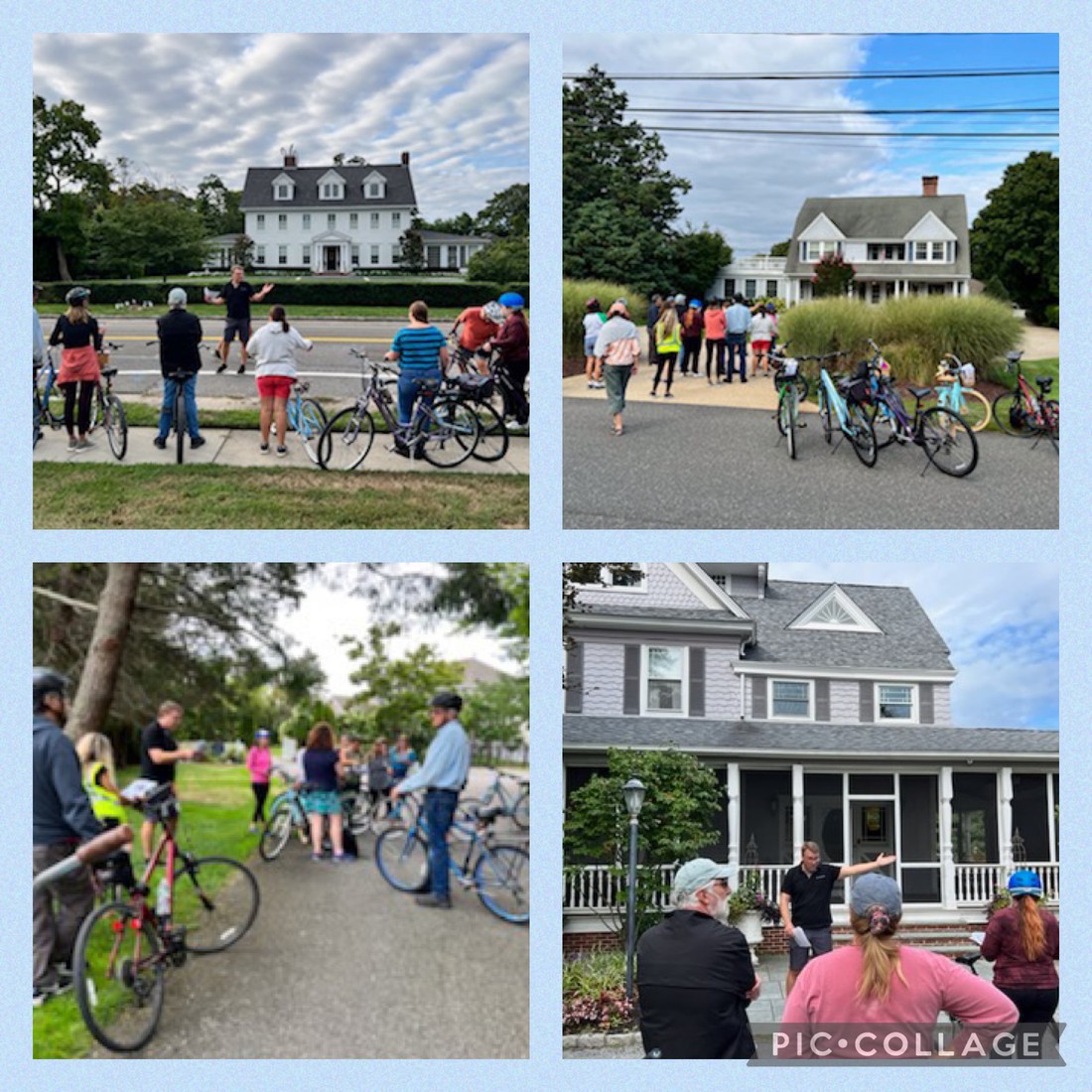 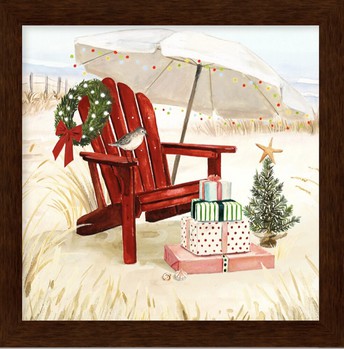 Save the dates! December 3rd & 4th 2022 for this year's theme; Christmas by the Bay! Planning is underway and volunteers are needed. Also we need pianists to volunteer their time for an hour or so to play on the Roosevelt piano. If you are crafty or have any unusual displays related to our theme and would like to be involved, please all our chairperson Leanne Berg at 631-235-1702.

These articles were first printed in the Bayport Blue Point Gazette. They were written by Gene Horton and reprinted here with permission.

Take a drive up Sylvan Ave. in Bayport and look for this beautiful new sign outside the historical home and agricultural business now known as "The Sunshine Shop." The property now owned by John and Anne Zelenka at 482 Sylvan Ave., Bayport, north of the Montauk Highway, was part of the Nicolls Estate that was originally inhabited by the Indians who lived in this area.

In the year 1975, John & Anne Zelenka bought the property and restored the house and greenhouses. The Zelenka family is still conducting the agricultural business that was established there in the early 1800's. It is known today as "The Sunshine Shop." It opens every year on May 1 and remains open until all of its home-grown plants are sold out.

John & Anne Zelenka researched all of the above information and have placed this beautiful historical sign on their Sylvan Ave. property. Dominic Savino of "Smart Signs" in Bohemia created and crafted this sign for the Zelenkas. 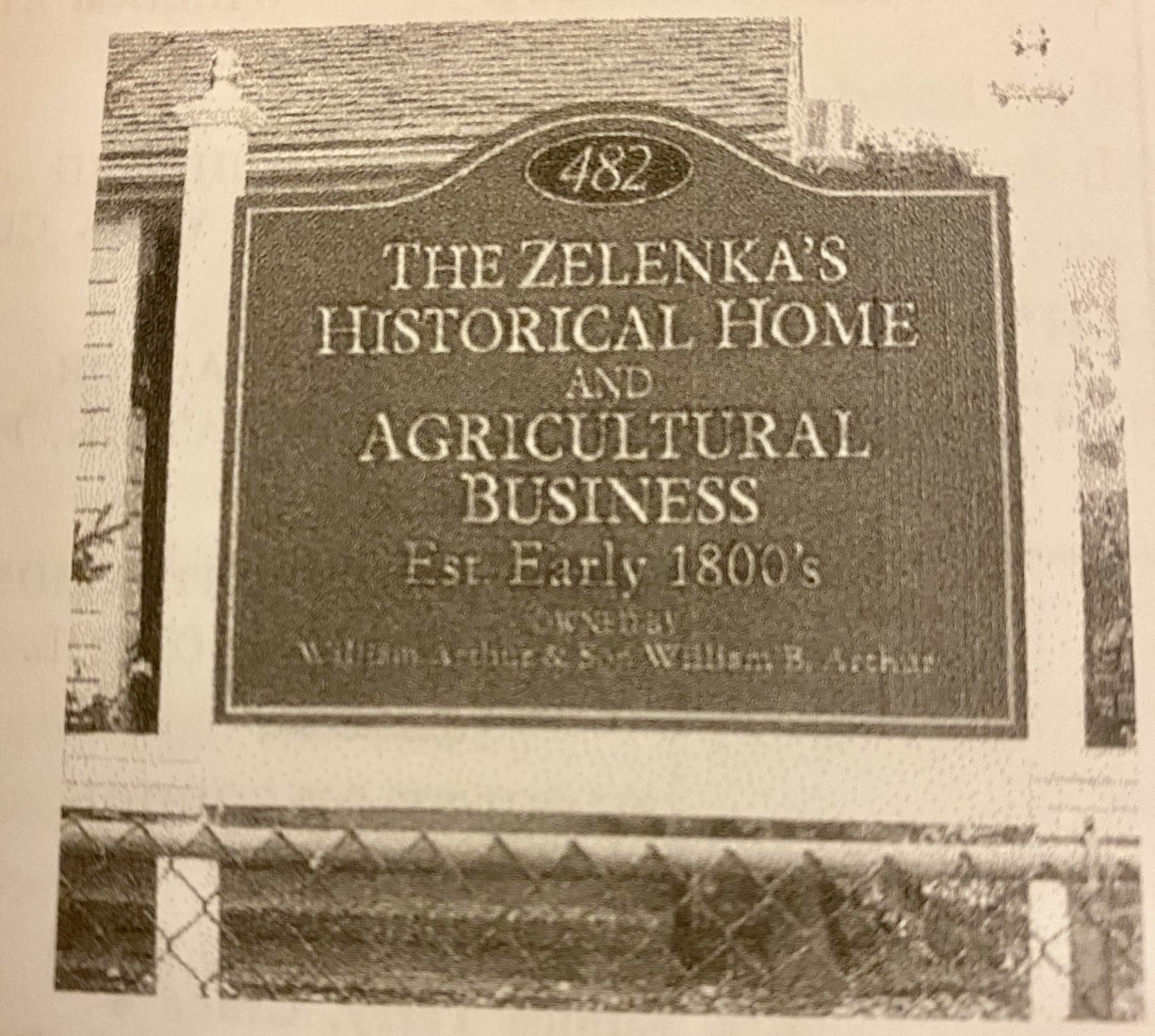 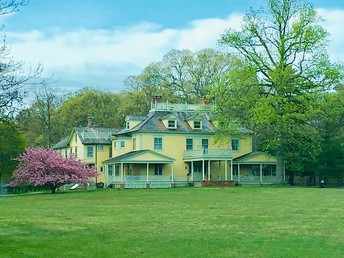