Reputation in "The Crucible"

Reputation in "The Crucible"

Reputation can be so near and dear to one that they are willing to lose their life to keep it. 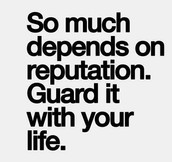 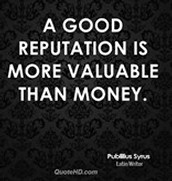 In “The Crucible” it shows how someone's reputation has an effect of his or her actions. For example John Proctor, he could had confessed to witchcraft and soiled his name in the town. But instead he decided to hang an innocent man. Towards the end of the play John Proctor says “Because it is my name! Because I cannot have another in my life!”. Meaning he would rather hang than have a bad name. “How may I live without my name?” He says to Danfourth, he would rather hand instead of his name representing lies.

Reputation means a lot in the village, “I have three children-how may I teach them to walk like men in the world, and I sold my friends?” Said Proctor. He would not be a good example for his children, because he would have sold his good name to keep his life. He also says “I blacken all of them when this is nailed to the church the very day they hang for silence!”. It would look bad for him to lie to save his life when his friends died for telling the truth. And that's why reputation can affect people some would die to save it.