Lobotomy; Lobotomy is a medical procedure that was practiced in the late 1930's well until the late 50's. Seen as taboo in today's society, lobotomy was the act of piercing the brain to disconnect nerve connections for the purpose of correcting psychiatric conditions.

"One Flew Over the Cuckoo's Nest" by Ken Kesey was a novel, later made into a movie, that brought lobotomy into the public light for the first time. In the novel/book a man named McMurphy is a convict who faked insanity so he could carry out his prison sentence in a mental hospital, but while in this mental hospital McMurphy is lobotomized. After the lobotomy McMurphy is left in a vegetive state. For many at the time, this was the only time the public had heard of lobotomy, and for some it is still the first thing thought of when hearing the word 'lobotomy'.

The NY Times had a very good article on lobotomies, and it specifically talked about a woman by the name of Eva Peron, who, at the time, was the First Lady of Argentina. In 1951 Eva fell ill with a complex case of cervical cancer, but the doctors didn't tell her it was cancer, they simply told her it was a uterine problem. Her illness was such a secret that a doctor operated on her without her even knowing. Her cancer worsened, and it's said that Eva had received a lobotomy to control the pain of her cancer. Only after she died did the public become aware that she had cancer. This would be an example of when lobotomy did not turn the patient into a "vegetable" or become disabled as a result. This article had an influence over me because it was a true story of a woman who received a lobotomy and, as far as we know, did not had negative effects as a result. The article does not say if she gave consent to a lobotomy or not.

One of the most famous lobotomies was given to a boy at the age of 12 in the 1960's. Howard Dully is the youngest person to receive a lobotomy. When Dully was a boy he lived with his father and stepmother, Lou. Dully was a good boy, but Lou hated her step-son, she abused him physically and mentally, but insisted it was the boy that was the matter. She was eventually referred to Dr. Freeman, the father of lobotomies. Lou wanted to get Dully a lobotomy to 'deaden' his emotions. Dully's father signed off on the operation, not really caring what it was. Dully was given a series of electrical shocks to sedate him, "That much I remember," Dully says. Now in his late 40's, Dully is fully recovered from his lobotomy, which is considered a miracle. This article really had an influence about how i think about lobotomies. It's a miracle that Dully even survived the operation, much less recovered from it. Dully's story is amazing, and really makes the reader feel for him. Dully was also the first person to see a picture of his lobotomy. (seen below) 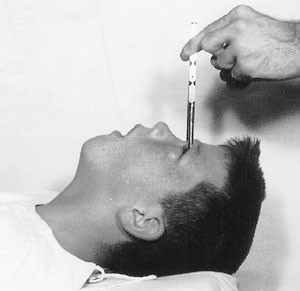 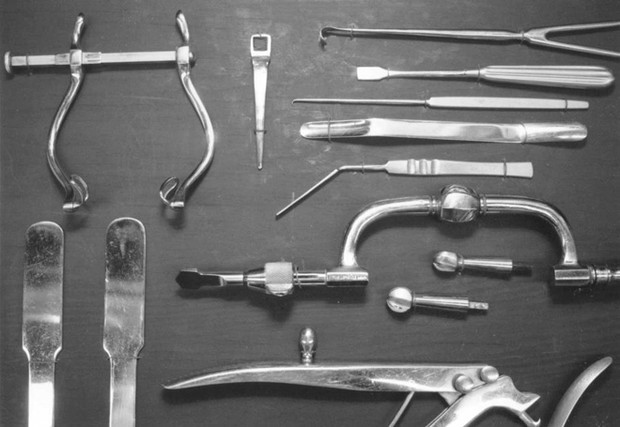 (Standard tools used in a lobotomy are seen above)