Neeha is using Smore newsletters to spread the word online.

Get email updates from Neeha:

10 rules for my utopian society

1. everyone human being should have a pet.

2. everyone should be friendly.

4. all kinds of food in all the fast foods, restaurants cost only 25cents.

5. Starbucks is free for people who help the society in any way.

6. no SAT/ACT system to get into any college

7. no homework for schools, only projects.

9. math is not one of the subject/course in your school.

George Orwell, pseudonym(a fictitious name) of Eric Arthur Blair, was born 1903 in Motihari, Bengal, India .His father was a minor British official in the Indian civil service; his mother, of French extraction. Orwell was thus brought up in an atmosphere of impoverished snobbery. Young Orwell was brought to England by his mother and educated in Henley and Sussex at schools.

The Orwell family was not wealthy, but the young Orwell had a gift for writing, which he recognized at the age of just five or six. Orwell studied the master writers and began to develop his own writing style. At Eton, his initial political views were formed. Orwell moved to Burma in 1922, where he served as an Assistant Superintendent of Police for five years before he resigned because of his growing dislike for British Imperialism.

In 1929, he moved to London, he came down with his first bout of pneumonia due to tuberculosis, a condition would plague him throughout his life. He and Eileen were he married in 1936, shortly before he moved to Spain to write newspaper articles about the Spanish Civil War.

When Orwell and Eileen adopted a son in 1944, Tragically, Eileen died in the beginning of that year, just before the publication of one of his most important novels, Animal Farm. Despite the loss of his wife and his own battle with poor health, Orwell continued his writing and completed the revision of 1984 in 1948. Orwell remarried in 1949 to Sonia Brownell, only a year before his own death of tuberculosis.

Orwell did not win any awards. The George Orwell Award, however, is named after him.Orwell may be known worldwide for his last two novels, Animal Farm and Nineteen Eighty-Four. But, for me, his best work is his essays. 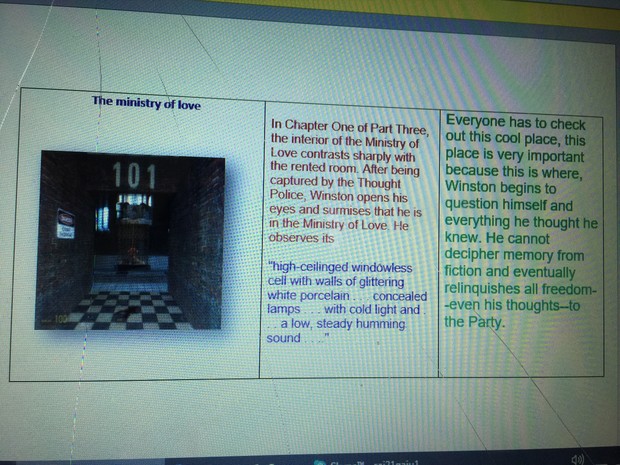 1984 is a book that changed our language, giving us such words and phrases as "thought police," "newspeak," "doublethink," and "Big Brother". Is it a warning about future horrors that may come if we fail to guard our freedom? Orwell's dystopia was in many ways an even darker version of Stalin's Soviet Union, with a godlike leader, a ruling party that enforces the state's ideology, and an omnipresent secret police. he Competitive Enterprise Institute, which opposes increased regulation, used the anniversary to put out a press release arguing that "the crusade for global governance led by environmental activist groups in the name of combating global warming" represents a 1984-style threat to personal freedom today. The oppressive machine in 1984 is a tyrannical state that maintains total control over the lives and even thoughts of its subjects and brutally crushes all dissent. It is unchecked power, "a boot stamping on a human face—forever." the book's definition of "doublethink," is "the power of holding two contradictory beliefs in one's mind simultaneously, and accepting both of them," the ability "to tell deliberate lies while genuinely believing in them, to forget any fact that has become inconvenient, and then, when it becomes necessary again, to draw it back from oblivion for just so long as it is needed, to deny the existence of objective reality and all the while to take account of the reality which one denies. Doublethink, newspeak, thought-policing and virtuous hatred are eternal temptations of the human soul, even in the freest of societies. We have met Big Brother, and he is us.

Neeha is using Smore newsletters to spread the word online.