The Glorification of War:

Why Do We Think It's a Game?

The Glorification of War:

Why Do We Think It's a Game?

Reality TV Rarely Reflects What Most of Us Would Call "Reality"...

...but NBC's program "Stars Earn Stripes" is arguably one of the most blatantly disrespectful misuse of the "reality televison" platform we have seen to date. The show, which only aired one season before being taken off the air, paired minor celebrities with U.S. military personnel. The military representatives--including Navy SEALs, Marines, and even a Green Beret--then endeavored to teach their celebrity partners about combat through simulated military trainings. What resulted was a twisted and warped picture of "war" as fun, amusing, and even desirable--neglecting to demonstrate the equally the harsh and unknowable realities that war brings. 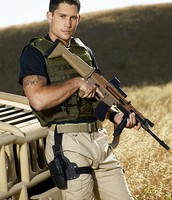 Talon Smith, one of the military participants in the show, poses with his gun and uniform, simultaneously glorifying and sexually objectifying war. 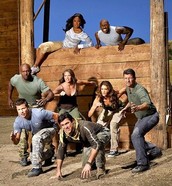 The celebrity cast of the show participated in numerous photo shoots designed to lead us to believe that they were actually learning about war and military life. 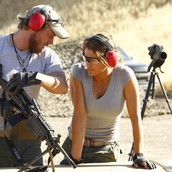 One of the military/celebrity teams focuses on learning how to shoot at targets.

Not long after this show was made public, an open letter signed by nine Nobel Peace Prize recipients from around the world was sent to NBC executives and producers of "Stars Earn Stripes" in 2012, denouncing the program's premise and condemning its production. Each reflecting on their own experiences with horrific and life-destroying war, these individuals included the following: 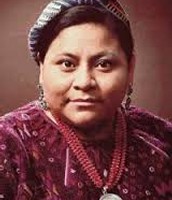 Menchú has worked to protect the rights of indigenous people in Guatemala both during and after the country's 36-year internal conflict. 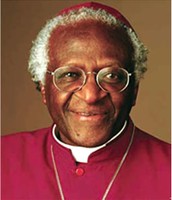 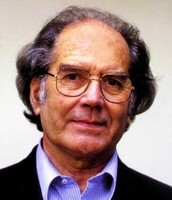 1980 Nobel Peace Prize recipient, Adolfo Pérez Esquivel worked to defend human rights and to speak out against military atrocities in Argentina's Dirty War of the 1970s.

Instead of "paying homage to the men and women who serve in the U.S. Armed Forces," as the show claimed to do, it glorified war and violence and belittled the trials of war and the sacrifices of military personnel. The good news is that, as previously mentioned, the show only ran one season before being pulled from the network; the bad news is that it happened at all. As the letter states bluntly, "Real war is down in the dirt deadly"--it is never entertaining, and preparing for it, as this show attempts to simulate, isn't either. The conception and production of this television program points to a deeper problem requiring our attention: how can we change our society's seemingly deeply-engrained notion of war as desirable and even, in some contexts, entertaining?