Shout is using Smore newsletters to spread the word online.

Get email updates from Shout:

I know a whale joke. It's a real killer.

I know a whale joke. It's a real killer. 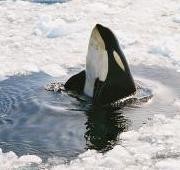 Orcas, or killer whales, are one of the world's most powerful predators. They mostly live in ocean and coastal waters worldwide and are the biggest of the dolphin family. The killer whale is a dominant hunter but gets its name from the amount of meat it eats rather than having an aggressive attitude. They hunt in pods, family groups of up to 40 individuals. Local pods tend to prefer fish, while fleeting pods marine mammals. They are protective of their young, and adolescent females often assist the mother in caring for them. They have a top speed of around 30 miles per hour but can travel 26 mph for long periods of time. They can grow anywhere between 23 to 32 feet. Killer whales today are considered to be an endangered species due to habitat loss and hunting from humans.

Here are some websites to learn more about killer whales

Shout is using Smore newsletters to spread the word online.