FAMILY : Herself, Mum, Dad and two older siblings,husband and 2 children.

SHE WAS A POLITICIAN

Aung San Suu Kyi is a politician she spent her early years in Burma and later as an adult spent a lot of time with her family in the United States Of America,England and India. Aung San Suu Kyi returned to Burma in 1988 after years living and studying overseas. On her return she witnessed the Burmese people being beaten and killed for protesting against the ruling of a brutal dictator. Her father was also a politician and was assassinated in 1947 so she only got to spend 2 years with him. Her mother was made ambassador of India in 1960.

Even though ASSK was under house arrest because she was expressing that people should be able to have their own speech and lots of other bad things were happening she still fought for her country.

No matter what happened ASSK would still be there like a life saver for her country.

AUNG SAN SUU KYI was born to be a leader.

How has she enhanced democratic rights

In 1988 Aung San Suu Kyi became major leader of the movement towards the reestablishment of democracy in Burma ( Myanmar). In 1991, while under house arrest by the government for her activities, she was awarded the Nobel Peace Price. The Nobel peace Price is something that changes the world in a positive way. After 15 years under house arrest she was released on Saturday the 13th of November. ASSK Burmas pro democracy leader and Nobel Peace Prize winner has come to symbolise the struggle for freedom of the Burmese people.

Do you think that Aung San Suu Kyi should be the leader of Burma? Why or Why not? Put your hand up 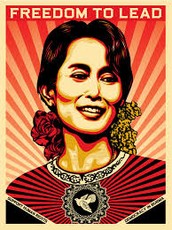