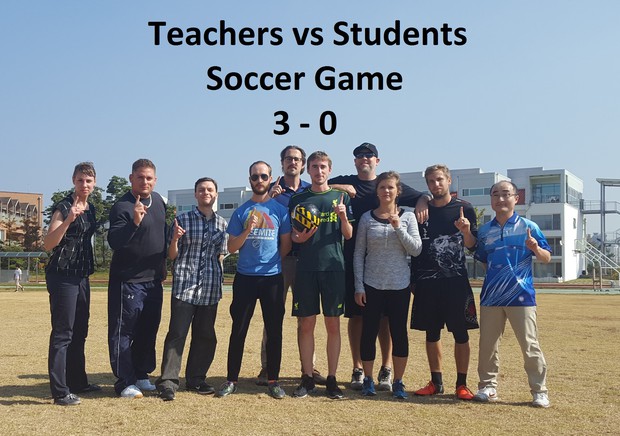 Term 2 has begun and Term 1 grades should now be current in PowerSchool for all middle school classes.

Students at CDS have been very active this week and are settling nicely into Term 2. Our Student Council members continue to busily prepare for the annual CDS Middle School Halloween Party. As you may know, this is the biggest student led event of the school year and we're very excited. Students will be allowed to wear costumes to school on October 31st, but should not wear face paint or masks until the party begins at 4:00pm. Please refer to the dress code policy in the MS Handbook for more information. The Halloween party will end at 9:00pm sharp.

I want to remind you all that Parent Teacher Conferences will be held next Friday, November 3rd. You can find details about this below, as well as other exciting middle school news and events further within the newsletter.

In closing, our Boys Soccer team will finish their season this Saturday, October 28th with the All Star Soccer Tournament at YISS. Our Badminton team will compete on the same day at Chadwick. I'm sure they'd love to see people from our community show up to cheer them on.

On Friday, November 3rd we will hold our first Parent Teacher Conference of the school year. The times available will vary for each teacher, but in general, the Middle School Conference will take place from 9am - 4pm (lunch break from 12-1).

On this day, we encourage you to visit your child's teachers to discuss your child's progress thus far. You may make reservations with up to 3 teachers.

To reserve a time with a teacher, please click on the button below. You will be taken to the Middle School website where you can click on teachers' names and complete the required information. Sign-ups will close on Wednesday, November 1st, at 9:00am.

* If for any reason, you have trouble booking an appointment, please contact the MS Office so we can help.

Teachers will meet with you in their classrooms unless stated otherwise on the booking form. If you have any questions or concerns, feel free to contact the MS Office for more information. We look forward to meeting with you on November 3rd. ​​​

On Thursday, Mr. Harris challenged all students in Morning House to see how long they could squat against the wall.

We want to thank everyone who showed up to learn more about how to support digital citizenship at home. We hope you found it interesting and helpful!

Liz and Woojin win Term 1 MVP Award! Team Phoenix is in the lead.

CDS is Participating in the Cheongna Beauty Festival this Saturday

CDS has been invited to participate in this year's Cheongna Beauty Festival. The event will take place tomorrow ---Saturday, October 28th along the Cheongna Canal in the park area behind the the Post Office. We will have a booth at the festival from 11:00am to 6:30pm.

Several of our middle school students have kindly agreed to perform at the event. Mr. Harris will also be playing his bagpipes.

We hope you can drop by to say hello and watch our students perform!

Earlier this week we sent your children home with their MAP Progress reports and Term 1 grades were finalized. I encourage you take some time this weekend to speak with your child about their academic growth.

Conversation about grades and MAP scores will be most effective if the focus is centered on progress rather than achievement. "Why do you think your growth in reading has dropped since Fall last year?" is a much more helpful question than "Why are your reading scores so low/ or lower than average?"

At CDS MS, we strive to create a culture where students value personal growth more than achieving the highest letter grade or RIT score. We know that for students to reach their potential, they need to have confidence and take risks with their learning.

If the focus on grades and achievement is too great, students are less likely to engage in challenging work because they're afraid they will fail. This applies to both high achieving and struggling learners.

It is my hope that we can work together as a school and parent community to share helpful messages with our students that encourage confidence and support growth.

If you would like to better understand the MAP Growth assessments, please click here for information in Korean, English, Spanish, and Chinese.

On Tuesday we held our Term 2 Assembly. We began with a slideshow featuring some of the best moments from Term 1. Next we enjoyed a message from Principal Shim on empathy and compassion. Mr. Harris and Ms. Van Liew delivered a hilarious "minute-to-win-it" activity called "Cookie Face." Later a group of students from 7B were brave enough to perform a "dance for change" which they choreographed themselves. We ended the assembly with AR Awards and sharing the Term 1 Dalton Cup point tally along with Best Sportsmanship award and MVPs. The assembly finished with an overview of what we can look forward to in Term 2.

Take a look at the slideshows and videos below for details and highlights. 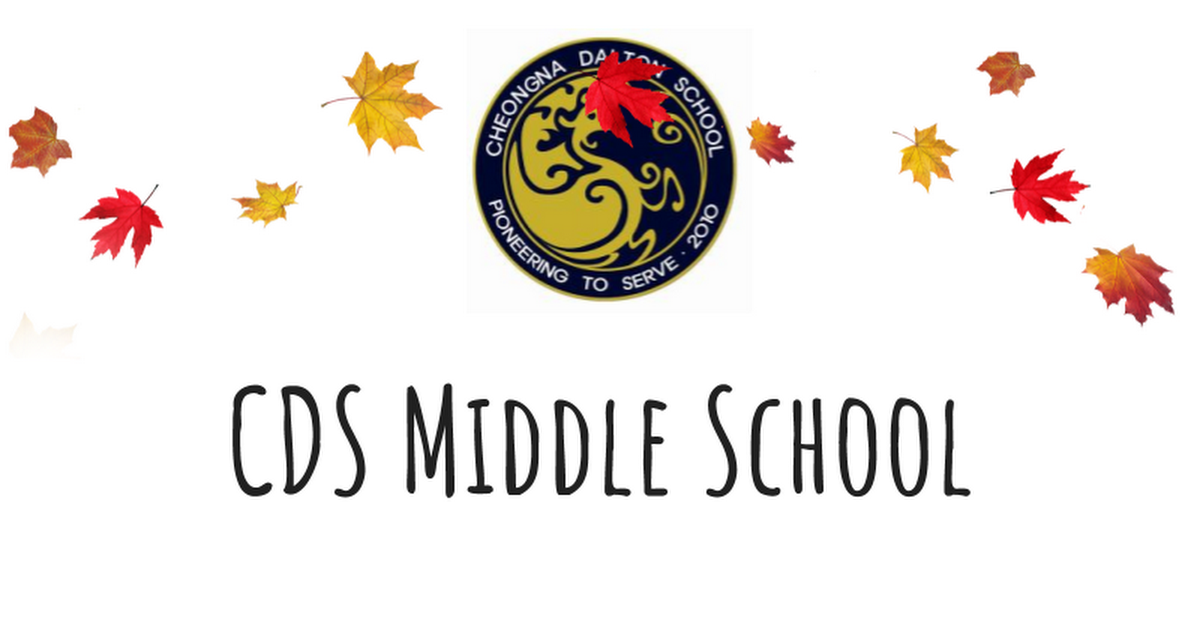 We are very excited to announce that Mo Gawdat will visit CDS on Monday, October 30th.

Mo Gawdat is an engineer, speaker, author, and former Chief Business Officer at Google [X]. Despite overwhelming financial success at a young age, Mo found himself profoundly unhappy. He decided to apply his engineering brain to overcoming his sadness and solving the persistent question of how to be truly happy.

We have invited our 7th & 8th grade students join the high school for an afternoon assembly to hear Mr. Gawdat speak. 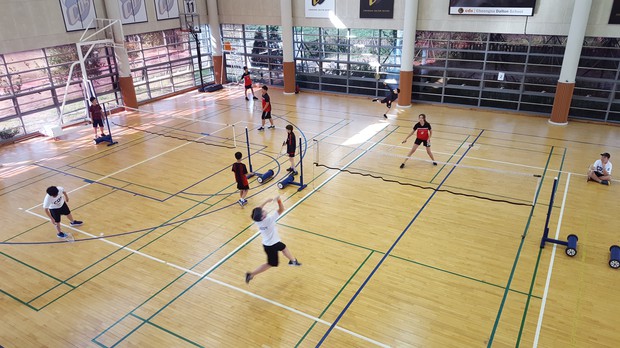 This past Saturday the CDS middle school badminton team hosted the Seoul Foreign School (SFS) and Chadwick International (CI) badminton teams for the second jamboree of the season. Unlike the first jamboree at SFS, this one featured singles badminton as well as doubles badminton, and included both round robin play and single/double-elimination tournament play.

The day started off with both upper and lower division singles badminton players competing in round robin play and then in a final single-elimination tournament. CDS did extremely well in the upper division singles tournament by having six of the top eight players in the quarterfinals. Joon Hwang of CDS (6th grade) achieved a decisive victory over Victor Shin of CDS (7th grade) in the upper division single-elimination tournament finals to take first place overall in singles play. CDS also had four players in the lower division make it to the quarterfinals, but unfortunately, after battling through many long, difficult matches, there were no top 3 finishers.

The day ended with a double-elimination doubles badminton tournament for each of the upper and lower divisions. In the lower division, CDS had two doubles teams perform very well: Alex Kim and Jeewoo Lee placed third overall and Kevin Park and Joohyuk Lee finished in second. Hyungmin Song and Jaehong Park made it to the semifinals in the upper division, finishing fourth overall.

Mr.Monette and Mr.Cavasin agree that all students played well throughout the day and have shown great improvement from the start of the season! Also, both coaches would like to thank all of the parents who came out to support the team, especially those parents who helped provide food and beverages for not only the CDS badminton team, but the SFS and CI badminton teams respectively. We couldn’t have done it without you! 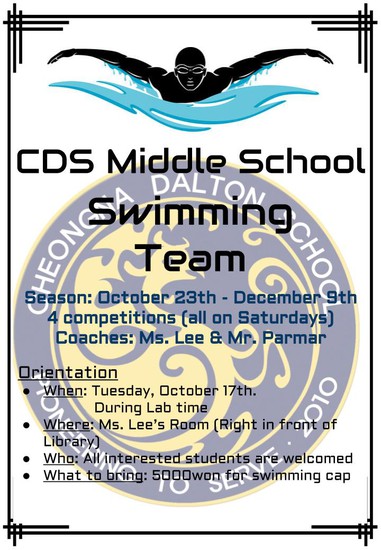 We are excited to have a Swimming Team again this year at CDS Middle School! Ms. Lee and Mr. Parmar are happy to be coaching the team together for our second year. Team members are listed below. They will be practicing on Monday and Wednesday after school and their first competition will be at Seoul International School on November 4th!