On 12/9, the entire 610 Henry Community turned out to cheer on our seniors, lining the perimeter of our building, waving posters and pom-poms, congratulating our seniors for having applied to college! 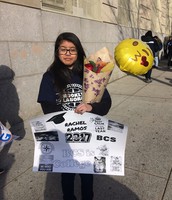 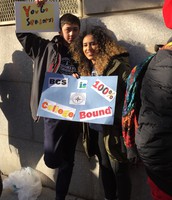 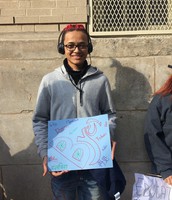 Marching through Carroll Gardens to the Red Hook Post Office!

After marching through the school's perimeter, seniors marched through Carroll Gardens (applauded by local residents and business owners) to the Red Hook Post Office with an escort from the 76th Pct. Seniors mailed a letter symbolizing their college bound journey (including scholarship/college applications, thank you notes, financial aid information, etc.), all stamped with a special 2016 College March seal specially developed by the US Postal Service. There was a lot of fanfare at the Post Office! Students then marched back through the community to the gym where we had an afternoon of food and dancing to honor the Class of 2017! What a celebration for our entire Brooklyn Collaborative community!

Extra Special Thanks to our Brooklyn Collaborative Supporters! Here is a short list of the VIPs we hosted during our College March! 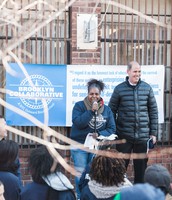 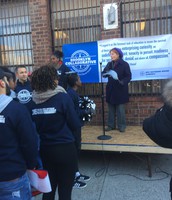 A Full Morning of Festivities beginning with our Pep Rally!

The morning began with our pep rally. Grades 6, 9, and 11 packed our auditorium with Masters of Ceremonies Taron and Tracey. Taron energized the audience with a series of call and responses and cheers! The Brooklyn Collaborative Cheer Team then pumped up the audience with some dynamic routines. We enjoyed speeches from Zac Martin, a community activist in Brooklyn whose passion is supporting communities to move towards reconciliation through collaboration. Crew representatives also gave speeches - shouting out their highlights at BCS and honoring the bonds within their crews. Kudos to Tamara, Israel, Mia, Ayam, Arianna, Fredy, Taniea, and Godwin for being nominated by their Crews for this honor. As Tamara said in her speech, "Crew has prepared us well. It has prepared us to get ready for the real world and the obstacles that we will face. Being college bound ready means that you are opening a new door to the next chapter of your life. This means stepping into the adult world and creating your image. With the support we have experienced in crew, we have developed the confidence to create ourselves."

An even earlier morning for our College Ambassadors!

Brooklyn Collaborative was honored for the second year in a row with extensive press coverage from NY1. We welcomed correspondent Roger Clark starting at 6:30AM! Shout out to Andrea, Janaya, Jovani who arrived at BCS before the sun rose for their interviews on the live 7am show on NY1. Yordi and Tamara then arrived at 7:30am for their portion on the live 8am show on NY1. Thanks to our College Counselor Karlette and our NYC Outward Bound Schools School Designer Aurora for prepping our College Ambassadors to be ultra media ready! For a special segment on NY1 Noticias en Espanol, Brooklyn Collaborative alumnus Guadalupe (Lupe) Muller was interviewed. Lupe Muller was a graduate of the Brooklyn Collaborative Class of 2014. She began her undergraduate studies at Guttman Community College and has successfully transitioned to the City University of New York at Queens College. During her tenure at Guttman, she was an active member of the college community. She served as President of the Student Government Association and interned at CUNY Citizenship Now - which provides immigration law services for people to seeking to become U.S. citizens. Guadalupe was a member of the CUNY DREAMers subway campaign and was highlighted in the New York Daily News. We are so proud of Lupe! We have the highest expectation for all our students and graduates to engage in civic life and to exemplify our core values well beyond BCS, just like Lupe! 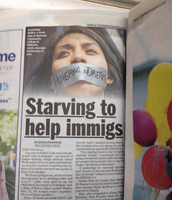 Please check out and share our news story on NY1 News: http://www.ny1.com/nyc/all-boroughs/news/2016/12/9/students-end-college-march-with-postmarked-college-applications.html 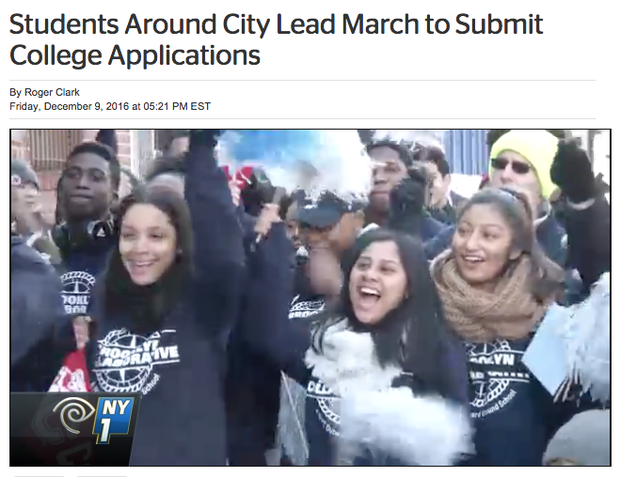 What happens leading up to the College March?

The College March is a schoolwide event! Leading up to College March, we have College Awareness Week, a series of lessons done in Crews in Grades 6-11, developed by our Brooklyn Collaborative Crew-to-College Committee (supported by CARA, the College Access: Research & Action (CARA) program in partnership with the CUNY Graduate Center). Students engage in college lingo activities, college trivia games, college bound Q&As, and much more. Underclassmen (students in Grades 6-11, including Brooklyn New School 5th graders) also interview seniors and write letters to them, personalizing the college bound experience, hearing first hand from seniors about their journey and hopes and dreams. From these interviews, underclassmen also made posters specific to their senior, dotting the sea of supporters with love for each of the members of our Class of 2017! 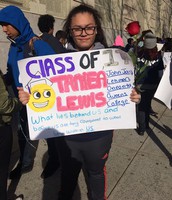 How can I find out more about the College March?

The College March is in its 6th year. Annually, on the second Friday in December, college seniors from across the country march their college applications out the front doors of their schools to their local post office or mail truck. Members of their school communities, family members, local business leaders, elected officials, and other supporters turn out to cheer them on. This year, over 2,700 high school seniors from 35 schools in 12 cities across the country marched. More than 1,400 of the seniors from 18 schools marched in New York City, including all the NYC Outward Bound Schools. Find out more information at collegemarch.org.

So proud of the BCS Class of 2017 and their Crew Leaders!

We are so proud of the 92 members of the BCS Class of 2017 and their Crew Leaders! Please stay tuned for updates about their college outcomes and acceptances from College Counselor Karlette. 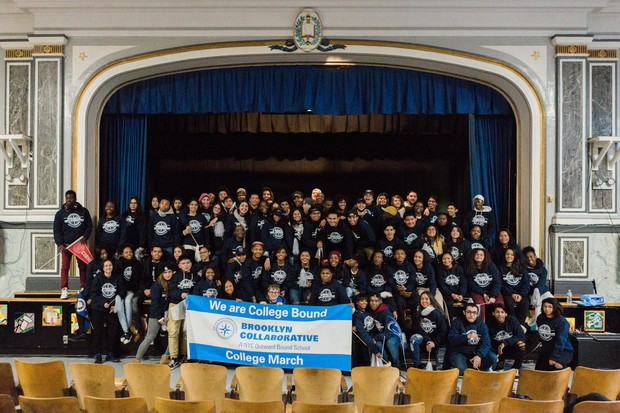 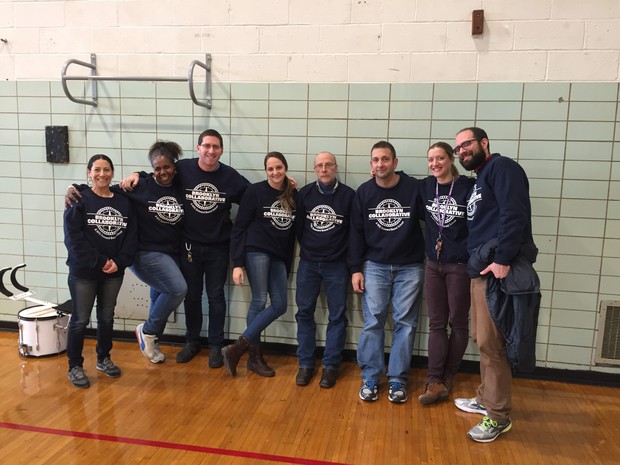