Mable is using Smore newsletters to spread the word online.

Get email updates from Mable: 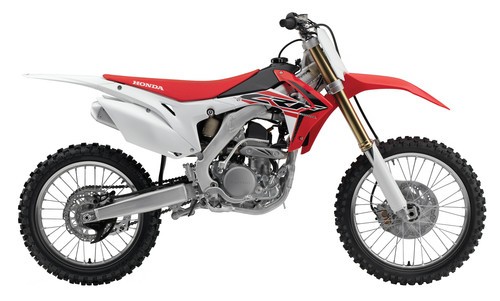 It’s no secret that the Honda CRF250R is one of the best handling motocross bikes in the class. With the addition of its new Showa® Air Fork SFF suspension and plenty of other fine-tuning changes, the CRF250R performs better than ever. One ride will prove it. New features in the 2015 model include the Engine Mode Select button, an industry first for MX bikes that makes tuning for track conditions a quick snap. You’ll also notice other big changes including a larger front brake disc, a lighter throttle return spring and larger muffler exit-pipe diameter.

Within the heart of the CRF250R beats the heart of a racing champion. The heart of any great motocross bike is the engine, and no one designs them better than Honda. The CRF250R’s 249cc Unicam engine is tuned to work with the dual exhaust to enable more low-end horsepower and more free rev up top. With its high-compression head, relocated exhaust power and Dual Injector fuel-injection timing, it’s the most useable engine in the class. The off-road motorcycle’s new twin-spar aluminum chassis features lower frame spars that lower the center of gravity and improve its center of mass. As a result, the CRF250R is both responsive and stable.

With its motocross bikes, Honda has built its reputation on racing, right from the beginning. And Honda motorcycles have won just about every racing championship. So, you know the CRF250R is already a winner. With updates in the 2015 version, Honda just made the best even better. All new blacked-out accents, including new blackened radiator fin guards, rear disk guard and brake line guides look sharp and help make the dirt bike race ready. Plus, the new wave-rotor shape of the CRF250R’s rear disc trims weight and collects less debris. New Dunlop MX52 front and rear tires offer superior feedback and traction – a perfect complement to the off-road motorcycle’s new suspension.

Mable is using Smore newsletters to spread the word online.