The Boy Who Harnessed The Wind

The Childhood of William Kamkwamba

The Boy Who Harnessed The Wind

The Childhood of William Kamkwamba

The Boy Who Harnessed The Wind is about a boy named William Kamkwamba growing up in Malawi. He grew up with many sisters, him being the second oldest. With a lot of people in their family, and being in a poor country, everyone suffered from hunger and drought. William grew up a very curious boy and he wanted to fix this problem with a solution. He always wondered how technology worked and wasn't afraid to ask questions. He and his friend started a tiny radio repair business when they were kids with nothing to do. It wasn't exactly a "business', but they had a little something going. Once, William Kamkwamba opened an old science textbook about windmills. Through these very rough times his village was facing, William wanted to help out. His neighbors in his village called him crazy that he thought he could build such machinery to help the people around him. In such devastating times, how could he find such money and equipment to do such things? William wanted to attend boarding school, but quickly into the year his monthly payment could not be made during these rough times. Once he dropped out, he then helped his father farm and collect as much food as possible. Almost all people were growing hungry and dying of starvation. William Kamkwamba still wanted to fulfill his hope of making electricity and running water. He would stop at nothing even when he had the scrappiest materials to work with. Because of these materials, of course his windmill wasn't going to look amazing. All William had were old, ruined science textbooks as his guide, determination, and a touch of spirit. Mr. Kamkwamba made it happen! He made a windmill that powered four lights and a water pump that never let him down each season. The unpredictable kid became the inspiring young man for hundreds. 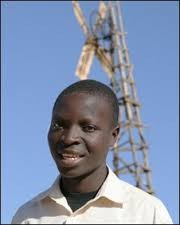 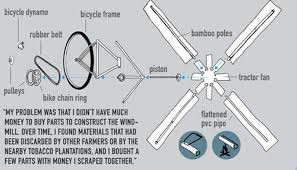