Teams- The teams are made up from 6 players with a minimum of 2 females in league matches. Each substitute may only enter the game during time outs or in case of an injury.

The Court- The game may be played indoors or outdoors. The pitch is divided into two sides separated by a ‘neutral’ no-man’s-land type area in the center. Pitch dimensions depend on the venue but range from as large as 20m x 10m down to 14m x 7m. Players must remain within the pitch boundaries at all times unless they are out. They are not allowed to go and fetch the balls from outside of the pitch – there will be ballboys/ballgirls to do this. Players must throw from behind the neutral area, although they may follow through into this area after throwing the ball from behind it. Players may enter the neutral zone to collect a ball during the set; they must do this at their own risk. 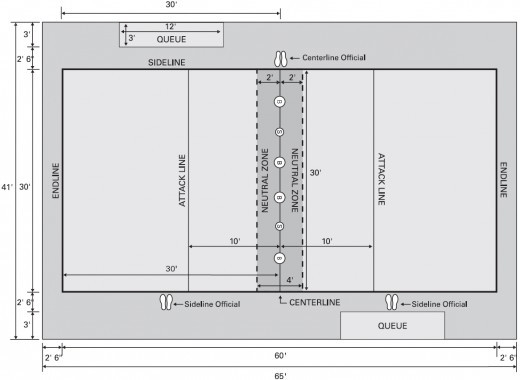 Equipment- During the game there are 6 balls which can be used, 4 larger balls and 2 smaller ones (the smaller balls are only available to throw for the female members of the team, females can also throw the larger balls).

Headshots- Players have to be hit at shoulder height or below to be out. If a male player hits a female player in the face, he is sent to the back of the ‘out’ line.

Matches- Each match lasts for a pre-defined amount of sets (usually the best of 3), each set lasts for around 2 and a half minutes. Once the time is up the team with the most players remaining on the court wins the set; if it is equal the team to get the next player out wins the set in a sudden death style game (if all players are eliminated from a team the set is also won). If a game comes to 1v1 then the court may be shortened; if a team has more players left than the other they cannot hold onto the balls to time waste time. The referee can stop the watch at any time during the game until the balls are thrown if he thinks time wasting is happening. You can only keep hold of the ball for 5 seconds, this stops time wasting and creates a high tempo match.

The Rush- Each team will stand behind the backline and the balls are placed along the centre of the pitch. Once the referee’s whistle has been blown players must rush to get the balls, picking up as many as they like. Once you have a ball you must then return that ball to the baseline before it is in play (you can’t just pick up the ball and throw it). You can return the ball back by running with it or throwing it back to players that have waited there, no use of feet contacting the ball or sliding is allowed when doing this.

A players is deemed as out when:

• A LIVE ball hits their body (shoulders or below) or their clothing and then hits the floor or a wall.

• An opposition player catches a LIVE ball. If your opponent catches your throw then you are out and one of their team comes back in. A double swing, if you catch it then it is your job to call in your teammate who is first in the line. The referee will not necessarily do this for you. If you are caught you must leave the pitch straight away.

• Once you are out, you must leave the pitch immediately and join the queue of players already eliminated from your team OUTSIDE and BEHIND the pitch area. If someone on your team catches a throw and you are first in the queue, you go back in via the baseline.

Live Ball- A “LIVE” ball is one that has not bounced or already hit a wall/ceiling (unless local rules deem otherwise). Any ball that has bounced does not count, and play continues as normal. It’s like cricket/rounders – until the ball hits the floor you can still catch someone out. If you are hit with the ball but one of your team-mates catches it before it touches the ground, then the thrower is out. However if the ball touches you and other players then bounces, you are all out! If you parry the ball onto the wall or ceiling you are out even if you catch it on the rebound

Blocking- A player can block a throw with a ball they are holding, with play continuing as normal, as long as the ball they are holding isn’t knocked out of their hand. That doesn’t count as a block and they are out. A player can parry the ball away with their ball, and if they or a team-mate catches it before it bounces then the thrower is out. If it hits the blocker’s hand(s) holding the ball they are blocking with, that is not out. Once it hits the ball you are holding, or the hand holding it, you and your teammates are safe for that play, and only the thrower can potentially be out. Male players are out if they block with the smaller balls. If they have caught a smaller ball then must then put it down or give to a female team-mate straight away.

Out of Bounds- Players must stay inside the pitch dimensions at all times unless they are out, when they must line-up appropriately. If you catch a ball and momentum takes you fully out of the pitch area then you are out. As long as you keep part of one foot on the floor and inside the pitch then the catch counts. The referee will give the benefit of the doubt to the person catching the ball as we want to encourage catching. If you momentarily go outside the baseline but are not dodging a throw in the process you will not be out as long as you come straight back into the pitch. If however this is a regular occurrence the referee has the right to warn you and then call you out. If you leave the pitch area in the act of dodging a throw you are immediately out. If the game has reached the shortened pitch stage, you must stay within the baseline at all times – there is no leeway.
Yellow Cards-

A YELLOW CARD is given for the following reasons:
- Jumping the queue when a catch is taken
- A male player hitting a female player in the head with a throw, unless the female player has ducked into it or was already on the floor.
- At the referee’s discretion for language, persistent foul play, dissent or unsporting play.
- Blatant Cheating where a player is caught or hit, and obviously knows it, and tries to stay in. Or when a player comes back into play knowing they should not be in play
The player shall join the back of the queue but can come in again as per normal with a catch.

A RED CARD is given for the following reasons:
- Foul & Abusive Language directly at a referee or another player
- Any kind of threatening behavior towards a player, official or spectator at any point in during the event.
- or at the referee’s discretion.
The player is out of that whole match (with no replacement allowed) and potentially suspended for more matches. 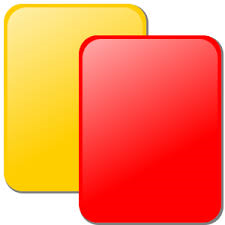 The first situation which happened in the game of dodge ball was someone crossing the line when running to the centre at the start of the game to collect the balls. This was an incident as if you are to cross the line when collecting the ball you are automatically out because it is a designated area which no part of your body can enter.

The second situation which happened in the game was someone not having their foot touching the bench at the start of the game. If this is to happen in the game you are automatically out because you are seen to have an advantage when collecting the balls at the beginning of the game.

The third situation which happened in the game was someone not making a valid attempt to throw the ball at someone. You can be given out for doing this as it can be seen as time wasting and also aggravating the opponents.