Jacqueline is using Smore newsletters to spread the word online.

Get email updates from Jacqueline:

By Jason Souvaliotis and Jacqueline Ma

By Jason Souvaliotis and Jacqueline Ma

As the United States expanded across the North American continent, the debate over slavery resumed with the question of slavery's expansion. Americans took differing viewpoints on the issue of slavery: slave-holders in the South considered slavery a vital institution, while abolitionists in the North demanded the eradication of slavery. Throughout the 1800s, multiple events increased the debate over slavery and increased divisions between proslavery and antislavery Americans, eventually leading to the Civil War in 1861. Between 1840 and the start of the Civil War in 1861, the 1846-1848 War with Mexico was not the point of no return for the Civil War because the resulting discussions of slavery focused on compromise, not war and secession. Ultimately, the Bleeding Kansas crisis of the late 1850s marked the point of no return for the Civil War. The Bleeding Kansas crisis marked the point of no return because it introduced active violence between Americans over slavery, sparking the Civil War.

The Bleeding Kansas crisis marked the point of no return for the Civil War, because it initiated the first major events of violence over slavery. 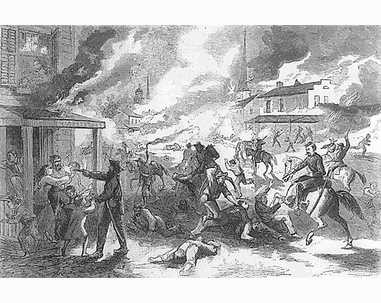 A visual from the Harper’s Weekly magazine widely distributed throughout the North shows the destruction of the town of Lawrence, Kansas, by a proslavery force on August 12, 1863. This massacre in the early Civil War resulted as a consequence of the violence from the Bleeding Kansas period.
http://callisto.ggsrv.com/imgsrv/FastFetch/UBER2/CWPIC002

In Kansas, settlers were faced with the task of deciding Kansas’ status as either a slave state or free state. Although the majority of settlers were antislavery, President Pierce accepted the legitimacy of a proslavery legislature elected with the aid of Missourians who had crossed into Kansas to vote for slavery. The antislavery residents refused allegiance to the Lecompton legislature, and both sides turned to violence in 1855, starting a guerilla war that took almost 200 lives. What Horace Greeley of the New York Tribune called the “Bleeding Kansas” crisis had begun.

“I, John Brown, am now quite certain that the crimes of this guilty land will never be purged away but with blood. I had, as I now think vainly, flattered myself that without very much bloodshed it might be done.”

- John Brown in Charleston, Virginia, right before his execution on December 2, 1859

John Brown, an abolitionist from New York and Ohio, commanded a free-state militia during the Bleeding Kansas period. After the proslavery force’s attack on the free-soil town of Lawrence that started the Bleeding Kansas crisis, Brown quickly welcomed the budding violence of the period, believing that the issue of slavery could only be solved with active fighting, not compromise. He continued this aggressiveness with his murder of proslavery settlers at Pottawatomie in Franklin County, Kansas. Brown displays the emerging belief of many Americans in the Bleeding Kansas crisis, that the debate over slavery could only be solved with violence and ultimately war.

The accounts of other settlers

Edward P. Bridgman, a settler in Kansas at this time, recounted the massacre at Pottawatomie Creek, stating that while the murdered men had insulted and threatened Brown’s anti-slavery group, Brown had retaliated in a “barbarous and inhuman” way. Brown’s actions show the beginning of the cycle of violence in Kansas, where looting, robbery, and other barbarous acts were commonplace. In fact, Bridgman asks his cousin in this letter to send him a Sharps rifle so he can protect himself. Bridgman’s letter displays how the violence in Kansas harmed everyone involved, pushing all Americans to violence in the debate over slavery.

The violence even affected pacifist Quakers because of their anti-slavery leanings. The Quaker settlers of Kansas believed that they could contribute to the foundation of an anti-slavery government through good works and votes. But Quakers were still in harm’s way, as some had their horses and cattle stolen by pro-slavery militiamen and others were almost beaten to death for working as election officials.

The Mexican-American War was not the point of no return for the American Civil War because it did not lead to active violence between the states over the issue of slavery. 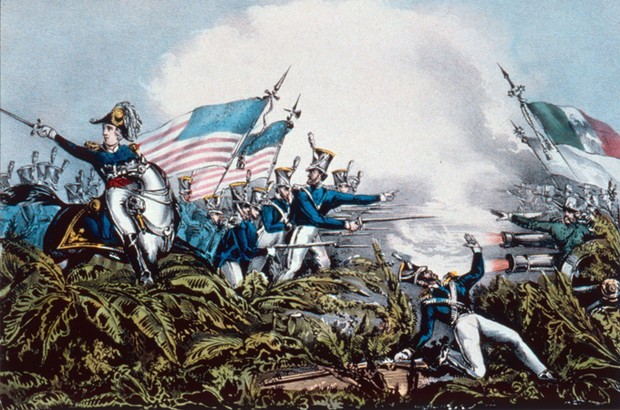 General Zachary Taylor leading united American forces against the Mexican army at the Battle of Palo Alto, the first major battle of the war, on May 8, 1846.

As a result of the Mexican-American War, the United States received a large land concession from Mexico. However, Americans disagreed on whether or not to expand slavery to this Mexican Cession. The issues over slavery expansion raised by the war were no different than the issues raised by the Louisiana purchase and the westward expansion of the early 1800s. In that previous round of westward expansion, the issue of slavery was resolved peacefully with debate between Americans, resulting in the 1820 Missouri Compromise. Thus, the new territory gained during the Mexican-American war was no different: more land, more compromises. Congress discussed and debated the expansion of slavery, leading to the defeated Wilmot Proviso and the successful Compromise of 1850 that appeased both sides of the slavery debate, maintaining the balance of power between proslavery and antislavery Americans established in the Missouri Compromise.

In David Wilmot’s defense of his proviso, he emphasized this cooperation between the states, stating that “Texas is the primary cause of this war… we are fighting this war cheerfully, not reluctantly — cheerfully fighting this war for Texas; and yet we seek not to change the character of her institutions. Slavery is there: there let it remain.” While Wilmot’s Proviso sought to limit the expansion of slavery, he cheerfully supported slavery in its existing form. As shown, Wilmot had no intention of violently fighting opposing proslavery forces and instead focused on compromise. Additionally, Wilmot said that when his proviso passed the House, there was “no cry that the Union was to be severed in consequence [and] the South, like brave men defeated, bowed to the voice and judgment of the nation.” Wilmot’s speech exemplified the spirit of cooperation and discussion prevalent during the Mexican-American War over the slavery issue.

This desire of a compromise and union between the nation stands in stark contrast with the antagonistic violence between proslavery and antislavery settlers in Kansas, who refused to recognize the constitutions and governments formed by the opposing side and advocated fighting rather than compromise.

Image links below their respective images.

Jacqueline is using Smore newsletters to spread the word online.