T. rex and the Crater of Doom

T. rex and the Crater of Doom

This book is based around the work of Walter Alvarez the author of the book, as he works to prove the theory that 65 million years ago the dinosaurs were wiped out by an asteroid or meteor the size of mount Everest. They travel to remote parts of the world to look for new evidence supporting this theory. Although it is already widely accepted for the most part there was not any solid proof that it actually occurred and the details of it if it actually did. Walter and a group of geologists follow this quest all across the world looking at new and old evidence trying to piece everything together to build proof that this giant asteroid or meteor actually struck the Earth and wiped out all the dinosaurs. 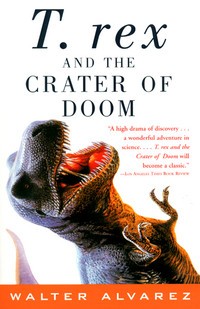 Dinosaurs have always fascinated me and although i'm not too thrilled they were wiped from existence it was still interesting to find out how they were. Before this book I just thought a big meteor hit the Earth and killed everything instantly. Now I know that it was actually a giant ball of ice and most of the dinosaurs weren't killed from the initial impact but from the dust cloud that covered the Earth after. I also was worried that it would be a boring book just reading science facts over and over but it was actually very exciting and fun to read. I found myself really following their journey like I was actually there. To think they stood in the same place where a giant ball of ice the size of Mt. Everest hit the Earth blows my mind. They provided facts and information in a easy to understand way that also made it seem more exciting. Just the overall way he turned this book into a sort of adventure novel really appealed to me.

This book has many relateable factors to this class well because it changed the course of the Earth forever and wouldn't be the same if it never took place. This class is majorly about studying the Earth so obviously there's a big connection there but more specifically rocks play a big role in this book and helping Alvarez look into the past. “Rocks remember the past” (Alvarez 20). The rocks they found at certain locations help evidence inside of them that pointed toward the theory they were working to prove. The evidence was actually inside the rocks as they contained particles and minerals for millions and millions of years ago. The rocks are almost like a rough jagged textbook.
“Rocks are the key to Earth’s history” (Alvarez 17)
Pictured below is the piece of clay, held by Walter Alvarez, that sparked research into the impact theory. The greenish-brown band in the center is extremely rich in iridium. They hypothesized that the iridium was spread into the atmosphere when the asteroid was vaporized and settled across the Earth's surface amongst other material thrown up by the impact, producing the layer of iridium-enriched clay. Seeing as how we are actually currently talking about rocks and minerals it helped me realize how truly important rocks are what a crucial part of the Earth they are.