Get email updates from Jolee:

Reading from the Marshall Memo

Links for Feeder Use: 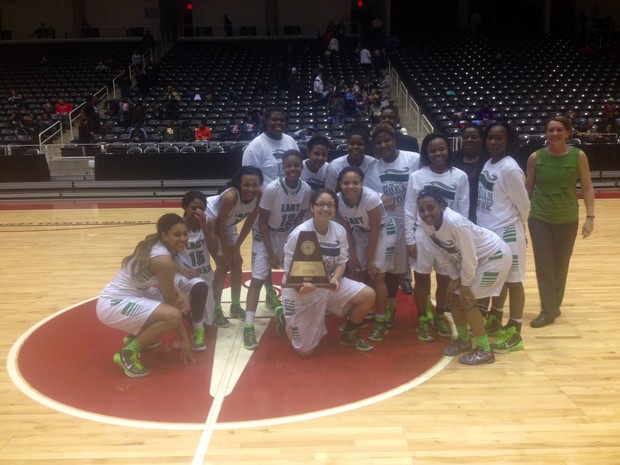 The Bryan Adams Girls basketball team is headed to the the UIL State Championships. The Cougars, under the direction of Head Coach Darren Eubanks, defeated Arlington Sequin 64-60 in the Regional Final at Garland's Curtis Culwell Center. The Lady Cougars fought hard throughout the game and won.

The Cougars advanced to the State Tourney and will play Cedar Park Vista Ridge, Thursday, March 5th at 8:30pm.

www.dallasnews.com
GARLAND — Bryan Adams powered its way to the Class 5A Region II girls basketball title Sunday, surviving a late rally by Arlington Seguin to claim a 64-60 victory and a spot in the state tournament. 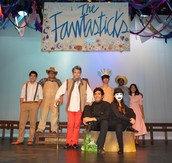 We are re-scheduling the public performances of The Yellow Boat, our U.I.L. One Act Play, for March 19th, March 20th & March 21st. Show starts at 7PM in the B.A. Auditorium. Tickets are $3-$5 and will be sold at the door.

The story of The Yellow Boat is a glorious affirmation of a child's life and the strength and courage of all children. This dramatization is based on the true story of David and Sonja Saar's son, Benjamin, who was born with congenital hemophilia and died in 1987 at the age of 8 of AIDS-related complications. A uniquely gifted visual artist, Benjamin's buoyant imagination transformed his physical and emotional pain into a blaze of colors and shapes in his fanciful drawings and paintings. A Scandinavian folksong tells of three little boats: "One was blue, one was red and one was yellow as the sun. They sailed far out to sea. The blue one returned to the harbor. The red one sailed home, too. But the yellow boat sailed up to the sun." Benjamin always concluded his bedtime ritual by saying, "Mom, you can be the red boat or the blue boat, but I am the yellow boat." Benjamin's remarkable voyage continues to touch audiences around the world.

Hill Hoops for the Heart Campaign

Congratulations to Hill students and faculty for contributing to a successful Hoops for Heart campaign. The total amount raised through donations, as of February 27 is $1,876.00. Thanks to our all of our campus wide participants!

Maria E. Rodriguez, Librarian/Media Specialist at Robert T. Hill Middle School, has been nominated for Big D Reads' Dallas Librarian of the Year award! Librarians play an incredibly important role in our community. Thank you for being a wonderful librarian in Dallas. We appreciate you!

Larry Smith Elementary was ranked 14th out of the top 20 schools in the District that passed over 55, 000 lessons collectively in Think Through Math. “In a comprehensive study by the Texas Education Agency (TEA) evaluating computerized interactive programs that are part of the state’s Students Using Curriculum to Ensure Sustained Success (SUCCESS) program, Think Through Math (TTM), a web-based math instructional system for grades 3 through Algebra 1, has been found to significantly improve STAAR performance outcomes for students. According to a recent report when students pass 30+ lessons in TTM, measureable gains can been seen in the classroom and on state test.”

Read the full story by going to www.texassuccess.org or for more information regarding the Texas Success Initiative.

Thanks to our awesome BA faculty members all over the feeder for making Friday fun by celebrating reading and honoring Dr. Seuss! Good to see the excitement and fun. Thanks to Dr. Elmore and Larry Smith Elem for sending some great photos our way!

Special thanks to our Bryan Adams High School ROTC students who read to students at Kiest Elementary. One student dressed as Clifford, they also had visits from Cat in the Hat, and Thing One and Thing Two. Shout out to Librarian Marroquin and the Kiest faculty for participating.

For Teachers from Bayles, Kiest, Reinhardt, Smith and Sanger
Get Directions

For Teachers from Casa View, Gill, Hexter and Reilly
Get Directions

The Ed Fellows Program in collaboration with TFA- DFW is currently accepting applications. I’m specifically reaching out because we value our partnership with Dallas ISD and need your support to source quality nominations.

Our leadership program is designed to develop teacher leaders who can implement proven practices in their own classrooms with fidelity and influence colleagues to drive and sustain student achievement on their campus. We believe the actionable leadership strategies our program teaches can support the work your principals lead on their campus.

Please encourage your principals to nominate high achieving teachers today. We are in search of educators eager to practice their skills to grow, learn and elevate their impact. Teachers interested in learning more should register and attend our Cocktails and Conversation on March 4. The application deadline is March 31.

From the Marshall Memo #575

In this Journal of Staff Development article, Boston Public Schools educators Sara Zrike and Christine Connolly describe making a series of 20-minute visits to math classrooms in a K-8 school and noticing that teachers’ questions were often not engaging students in higher-level thinking. They also noticed that teachers were talking more than students, questions and answers happened in ping-pong fashion between teachers and students, there were few moments when students commented on each others’ thinking, and misconceptions were not used as learning opportunities. All this was a problem because the school was trying to bring math instruction up to Common Core levels.

Zrike and Connolly created a transcript of classroom math questions from their visits, asked teachers to read an article on question types, and devoted several grade-level meetings to this topic. At first, teachers were reluctant to look at the transcripts, fearing they would reveal ineffective instructional practices. But teachers’ names weren’t attached to the questions and the exercise of sorting them into two categories proved to be non-threatening and eye-opening. The two types mentioned in the article were “funneling” questions (leading to one right answer) and “focusing” questions (more open-ended and thought-provoking). Here are some examples of each:

- Are these pieces bigger or smaller?

- How many multiples of 24 are there?

- Do you agree or disagree?

- Did anyone else make it simpler?

- Is that a fraction?

- What are you going to put right there?

- So which one is your answer? You have 2 numbers circled.

- Is it getting bigger or smaller?

- How do you know this answer doesn’t make sense?

- Tell me which answer is ridiculous and why.

- Why is this more complicated?

- Can you explain it again?

- Do you want to explain what she said?

- How did you know that?

- Why was I confused?

“Teachers said they had no idea that they were asking so many funneling questions,” says Zrike, “and felt that it would be easy to make some of the same questions more focusing.” For example, the question, “Would 8/7 be more than a whole?” was rewritten as, “What does the fraction 8/7 tell us about the whole? How do you know?” Teachers went to work on crafting higher-level questions with a new consciousness of questioning rigor.

Classroom observations a few months later showed a marked improvement: “A majority of the questions asked by teachers probed students to explain how they solved a problem, why they solved it that way, and how do they know they problem-solved correctly,” says Connelly. “Often, teachers exhibited longer wait times, which is necessary when asking cognitively demanding questions requiring significant language in the answers.” In that spring’s state MCAS testing, the school showed a significant uptick in math and literacy scores.

Back to page one

Two Ways to Improve the Quality of Academic Discourse

• Calling a mulligan – In sports, a mulligan is letting a mistake pass unnoticed or without consequences. In classrooms, mulligans are helpful for students who may be unwilling to risk making a contribution for fear that they’ll be criticized or feel stupid: a person can stop in mid-sentence, say “mulligan,” take a deep breath, and start over (or opt out of making a statement). “Speakers are more willing to engage in controversial discussions because they are allowed to take an immediate second shot at their statement,” says Arter. “Audience members listen more carefully to the entire statement because they realize a mulligan might be used at any moment.” Students may also see how mulligans can apply to their writing – they might get in the habit of looking at it again versus running a spell-check.

• The five Rs: respond, repeat, restate, rebut, and reinforce – When a student finishes responding to a question, the teacher tosses a Koosh ball to another student and says, “Repeat” and the student tries to reiterate what the first student said. The Koosh ball then returns to the first student, who is asked to “Restate” if the previous student didn’t capture his or her meaning. The Koosh ball then comes back to the teacher, who tosses it to another student and says, “Rebut” and that student has to either disagree or agree with the original response and give a reason. The Koosh ball then goes to another randomly selected student to “Reinforce” – this student has the option to support either the original response or the rebuttal with additional supporting evidence.

“When combined, these two methods have been extremely successful at increasing respectful student debate and limiting my involvement to the simple R commands,” says Arter. “Students listen more actively, speak more freely, and – as a bonus – apply the state-and-support scaffold to their academic writing.” 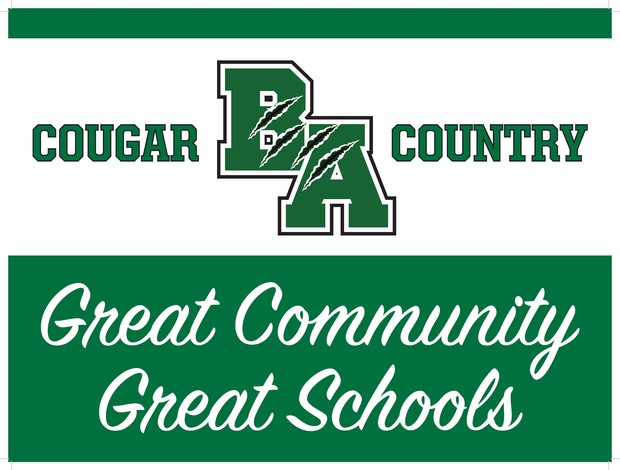 Don't forget to join us in Reclaiming Cougar Country!

1. Purchase a yard sign from Bryan Adams High School Student Council members or from your local PTA. Order form is below. $5.00 each

2. Help increase communication by sharing good news. It's simple; just write a short description of an upcoming event or summary of a recently held event with a photo. Share news in the following ways:

3. Consider volunteering with our "Roaring Readers" program. We are committed to ensuring all first grade students finish the school year reading on or above grade level. This is a significant challenge and community support will make a big difference. Please visit the link below to learn more and share it with a friend.

Together we can make a difference in our community for our children. It's a great time to be a cougar! Thank you for your partnership,

Follow Jolee Healey
Contact Jolee Healey
Embed code is for website/blog and not email. To embed your newsletter in your email, click HERE to see how or reach out to support@smore.com