Your new School Board 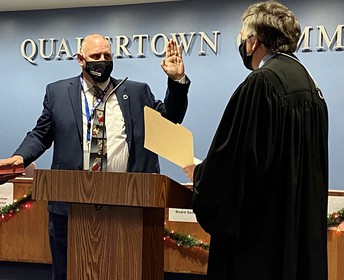 Jonathan Kern was voted in unanimously as president, with Ron Jackson getting the nod as vice president. They faced no opposition.

The five new members, sworn in by Magisterial District Judge Gary Gambardella, were Todd Hippauf, Glenn Iosue, Michael Post, Diane Richino, and Charles Shermer. Each was victorious in the November 2nd election. Mr. Jackson was the lone incumbent to be re-elected.

Mr. Kern, who made pledges to fellow Board members, the Administration, and the community, said he was “honored and humbled” to be selected as president. He called it a “privilege” but acknowledged the “competing demands” of parents, students, taxpayers educators, and staff.

He recalled that during Board retreats, the facilitator often opens the discussion by saying “when you talk about someone’s kids and their taxes, those are very sensitive subjects. So we’re often in the thick of things.”

His pledge to colleagues: “I’ll try to set the stage for the support to become a highly performing team.” He’ll allow for “spirited and respected discourse, seeking to understand before speaking.”

His pledge to the Administration: “We’ll work collaboratively with the Administration and staff setting vision and goals in the new year. If we can help everyone do joyous and meaningful work, that’s pretty awesome in life.”

His pledge to the community: “We’ll continue to listen to our stakeholders, from parents with kids in the district, taxpayers, those on fixed incomes. There’s a wide range that we have to support, the well off to the poor in our community, especially those who have no voice. Those are the ones I really feel we need to stand up for.”

Mr. Kern also encouraged the community to “follow the chain of command” by working out challenges with teachers, principals, and district office before communicating with Board members. “We’re on top of a $120 million corporation. We are not in your buildings, thank goodness. We charter the vision and goals, we set policies, have specific fiduciary responsibilities. We hire competent admin and leave most of that to you. It’s not to say we’re not involved, but we’re not in the weeds.”

Meet the new Board Members

In the November 2nd election, six Directors were elected to the Quakertown Community School Board. One, Vice President Ron Jackson, was the lone incumbent.

The new members were asked what they would like the community to know about them, and why they sought a seat on the Board.

Here's what they had to say. 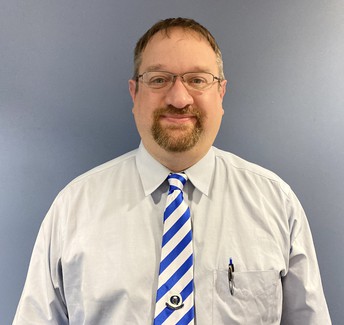 I ran for this office because I believe I offer a unique and valuable perspective. My wife and I have been members of the Quakertown community for the past 14 years. We have two great kids that are currently second- and sixth-graders in the district. As a parent, I want my children and all the children in the district to receive the best possible educational experience. Our children’s education is priceless, and they deserve the best we can provide.

My background is in accounting and I am a regional controller for Georgia Pacific. I am responsible for managing the budgets of eight plants with over a billion dollars in revenue and I engage with people from all different backgrounds to brainstorm and solve problems. I understand the value of being fiscally responsible and I will work with the Board of Directors and QCSD Administration to reach a balanced budget that meets the students’ needs and keeps the taxpayers in mind.

Finally, my wife is a teacher in a neighboring school district. I have a front-row seat to the effort, struggles, and successes of this profession. I will seek input from all members of the school community - students, staff, residents, and administration - to consider how we can foster a supportive school environment for everyone. 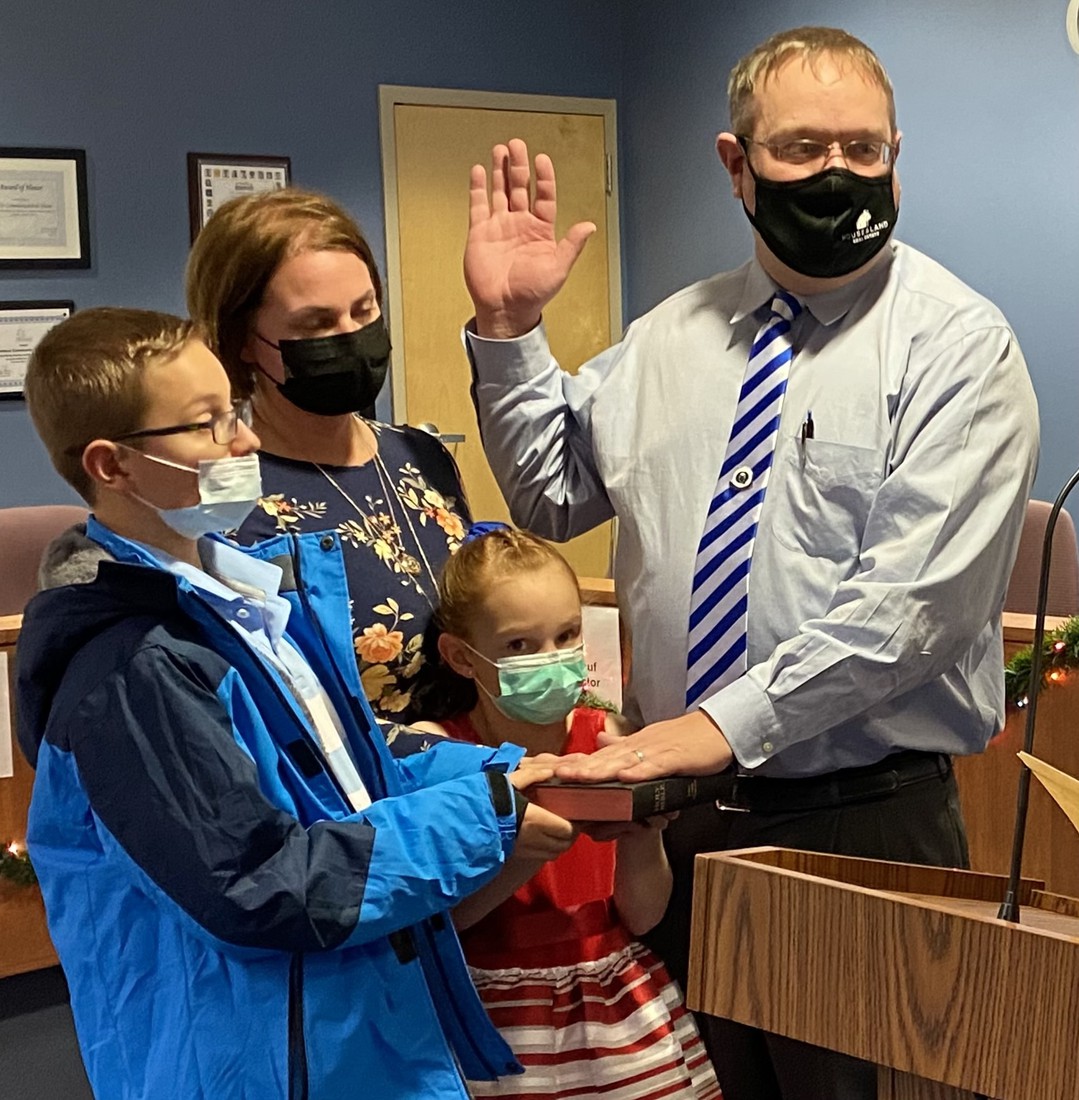 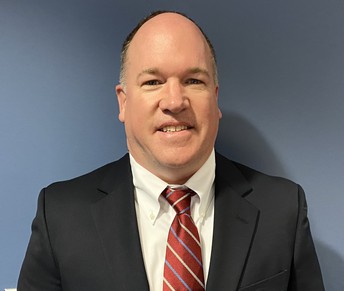 I enjoy spending time with my family. My wife Michele is a graduate of Quakertown Community High School and a resident of Milford Township for more than 40 years. We are the proud parents of four children; two daughters and two sons. Our two youngest children attend Pfaff Elementary School. As loving parents, we value education in nurturing and developing our children and our lives.

I attained my Bachelor’s degree in Bioenvironmental Engineering, am a licensed Professional Engineer, and a Board Certified engineer. I have more than 23 years of engineering and environmental consulting experience. In my profession, I frequently work with lawyers, scientists, engineers, and stakeholders in providing solutions on large and complex projects. 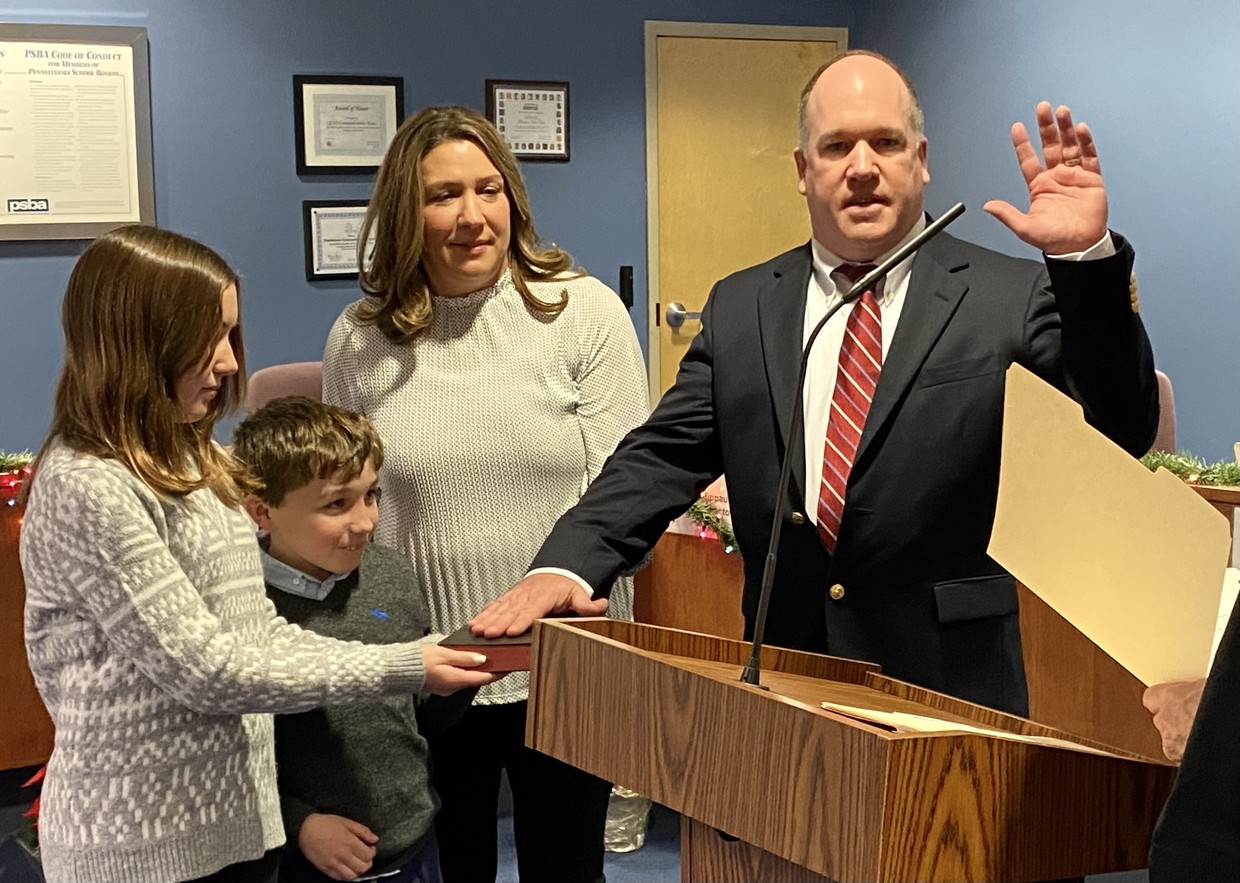 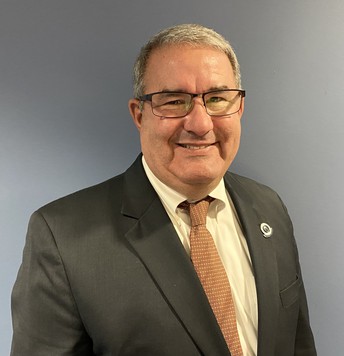 My wife and I have lived in Quakertown for 31 years. We have two children who are successful QCSD graduates. I am a small business owner who enjoys many activities including fishing and college sports in my free time. We have had many rescue dogs over the years and currently have a Labrador retriever.

I ran for School Board because I think my experience fits with the needs of our students, parents, teachers, staff, and taxpayers right now. 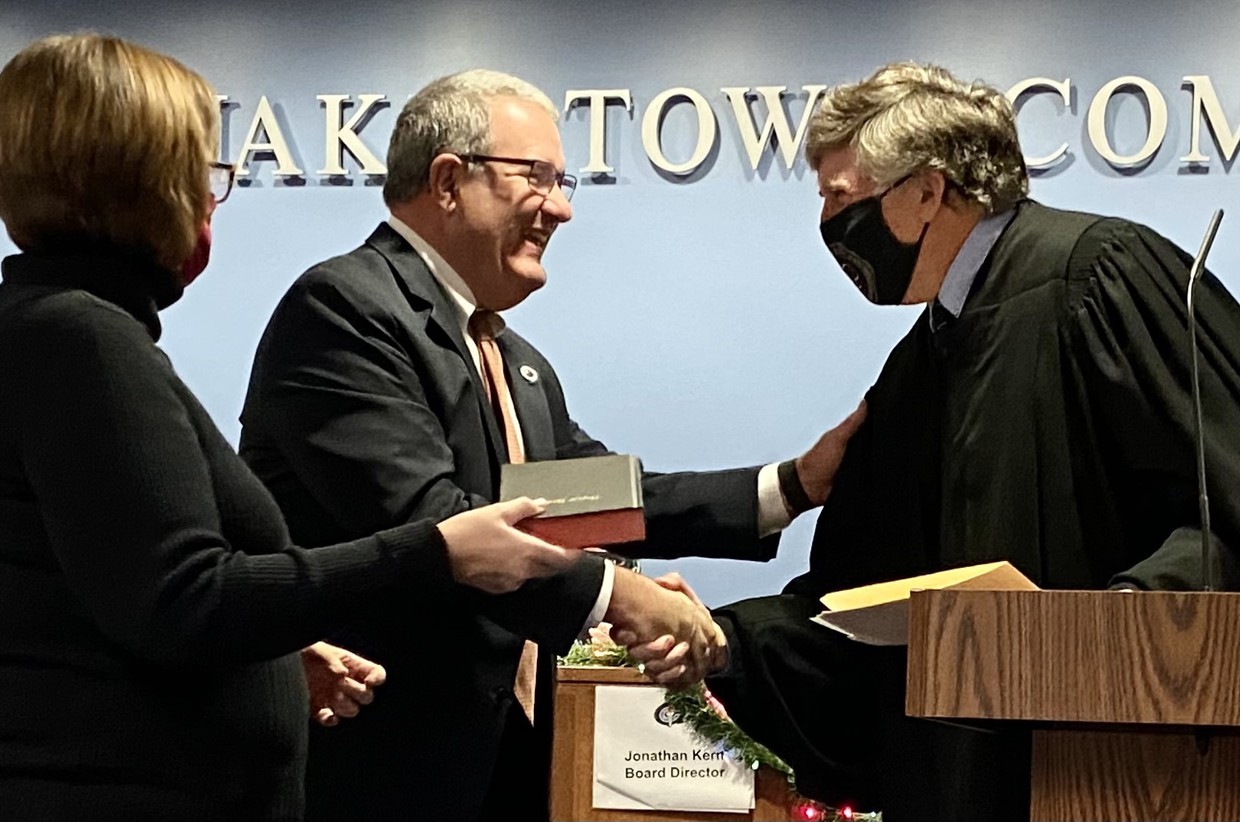 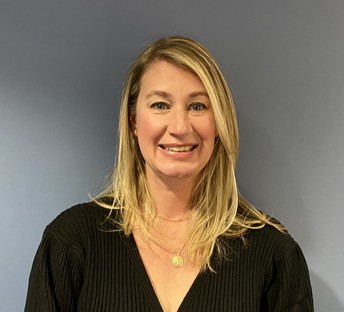 Since 2013, I have served the district on several parent committees including: Richland TPO (2013-2014), the QCSD Facilities Committee (2015-2016), the QCSD Redistricting Committee (2017), and as the Chair for the QCSD Safety Committee (2018). My involvement on these committees has provided me the opportunity to understand the analysis and funding needed to make sensible recommendations that impact our schools and students. For these reasons, I believe I am well prepared to support our District Administration to make decisions that focus on the high-quality education our students deserve and keep taxpayer needs in mind.

As the daughter of a retired teacher and school administrator in the Council Rock School District, I am uniquely qualified to understand all sides of the challenges we face as a district. Growing up with educators has instilled a great appreciation for the positive influence our education professionals can have on our children.

To me, giving back to our community is an important part of who I am. So, I am excited to have the opportunity to represent you as a School Board Director. 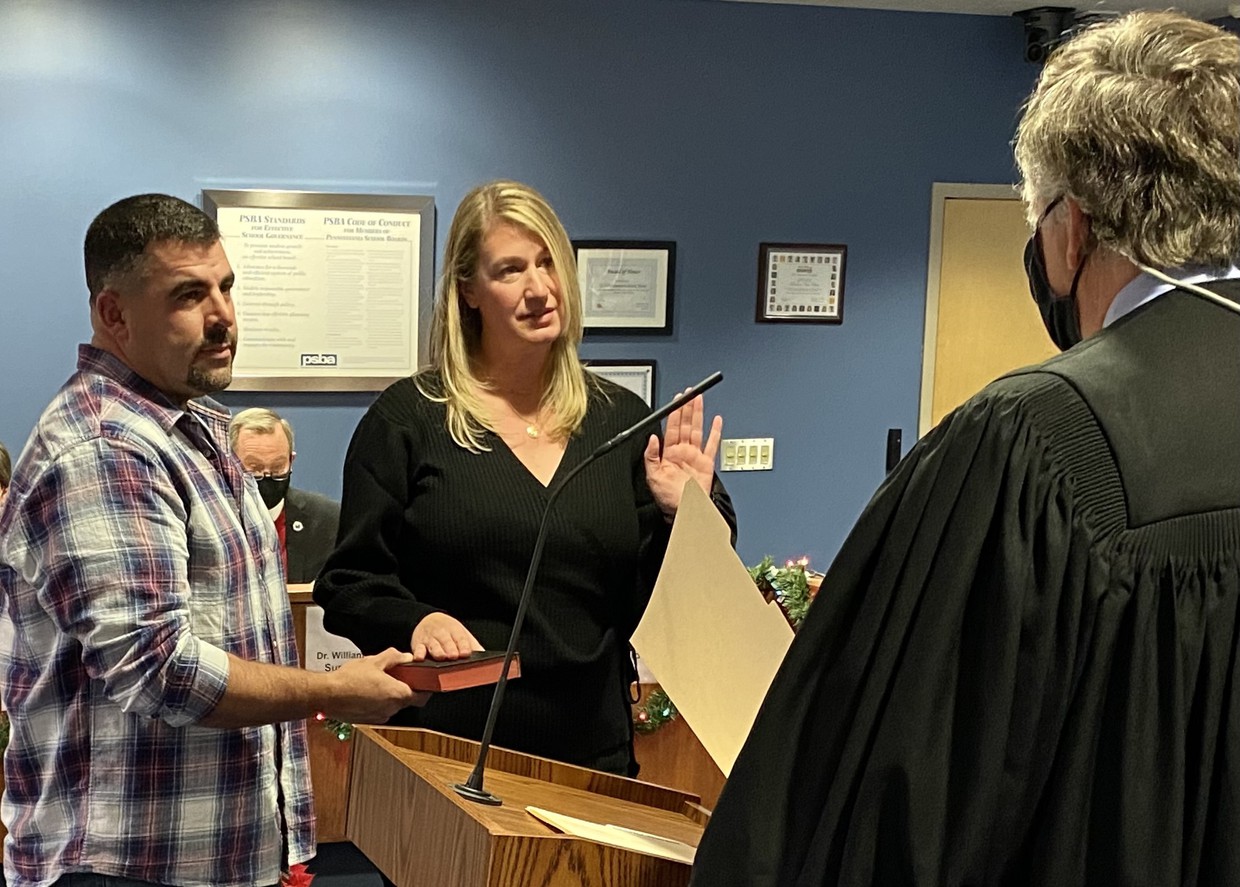 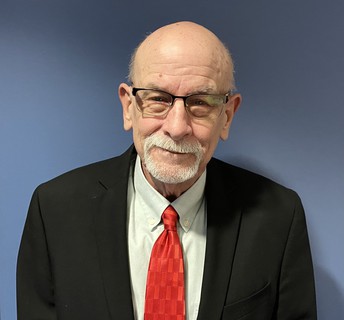 I view becoming a Board member as an opportunity to serve. We owe our kids a great education. I feel we need to continuously improve our STEM offerings as well as support Athletics. 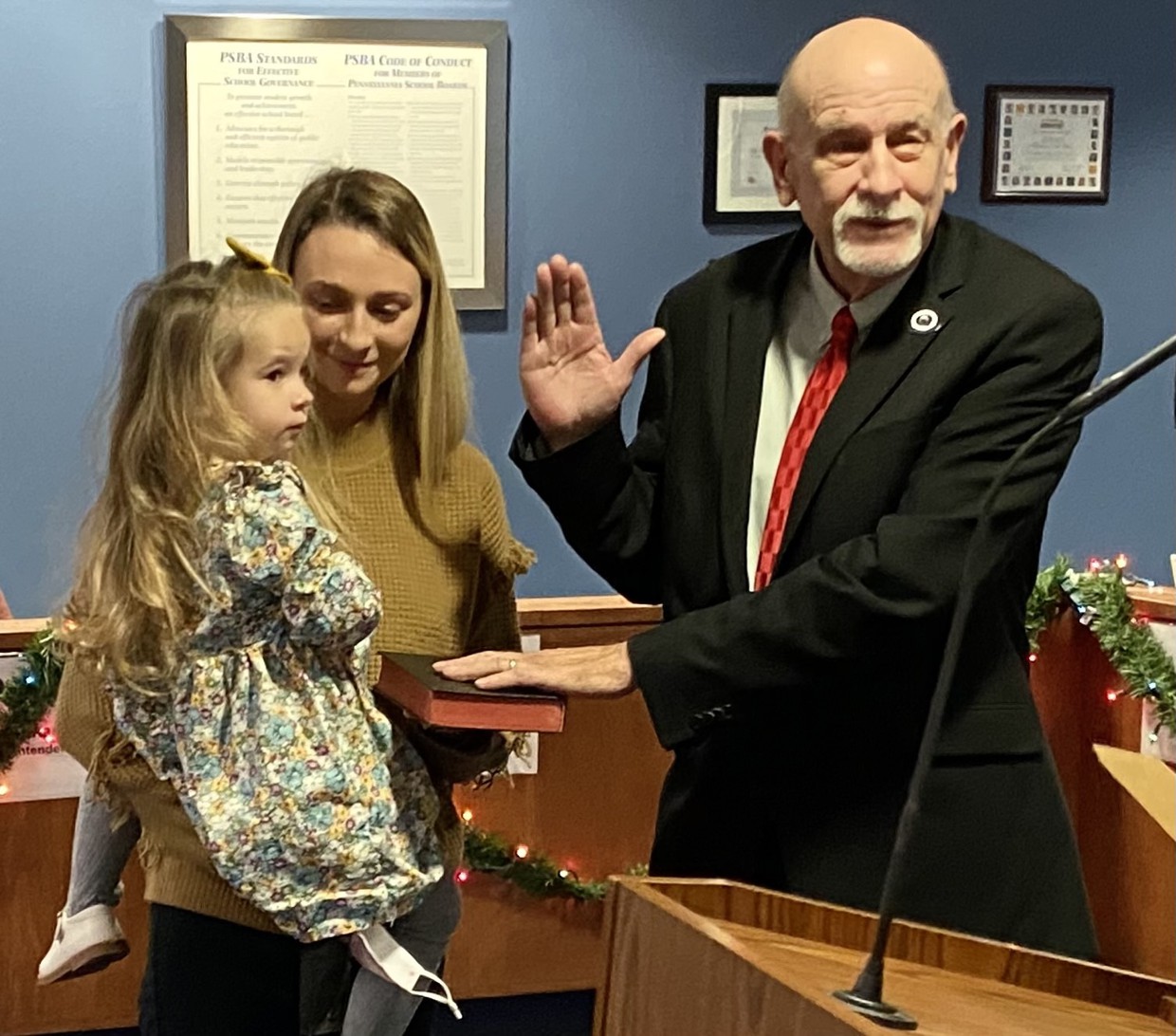 The Board recognizes that communication to and from them is important. You may contact all members of the Board at once by emailing board@qcsd.org. Board Secretary Terry San Angelo will also receive that email along with the Superintendent's Cabinet, which includes Superintendent Dr. Bill Harner, Assistant Superintendents Nancianne Edwards and Dr. Lisa Hoffman, Director of Pupil Services Janet Pelone and Director of Technology Joe Kuzo.

Individual Board members may be contacted individually through their district email. That information may be found by clicking here. Please be reminded that Board members are volunteers and that responses may not be immediate. 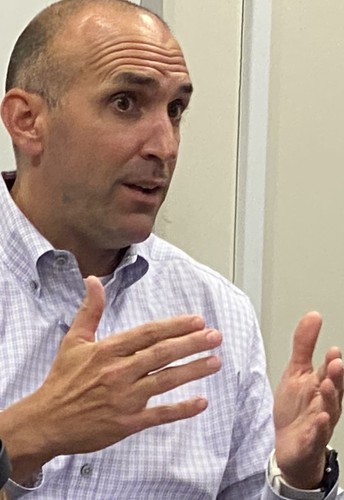 One School Board passes the baton to the next

Once every two years, the Quakertown community goes to the polls to elect or reelect four or five new School Board members. This year it was six. It's a major transition for the policymakers charged with the responsibility of the education of 4,811 students and a $119 million budget. During their final meeting, after serving four years as School Board members, Keith Micucci and Kaylyn Mitchell shared a recent conversation they had in which they commended the previous Board for “making difficult decisions” that put current School Directors in a good place.

“Part of our financial stability was made on tough decisions prior to us getting here,” Mr. Miccuci said at the November 11th Board meeting. “That put us in a decent position moving forward. … We are a financially healthy organization, and I hope that can continue into the future.”

The Quakertown Community School District and Quakertown Educational Support Personnel Association (QESPA) have reached a Memorandum of Understanding (MOU) on a recruitment and retention plan that includes pay increases in affected categories, changes to longevity pay, recruitment bonuses and restructuring the number of hours for some positions.

The Quakertown Community School Board unanimously approved the agreement at its November 11th meeting. QESPA’s membership, which includes approximately 225 full- and part-time employees, including secretaries, food service workers, custodians, maintenance staff and aides, voted in favor of the plan on November 22nd. 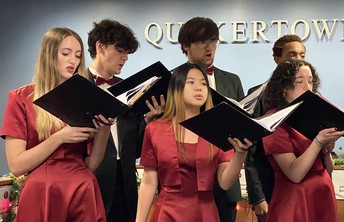 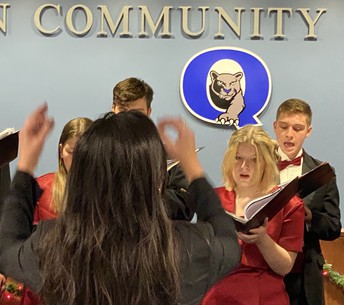 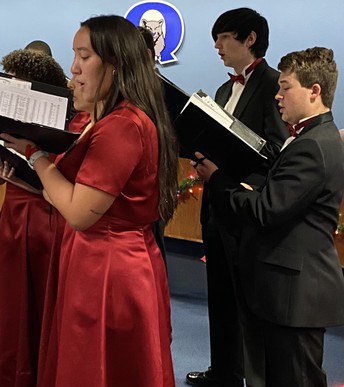 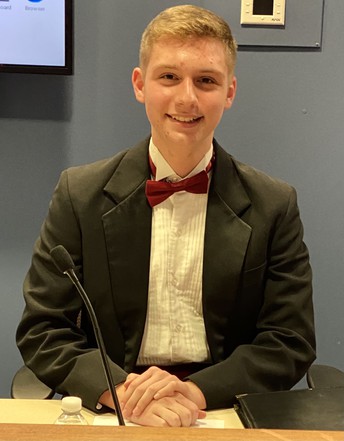 First, there was the wonderful performance by the Quakertown Community High School Varsity Singers and then a cross country runner, three golfers, and the history-making football team received recognition at the December 2nd School Board meeting.

And Bryce Widdoss, a junior, followed that up with his report to the Board about high school happenings as the student representative.

“Our students performed very well under the spotlight,” Principal Mattias van 't Hoenderdaal said. “The stage was certainly not too big for them. I’m very proud of the leadership they showed.”

Rebekah Hickey, who missed her sophomore season with a stress fracture, “came back with a vengeance” as a junior, Coach Mike Mooney said, as she became the first Panther to qualify for the cross country state championship. Rebekah won four of five dual meets, finished second in the other, and medaled in every invitational. “She performed outstanding,” he said. “It is an honor to coach her.”

Like Rebekah, golfer Nick Joyce was the first Panther to qualify for the state championship in his sport. Nick, along with teammates Brady Gallagher and Ty Wilkin, “enjoyed a lot of success this year,” Coach Steve Oltman said. “They have worked very hard to get to where they are.”

Perhaps the biggest sports story of the year has been the football team’s remarkable ride, compiling a 13-1 record - the most victories in school history - including a 21-0 shellacking of Pennridge on Thanksgiving. The conference champions reached the district semifinals for the first time and had a record 19 players make all-league.

“They held themselves to such a high standard academically, behaviorally, working in the community, giving back to the community and then on the field.” Coach George Banas said. “I talked to them all year about coming out of the pandemic and how much they meant to the community. They don’t realize it now as teenagers. They brought Quakertown back together. On Friday nights, this town forgot about everything else. … the community was absolutely phenomenal. There wasn’t a seat left in the stands at Alumni Field. What these kids did for the high school, for the community, they’re going to realize later in life, that it was a turning point.” 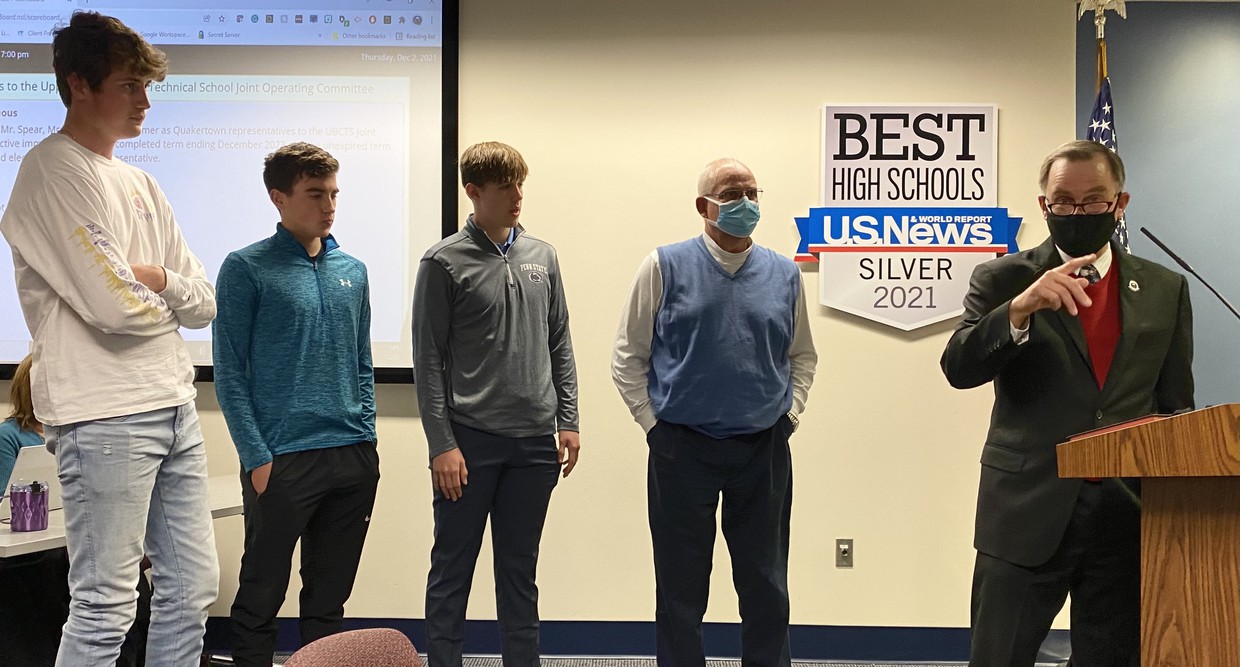 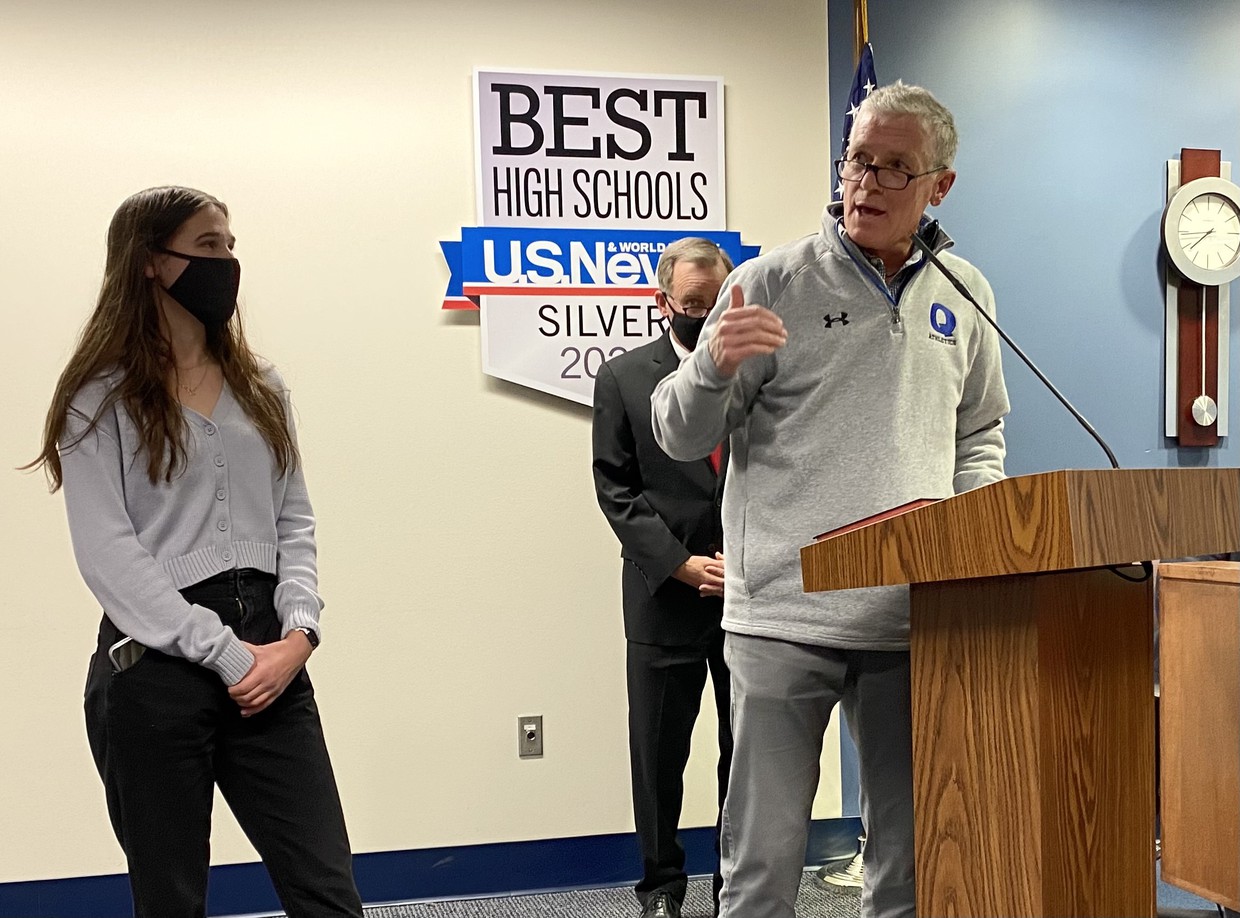 Here's when the board meets