The huge increase in plastic surgery for a 'perfect' body

The huge increase in plastic surgery for a 'perfect' body

Over the past decades their has been a dramatic spike in plastic surgery. From breast augmentations to facial reconstruction the possibilities are almost endless. But the true purpose of this type of medicine was to help better people's lives, and while it has, it's all for the wrong reasons.

The creation of plastic surgery was originally intended to help with the reconstruction of badly damaged superficial features. Plastic reconstruction surgery gained major prominence during WW1 after many of the soldiers returned home with severely disfigured faces. Over the course of the years, however, plastic surgery has taken up a new main purpose and that is to redesign a person's body to fit in or to have the ideal image.

Last year alone, 15.6 million dollars (Bradford S. Patt) was spent on plastic surgery procedures-most of which went to surgeries that weren't needed (by this I mean people who aren't happy with their appearance as opposed to those who have severe disfiguration). While that amount of money is almost staggering, in 2014 alone there was also an increase of 3% when it comes to cosmetic surgery. This percentage may seem low but over the years there's been a steady increase and it'll only continue to rise.

While the above number is pretty high, it doesn't come close to comparing how much money Americans have spent since 2013-a combined total of $12 billion American Society for Aesthetic Plastic Surgery. The dramatic spike is due to a popular ideology that every person needs to obtain the 'perfect' body. This body is described as having a physique that is only found naturally in a handful of men and women which results in many people working out and undergoing surgery to feel a sense of acceptance.

No matter the reason, the numbers for plastic surgery are expected to continue rising in the upcoming years.

With women starting to fear the inevitable process of aging, many have turned to Botox and facelifts. 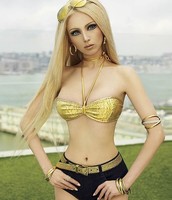 One women took the image of Barbie a little too literally. Valeria Lukyanova claims to have no plastic surgery done, however that claim is too bold.