yuzek is using Smore newsletters to spread the word online.

Get email updates from yuzek:

History of the Odyssey

The Iliad and the Odyssey are two of the most read and widely celebrated epic stories even after three thousand years. These stories are widely known but what's not is the author himself. We know that he was most certainly a Greek poet and most likely lived in the eighth and the early seventh centuries B.C. This Greek poet was a blind man named Homer. 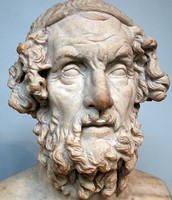 Homer wrote the Odyssey on the Trojan war. The Trojan war took about a decade and another 10 years for Odysseus to return home to Ithaca. During the return to Ithaca Odysseus lost many men to the Cyclops Polyphemus, angry gods, storms, witches with potions that can change who you are, the underworld, and even sirens. After Odysseus reached Ithaca he wasn't done with his journey. After ten years have passed their have been big changes having to do with his wife and son, making it a challenge for Odysseus to return to his "home".

How is the Odyssey being implemented within modern western society?

The Odyssey has many concepts that relate to our western society such as home and family, the treatment of strangers, what constitutes a hero and truth. During the whole story Odysseus tries to get back to his home in Ithaca and most importantly his family this shows us how important family was to the Greeks. We still have this idea of home and family today such as a soldier coming back from Vietnam returns to his/her family and home. In the odyssey we see how Odysseus is being treated when he is under disguise as a beggar and his own servant doesn't recognize him but he offers the disguised Odysseus a place to stay and food. In our society today we follow the same concept such as helping a homeless person by giving them money or food, in some cases also a place to stay. In Odysseus we see him as a hero who is the leader of men and fights for glory and victory and that's how the hero's of those times mainly were, while in Today's society our heroes can range from Lady Gaga to a soldier fighting in Iraq. In todays society we say we value truth when in reality we don't always say the truth 100%. We see the same concept in Odysseus when he lies at times to get what he wants.

How would the originators of these elements of our society feel about its current implementation?

Homer, the writer of the Odyssey would be perplexed on how much literature has changed throughout time, but change in a good way. Ancient Greek literature has affected our modern society so Homer would have no problem in understanding the literature of today. Today we have many genres of literature such as comedy and tragedy, etc. but whatever it is, it derived from the Ancient Greeks

How do we amend these institutions to faciliate posotive change within our society?

Were not perfect so not all of the time are we going to follow or do what is right. Home and family is important but sometimes we take it for granted. Once any of our family members leave us we realize what we have lost and feel sorry but its to late. Everyday we should give thanks for having a home and most importantly a family because not everyone has a mother or father. As for the treatment of strangers helping homeless people find jobs and finding them a home would be more than what that person could ask for. For what constitutes a hero in our society would depend on who we adore and their are many if you think about. Being thankful to our heroes would make them do even more heroic acts. Telling the truth would also be considered a heroic act but its not something that is always done. Telling the truth could save a life and make for a better life. These institutions seen in Odysseus could help us as a society prosper we just need to know how to facilitate them properly.

yuzek is using Smore newsletters to spread the word online.