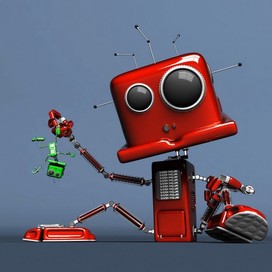 Get email updates from Lay Moo:

Re written and retold by Lay Moo Tun

Re written and retold by Lay Moo Tun

Once upon a time there was a village and there lived an ugly girl named Little Egg Riding Hood. Her parents named her that is because they always loved egg and, they wanted their first born baby to like eggs as well, so they named her Little egg riding hood.

One day her mother told her to take some red bull and chocolate cake for her grandma who had ill for 199 years, so off she went to her grandma house. On the way there she saw a wood cutter who was chopping lion instead of chopping trees down. She kept walking and suddenly a harry-ugly wolf came out of the ground, and said “Hi Little egg riding hood” “Hi” said little egg riding hood, “where are you off to” said the wolf, “to grandma who live down 100 blocks away” said little egg riding hood. The wolf was about to eat her up but she took out a red bull and smack the wolf in the face and ran off. She ran, and ran, and ran, and ran, until he got to grandma, she was so tired and nearly died. She had never been that scared and never had run so far.

She knock on the door ‘knock, knock’, her grandma open the door and said “come in dear”, the voice of her grandma sound weird and wasn't shore if it was her grandma so she asked her question. “Why you are so harry like the wolf I saw on the way, plus why did your voice change” “didn't your mother told you that I had ill for 199 years” “yes, but yesterday when I visited you your voice was fine, and why is your teeth so big and fat like a chicken” “So I can eat you up and your grandma”. Little red riding hood faked cry and her grandma came out of the toilet and said “what wrong dear” “you’re going to eat me up” “what are you talking about my dear” than suddenly her grandma saw the wolf and scream than little egg riding hood scream too and the wood cutter herd them and came running. When he got there little egg riding hood was already hitting the wolf with the read bull. The wood cutter hit the wolf with a lion leg, the wolf was down and they had a party, her grandma ill was gone after her dance with a handsome young boy. They drank red bull eat KFC, hungry jack, and drank beer.

After one month the wolf came back and the villages threw red bull at the wolf, the wolves flees and never came back ever again and they lived happily ever after. ‘NOT’.

but there's a normal fairy-tale by me

Follow Lay Moo Tun
Contact Lay Moo Tun
Embed code is for website/blog and not email. To embed your newsletter in a Mass Notification System, click HERE to see how or reach out to support@smore.com