How would you feel to be taken from your home, separated from your family, forced to work, and possibly even starved?

The protagonist is Eliezer Wiesel, a young boy who lived with his mother, father, and three sisters. He was originally a religious boy, but while he was at the concentration camp, he started blaming God for everything that happened. He changes very much throughout the story. The antagonists are the SS Officers. They run the camps and ruin the lives of many.

Night is about a young Jewish boy named Eliezer who lived with his mother, father, and three sisters in Sighet, Transylvania. His family was taken from their home and sent to Auschwitz in 1944 where they were separated. Eliezer and his father continued their horrible journey together through camps and horrendous living conditions.

The major conflict in the story is that Eliezer has to stay strong and alive through the different concentration camps that he experiences on his journey. He must also stay true to himself and to God which is one of the hardest things for him. 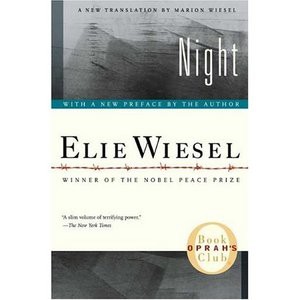 Follow Abby Kinsella
Contact Abby Kinsella
Embed code is for website/blog and not email. To embed your newsletter in a Mass Notification System, click HERE to see how or reach out to support@smore.com
close