How the Solution to WWI is the Start of WWII: by Ian Thomas

How the Solution to WWI is the Start of WWII: by Ian Thomas

The Treaty of Versailles was the official end to World War I on June 28, 1919. The treaty was negotiated by the allied powers, which had minimal participation from Germany. The treaty proposed that Germany pay their reparations to other European countries under the Dawes plan and the Young plan, which were dropped in 1932, and Hitler began to rise into power. 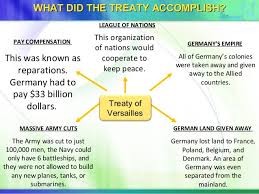 The Treaty of Versailles, was negotiated in Paris, 1919, where it was written by the allied powers, with minimal participation of the Germans. The negotiation resulted in a split between the French, who wanted to part ways with Germany to make it difficult to renew war.

Significant Parts of the Treaty

Did you know that the Treaty of Versailles has 15 parts and about 440 articles? 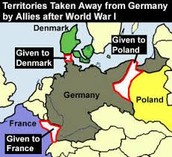 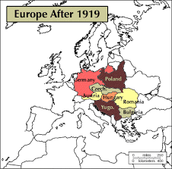 Color Map of Germany (After Loss)

Germany disobeyed many of the disarmament articles of Part V (See list above) during the 1920's, and later on Hitler rejected the entire treaty altogether in 1935. From March 1937 to March 1939, Hitler repealed the territorial articles of the treaty with at least the implied approval of the western powers. On September 1, 1939, Germany attacked Poland to change that boundary, as well.

After 1945, the United States government as well as the British governments avoided most of the problems caused by the Treaty of Versailles, specifically problems regarding Germany's reparations, and the segregation of Germany and the Cold War generously allowed them to rebuild the western zones and to add them into a western alliance without rising up fears of German aggression.