Jalynn is using Smore newsletters to spread the word online.

Get email updates from Jalynn:

Events of the South West

Events of the South West

Battle of the Alamo

Result: Texas decided it wanted to be independent of Mexico

In December 1835, during Texas’ war for independence from Mexico, a group of Texan volunteer soldiers occupied the Alamo, a former Franciscan mission located near the present-day city of San Antonio. On February 23, 1836, a Mexican force numbering in the thousands and led by General Antonio Lopez de Santa Anna began a siege of the fort. Though vastly outnumbered, the Alamo’s 200 defenders–commanded by James Bowie and William Travis and including the famed frontiersman Davy Crockett–held out courageously for 13 days before the Mexican invaders finally overpowered them. For Texans, the Battle of the Alamo became an enduring symbol of their heroic resistance to oppression and their struggle for independence, which they won later that year

On April 21, 1836, during Texas’ war for independence from Mexico, the Texas militia under Sam Houston (1793-1863) launched a surprise attack against the forces of Mexican General Antonio Lopez de Santa Anna (1794-1876) at the Battle of San Jacinto, near present-day Houston, Texas. The Mexicans were thoroughly routed, and hundreds were taken prisoner, including Santa Anna. In exchange for his freedom, Santa Anna signed a treaty recognizing Texas’ independence.

The Gadsden Purchase, or Treaty, was an agreement between the United States and Mexico, finalized in 1854, in which the United States agreed to pay Mexico $10 million for a 29,670 square mile portion of Mexico that later became part of Arizona and New Mexico. Gadsden’s Purchase provided the land necessary for a southern transcontinental railroad and attempted to resolve conflicts that lingered after the Mexican-American War.

On May 12-13 the Battle of Palmito Ranch was fought and won by the confederates in south Texas. This was the last major clash of arms in the Civil War, occurring even though the war was technically over. On the first day the Union evacuated under pressure, but returned the following morning moving toward their destination of Palmito Ranch. But the Confederate troops attacked, again forcing the Union troops to evacuate for good, but this time with a good number of casualties. It was a Confederate victory under Col. Ford. Soldiers of all races were involved in the fighting, Native-Americans, African-Americans, Hispanic Americans, and white Americans. All were united in fighting against for what was left of their party and their country. There were 118 Union casualties and no confederate deaths.
This Battle of Palmito was remarkable because it occurred after the Civil War had been concluded for over a month, and yet both sides fought passionately. The Confederates were holding onto the last hope of keeping their land, and the Federalists were holding onto their honor and fighting in the name of the United States. It is ironic that the final battle fought in the Civil War was won by Confederates, but it goes to show how both the North and the South were valiant fighters, and a battle can go either way on a particular day. This battle also demonstrates that the Civil War could have continued after April 9th, 1865 in guerrilla warfare.

Migration from the original Cherokee Nation began in the early 1800’s. Some Cherokees, wary of white encroachment, moved west on their own and settled in other areas of the country. A group known as the Old Settlers previously had voluntarily moved in 1817 to lands given them in Arkansas where they established a government and a peaceful way of life. Later, however, they were forced to migrate to Indian Territory. 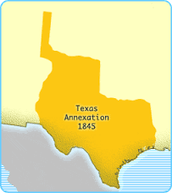 In 1835, fighting broke out between the Mexican Army and Anglo-American colonists who were angry with the Mexican government for attempting to limit the practice of slavery and for violating the Mexican constitution. In 1836, they declared Texas an independent state, called the Republic of Texas. After a decisive Texan victory at the Battle of San Jacinto later that year, fighting stopped. The Mexican government, however, never recognized the new state, and for the next decade, the Lone Star Republic had a shaky existence. It was under constant threat of invasion from Mexico, and the government did not have enough money in its treasury to work effectively.

For additional reading on the various subjects.

Jalynn is using Smore newsletters to spread the word online.