Cate is using Smore newsletters to spread the word online.

Get email updates from Cate:

What is a Gladiator?

Gladiatorial Games came about about 300 years before the Colosseum was built. It is believed to be a fight between two people which often ended in death. It was used for the entertainment of the Roman people. Most of the time slaves and criminals were the participants, but sometimes there would be volunteers for the fights. It was very hard for a gladiator to gain freedom. To do it, they would have to win multiple battles for an emperor to grant them freedom.

When the Colosseum was built in 80 A.D., the games began to change. The Colosseum definitely one of the biggest structures that had been built up to that point, if not the biggest. On a regular day, the stadium would be filled with people all across Rome. The building of the Colosseum changes the games, because multiple victories could give that Gladiator fame across the Empire. Gladiators were even believed to be endorsed by products and beloved by hundreds of fans if they put on a good show. This increased interest and enthusiasm for people to volunteer to be entered in the games so they could gain fame.

The earliest games took place due to the death of a wealthy noble who died. The blood that was spilt would signify purity for the lost soul. Once Caesar's daughters past and a fight was held for them, it was widely popular. Gladiators began fighting across the Roman Empire for entertainment. Soon it became part their lives. After the Roman Colosseum was built, the fights changed by becoming a little more organized by separating the warriors into different classes and levels depending on their skills or record. There emerged different specific styles of fighting which went along with different weapons and armor. Sometimes, there would even be a referee on the sideline to stop a boring match and call it a draw.

Gladiators were treated with luxury for the time they lived. The ones who lived through battles seemed to get the best medical treatment of that age. They would huge celebrities who ate well and on special diets. However, this luxury usually didn't last very long because few were able to make it to freedom.

Although it may be surprising, women also competed and were a part of the sport. They were called "Amazons". They became a common figure as gladiators around the 1st century A.D. They were not taken as seriously as men were, and even pitied by some emperors when they fought. There were many who proved themselves in a good fight. 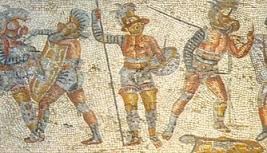 Relation to the Holocaust

Despite the fact that the Holocaust was hundreds of years later, thematic relations are present between the Holocaust and bloodsport. The Roman and German governments manipulated their power into a fight for survival for different reasons. The Germans used it for discrimination of different social and religious groups across Europe, while the Romans used it for pure entertainment.

Every gladiator had to have some kind of weapon or defense. Sometimes they could pick their weapons, but other times they were forced to fight with other ones to resemble a defeatet tribe that fell under Rome.

Eques- Fought on a horse with a sword and shield

Laquerarii- Fought with a lasso and knife or sword

Retiarii- Fought with a net and trident

Andrews, Evan. “10 Things You May Not Know About Roman Gladiators.”- History.com

Cate is using Smore newsletters to spread the word online.