Linnea is using Smore newsletters to spread the word online.

Get email updates from Linnea:

Hammurabi's Code Was it Just?

Was Hammurabi's code Fair? Or not?

Hammurabi's Code Was it Just?

Was Hammurabi's code Fair? Or not?

Was Hammurabi's Code Just? I believe it was because after reading some of his laws, it was very clear that the laws were made so that everything was fair. For instance, in Law 148, it says that if a wife is struck with disease and the husband wants to marry another woman, he must still care for his old wife until she dies. This is very fair and it protects the innocent woman who is sick, from being abandoned. Another example is in Law 168, it says that if a father wants to disown his son, the son has to have made a grave mistake, or the father can't disown him. This protects an innocent son from abandonment and makes it very fair. These laws show that Hammurabi was being fair and not letting innocent people face challenges unless they really deserved it. 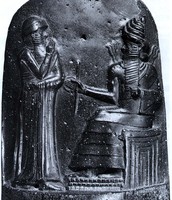 This is a picture of Hammurabi and the god of Justice. This carving is at the top of the stone that the code is inscribed on.

(This image is from Historians.org)

This is what some of the laws look like on the stone which they are inscribed on.

(This image is from Traveltoeat.com) 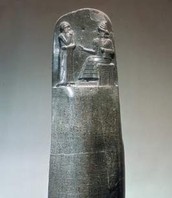 This is what the full stone looks like, 242 laws and all!

(This image is from kids.britannica.com)

Some of Hammurabi's laws had harsher punishments then others. Some had great rewards, and some caused you to give up money. The punishment depended on the victim, and how important they were. If you did something to a slave, the punishment was small because slaves don't have a very high value. If you hurt a free man, the punishment was more because the value of the person is more. This is just, because even though slavery is unfair, if someone hurt a slave, some of their det was payed by the person who hurt them, which is fair. Here is an example of a law and how it has punishments and rewards. In law 215, it says that if a surgeon is working on a person with a bronze lancet and he saves the persons life, he shall recieve money as a reward. In law 218, it says that if he is operating on a person with a bronze lancet and causes the death of the person, "his hands shall be cut off". Law 215 is fair because if he saves the persons life, of course he should be rewarded. Now, the majority of Hammurabi's laws are just, but law 218 is not. If a surgeon accidently causes the death of the person his hands should not be cut off because it was an accident. He was trying to save the person, and probably the person being operated on had said yes to the surgery, so basically it is not the surgeons fault. He did what he could. This is one of Hammurabi's laws that is not fair, but majority wins for fair laws!

Linnea is using Smore newsletters to spread the word online.