A series of 24 addicting cat books by Erin Hunter

A series of 24 addicting cat books by Erin Hunter

In the 24 remarkable books, the Clans of the forest are pushed through challenges, battles, death, and life. Life as a warrior of the four Clans (RiverClan, WindClan, ThunderClan and ShadowClan), is a test of bravery, strength, and pure loyalty to you Clan.

You begin as a newborn kitten, warm and snug in the curve of your mother's belly with your littermates, in the well-protected nursery in the camp. Your mother will name you, for example, Cinderkit, for your cinder-covered fur. From now until the end of your first six moons (months) of life, the last part of your name will be 'kit'. You spend six moons in the nursery with your mother and littemates, dreaming about becoming a warrior one day. After six moons, you are changed from a 'kit' to an apprentice; a warrior in training. You will have a warrior as your mentor, (trainer). The last part of your name will be 'paw', so you will now be known as Cinderpaw. If your destiny is to be a medicine cat, the healer of the Clan, you will be a medicine cat apprentice, and be trained by the current medicine cat to take over their duties when they pass away. When you are fully trained, you will become a full warrior. If you were trained to be a medicine cat, you will be a full medicine cat. The last part of your name, your leader will decide. You could be known as Cinderpelt, or Cindertail, etc. Your leader's last part of his name is 'star' so, Cinderstar, for example.

The leader has a deputy, who will become leader when the old leader runs out of his nine lives. When the deputy becomes leader, he receives nine lives from StarClan. StarClan is where cats' spirits go when they die.

You get the basic idea. If you want to learn more, read the first book in the series: Into the Wild, which introduces the legendary Firestar. Now go read it! GO ON!! 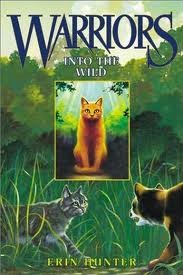 Recommends it for: everyone

This book is about a house cat who is tired of being a house cat and wants to go into the wild. Then he mets a kitten from a 'clan' and goes with him into the forest and mets the rest of the Thunderclan. This book sounds boring, but really, it is a great book. The author is very descriptive and makes it all very interesting. There a four clans, Thunderclan, Windclan, Riverclan and Shadowclan. The whole series, and there are a lot of them, is about the four clans fighting to stay alive and also trying to be friends with the other clans. There are also new series, calld the New Prophecy, they are about different cats and different problems, but all the series join together. It really doesn't sound that great, but you should just try, you will be suprised. This is the first book out of all of them, after you have read it though, you need to read the rest.

Warriors in my opinion was a very good book. The plot of the story was very interesting. Every time that something important or astonishing happen it hooks you more into the book. Its begging is okay but the end was good because it tells you things that you didn’t know. The situations that occur in the story are incredible and you will like them even more if you imagined it. The cat in the story wants to change his life to do adventures things and that is maybe one of the reasons the author writes it, every body can make a change if they put their minds to it. It is hard to remember all the characters and some times to keep track of what are the things that happening but in time you will know them well. The cats respect the rules lay down by the star clan cats. I won’t tell who the star clan cats are because it might ruin some parts of the story. In conclusion this story is very interesting and I highly recommended.

Follow Elise Johnston
Contact Elise Johnston
Embed code is for website/blog and not email. To embed your newsletter in a Mass Notification System, click HERE to see how or reach out to support@smore.com
close