Myriah is using Smore newsletters to spread the word online.

Get email updates from Myriah:

LWO is an Autosomal Recessive disorder that is present in APHA, AQHA, Thoroughbreds and Miniature Horses. It is suggested that this disorder can from the Early American history from the Spanish type horses, and their are a variety of horses in the population that have this mutation in North America. in the 1970's there wasn't a lot known about this disorder, then they called it Congenital Intestinal Aganglionosis. By 1996 major research had been started, and in 1997 University of Minnesota, University of California and a hospital in Australia had all found the cause of LWO. 1998 all findings were made public.

The foals are born after an 11 month gestation and look to be a normal foal. They are all white, with blue eyes, but internally they are non functioning. Most foals will die within 72 hours. They don't develop a functioning intestinal system. The Meconium (first stool) ends up impacted high in intestines and will not appear. They will show signs of colic (stomach ache) and will need to be euthanized. Necropsies show that they have a pale, underdeveloped colon, underdeveloped digestive system, internal obstructions, and lack of nerves that allow the intestines to move the material through the intestines.

LWO effects two physical traits: Pigment and Enteric nerve cells. This suggests that early in the syndrome it was related to an important embryonic tissue (neural crest). Stem cells --> go to nerve cells, and melanocytes --> pigments.

The mutation is in the middle of the endothelia receptor type B (EDNRB) gene when it is homozygous lle ll8 lys (OO). Carriers of the gene Frame Overo's are (nO). It is a TC>AG mutation that changes Isoleucine --> Lysine of the EDNRB protein.

This is a problem because there is no treatment for these horses. Surgery to bypass the intestinal damage was never successful due to the extensive nature of the lesions. There are a lot of myths as to what horses carry the gene. People don't tend to know a whole lot about this disorder unless they are a huge breeder. To the backyard horse owner who wants a foal, most of the time they dont know and they may breed to the wrong stud and end up with a non save able foal. It is also a problem as it is a big money loss. To the people who spend the money to breed to the stud, feed the mare while in gestation and then the vet bills the foal will have. 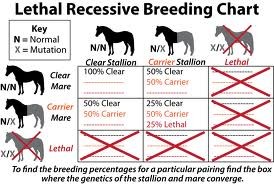 This is a horse that does not carry the LWO gene.

This horse carries one of the genes.

This is a Lethal White Foal, that has both of the LWO genes.

Seeing as this disorder can be prevented, it just needs to be monitored who is breed to who. If you dont breed a carrier to a carrier then you will not end up with this disease. In order to prevent this horses should be tested and then when breeding make sure the owner purchasing the semen knows that they are a carrier. That is all that can be done as you can breed a carrier to a non carrier and get a healthy foal.

My Opinion on Eradication

I think to help with this disorder that when a foal is born it should be tested for LWO and then the outcome should be placed on the papers of that horse, if the horse isn't papered then it needs to be on record at a veterinary hospital, and a copy with the owner. If it isn't the horse should not be able to breed.

Myriah is using Smore newsletters to spread the word online.

Follow Myriah Short
Contact Myriah Short
Embed code is for website/blog and not email. To embed your newsletter in a Mass Notification System, click HERE to see how or reach out to support@smore.com
close