""We also predestine and condition. We decant our babies as socialized humand beings, as Alphas or Epsilons, as future sewage workers or future..." He was going to say "future World controllers," but correcting himself, said Future Directors of Hatcheries," instead."

When the D.H.C. was showing the new children around the hatchery, he stopped them and explained this concept to them. People don't choose their futures in this world, their future is chosen for them, and they are conditioned to work towards and want that future from the time the sperm and egg are put together in a bottle until they become citizens of the World. This is such a dystopian act, because in a way that is perfect, after all, people do what they want to do with their lives. However, it's a terrible thing to do, because you are manipulating people and their brains so that they have no choice but to want what you want them to want. People do this in the real world as well, just not to the extent that it is done in Brave New World. 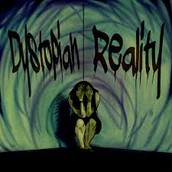 Our World as a Dystopia (Dystopian Paragraphs)

It may be hard to believe, but the world we live in today is in many ways a dystopian society. The way the government controls us is not as painstakingly obvious as it is in Brave New World, rather, it is more of a silent power that alters things just enough so that we go to something else.

For instance, if the government wants us to stop buying peanut butter made in China, they will just raise the price of the peanut butter from China so that we buy the cheaper peanut butter from here in the USA. It's little things like this that show us just how easily swayed we are, even though we tend to think that as Americans we are rock-solid and can stand up to anyone. As Americans, we like to believe that we are free people, that we can live however we like. And in some ways, that is true. If you are born into a lower class, it is possible to work hard and make something out of nothing and move into the upper class. However, underneath that is something we tend to just brush over. Expectations. If someone were born into the upper class, but they don't want to take their parent's place as the head of a corporation, and they instead want to move to the country and live out their life as a farmer because that's what makes them happy, it would be frowned upon. Society would see them as a failure, someone who is incapable of working in society, or that they are simply lazy. This causes people to remain in their class even though they are unhappy, and isn't the point of life to do what makes you happy?

Now, I've just been casually mentioning the class system because it's such a normal part of our lives, and it's so ingrained into us that it seems unimportant. However, the system in itself is a major part of a dystopian society. For example, in Brave New World there is a class system with five major components rather than our three of Upper, Middle, and Lower. They have Alphas, the leaders of society and the most important and free thinking people, the Betas, the second in charge people, the ones that do most of the work that you need to have some intelligence to do, the Gammas, the ones who do jobs that are important but rather mindless, the Deltas, who are too dumb to do anything of REAL importance, but are necessary to society nonetheless, and the Epsilons, the lowest of the low who are virtually brainless and carry out the jobs that no one else would want to do because they're such awful jobs. Now, in our world, people tend to stay within their class because either they don't know how to make money in order to go up a class, or they don't want to be looked down upon by members of their current class. Whether we like it or not, humans in general care what others think of us, so in a way, we control one another.

People like to be accepted by others, and they will do virtually anything to gain that acceptance. That includes sacrificing doing what they love and succumbing to peer pressure and taking corporate jobs if necessary. In doing so, they are being controlled much like the people in dystopian societies are controlled with their lives. The people in Brave New World are programmed, or “conditioned” to do certain things, say certain things, believe certain things, and want certain things whereas we are just are taught by our parents. However, those teachings are what define us. You wouldn’t know right from wrong if your parents hadn’t taught it to you. You wouldn’t have morals, or goals, or religious beliefs if your parents and the people around you hadn’t taught them to you.

In actuality, our world is very similar to that of a dystopia, we just don’t want to believe it because of all the bad things we’ve learned about them over the years of our lives. 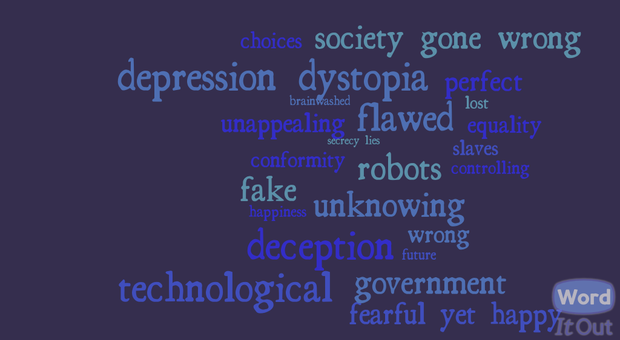 "O, she doth teach the torches to burn bright!

It seems she hangs upon the cheek of night

Beauty too rich for use, for earth too dear"

John (the Savage) says this quote from Romeo and Juliet because he was in his room after having refused to attend Bernard's party, and he was fantasizing about Lenina. Romeo says it when he sees Juliet for the first time at the Capulet party. By repeating Romeo's words, John shows how much he really loves Lenina because when Romeo says it, it's when he falls in love with Juliet at first sight.

Just think: genetically modified. It's genes have been altered, adjusted, changed, warped. It is no longer what it used to be. Genetically modified organisms are nothing to joke about, not when research has proven them to be environmentally dangerous, and possibly even dangerous to us as people. Scientists have proven that by altering the genetics of our crops, we are causing our foods to be come more susceptible to disease and inbreeding within the crops. Now, when plants inbreed, the strongest and the weakest genes are passed along to the offspring instead of the strongest genes outweighing the weaker ones, causing the weak genes to become more prominent. This can cause the plants to become susceptible to diseases, and if one plant catches a disease, it is passed throughout the population. This can virtually eliminate an entire population of a species from an area. Another problem with GMO's is that they can be harmful to our health. Ever since GMO's first began entering our grocery stores, there has been a significant rise in the number of people with food allergies, and with disorders such as autism. Unfortunately, for those who wish to eliminate GMO's from their diet so as to protect themselves just in case, it is virtually impossible. Farmers who use GMO's are not required to label their foods as modified like they are in some countries in Europe. Because of this, more and more GMO's are being used so that farmers don't have to spend more money trying to use pesticides to rid their crops of pests. Instead, they can just alter the genes of their crops to be resistant to the pests, and continuously reuse those same seeds. And as beneficial as that is for farmers economically, it is more harmful to them and their customers health-wise.
Demons - Imagine Dragons

This song relates to Brave New World in quite a few ways. The government of the world is hiding the truth about the past from the people because they want to shelter them and keep them from knowing things such as the writings of Shakespeare that could potentially ruin their 'perfect society'. The "beast inside" reminds me greatly of the D.H.C. because he was inside with the government, but when it was discovered that he made a mistake and impregnated a woman, he went into isolation and was never heard from again. In a way, he was a beast inside the belly of a bigger beast - the government of the world. He couldn't hide what he had done anymore, and so everyone now knows that even the government messes up sometimes. "No matter what we breed" sounds just like Brave New World and the fact that they are designing people and breeding them however they choose to, and yet, "we still are made of greed". You cannot create a perfect person, and eventually certain people want more out of life. They can even become greedy for knowledge. These people are usually sent to islands, like Helmholtz and Bernard are at the end of the book, so that they can have more freedom to expand their minds. This new world for them, these islands, are their "kingdom come."

The Savage - A Dystopian Hero

I believe that if John were to be living in today's world, he would be much more pleased with how society acts than he is with society in Brave New World. We still treat marriage as a respectable thing to do, and encourage people to not have sex until they are married. John was raised with those beliefs, and that was one of the things that hit him the most when he was introduced to this new world. I believe that if he were able to have access to all of the literature that we have access to, he would be one of the happiest men on the planet. If he were to do anything to help our society, I believe that he would do anything and everything he could to eliminate poverty and homelessness because he has such a strong and kind heart, he just wants to help everyone that he possibly can.

Christmas dinner for the less fortunate

Everyone, please come to the soup kitchen and help us prepare and serve a Christmas dinner for those in need! Bring friends to help, and if you have any food you would like to donate to help out, it would be extremely welcome!

Follow Rachel Whitehead
Contact Rachel Whitehead
Embed code is for website/blog and not email. To embed your newsletter in a Mass Notification System, click HERE to see how or reach out to support@smore.com