Family Bible time for the week of May 31-June 6

Family Bible time for the week of May 31-June 6 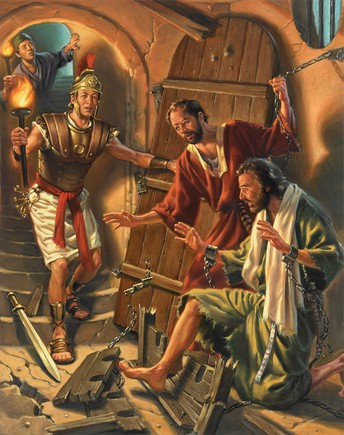 Do you ever sing a song when you're feeling anxious or afraid?

Paul and Silas were sharing the Good News about Jesus in a city called Philippi when some of the people got mad at them, dragged them to the rulers of the city, and lied about them to get them in trouble. Paul and Silas were beaten and thrown into prison. They were put in the inner cell with their hands and feet locked up. What do you think they did? They started praying and singing hymns to God! Then something miraculous happened . . .

Lord Jesus, open our eyes today to see how we, like Paul and Silas, can rejoice in You and proclaim the message of the Gospel. In Your name we pray. Amen.

Paul and Silas healed a slave girl by making a demon come out of her. This made the girl's owners mad. They riled up the crowd, and got Paul and Silas beaten and thrown into prison.

Instead of being sad and feeling sorry for themselves, Paul and Silas prayed and sang songs to God. Suddenly, an earthquake made their chains fall off, and the prison doors flew open!

The jailer thought all the prisoners had escaped, but when Paul and Silas told him they were still all there, the jailer fell down before them and asked what he needed to do to be saved. Paul and Silas said, "Believe in the Lord Jesus, and you will be saved." Then they shared the Good News with the jailer and everyone in his house. The jailer and his whole family were baptized, and they were filled with joy because they had come to believe in Jesus.

Believe in the Lord Jesus, and you will be saved. Acts 16:31

I AM THEY - From the Day (Official Music Video)

Heavenly Father, thank You for filling Paul and Silas with joy in You, even when they suffered in jail for sharing Your Word. Fill us with thankfulness and joy that You have saved us, and help us to share the Good News with others so they can also believe and rejoice. In Jesus' name we pray. Amen.