A Little About Valencia

The Valencian Community is a part of Spain along the east coast, just south of Catalonia, by the Mediterranean Sea. Valencia has become a huge port city, the third largest city in Spain. Valencia’s geographical location, along the sea, inspires seafood in many of their dishes. Valencia is known both for its citrus, as well as rice, causing both to be influential in their cuisine.

Paella is Valencian for ‘Frying Pan’, in which it is served. It is made with rice, chicken, rabbit, tomatoes, saffron, and often duck and snail. Originally a dish for peasants, it has become a very commonly eaten dish for people of every status.

Arroz con Marisco is frequently made for tourists, and called paella, although it had some differences. It is made with seafood, instead of meats such as chicken or rabbit. Arroz Negro (Pictured above) is another common dish, made with squid ink. 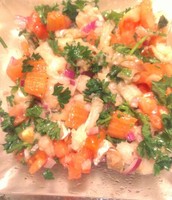 Other traditional foods contain mostly rice and seafood, because of their proximity to the sea, and their ability to produce rice. Traditional foods include, eels in garlic and pepper sauce, sweet red pepper and codfish salad (pictured), and fisherman's stew. Winter dishes include mostly eels, duck, tuna and baked vegetables as well as chorizo and black pudding.