Get email updates from Millie:

Freedom and justice for all Pakistani's

Freedom and justice for all Pakistani's

At 35 Benazir Bhutto was the youngest and first women president of Pakistan.

Benazir Bhutto with her husband and children

Benazir Bhutto was assisnated after addresing a large crowd of suporters. She recieved a gunshot to the neck and the the attacker blew himself up, killing atleast 20 other people.

Benazir Bhutto believed in a modernized Pakistan and a democratic society. She sought to improve human rights for everyone and the position of women in Pakistan. She worked hard to improve living conditions (especially in rural areas), education and health care. She was very passionate about doing something for the people and trying to give them a free country so that they could live peacefully.

Benazir Bhutto believed that "the best way to solve something is by politics." Because her father was a popular politician, many people respected her. After her fathers death, Benazir earned a reputation of her own by opposing against General Zia's regime, which earned her five years in jail. People looked up to her because of her fearlessness. To get her opinion out into the public, she would hold big rallies in which she would speak at and campaign her ideas. Although many people supported Benazir, many people disagreed with her and her non-traditional method. After her first term as Prime minster she was voted out because many of her promises she had made had not been kept, which lost alot of her supporters. Arriving in Pakistan in 2007 after 8 years of living in exile in Dubai, she was greeted by thousands. However a suicide bomber attacked, killing around 130 people although Benazir herself was unharmed. It was said that she was good at drawing people to the idea of her power rather than keeping them inspired by her use of it. 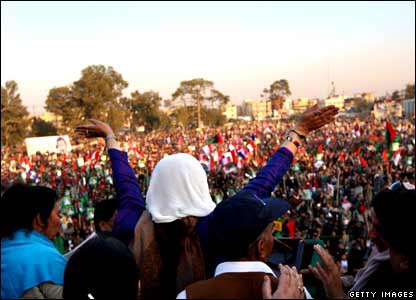 I think that Benazir Bhutto was a very powerful woman who wanted the best for Pakistan. She fought very hard for what she believed in and was good at getting people to follow her. However I think that she was left to clean up the country's crumbling economy and lifestyle and she was also was under a lot of pressure from her opposing political parties. Most of her first term as prime minister was spent defending her party and campaigns.She was slow at getting things done and didn't like to waste time on things.However she quoted that that "I am not one of those leaders who sell lies and buy time. No leader, no dictator could do what I have done." In a male-dominated, Islamic society, Benazir rose up, after her fathers death, to fullfill his role as Prime Minister and fight for Pakistan. She became an iconic figure and was well-known around the world. On December 27 Benazir Bhutto was coming home to Pakistan after being put in exile by the current President General Pervez Musharraf, who's popularity was slipping, as people started demanding Benazir to be allowed back and be Prime Minister. As Benazir held a rally campaigning her new ideas for Prime Minister, she was shot by a suicide attacker who then blew himself up, killing another 20 people and injuring many others. Her death was filled with much sadness because many people believed that she was their last hope for democracy. President General Pervez Musharraf urged people to stay carm but Pakistan broke out in many violent, angry riots. Benazir Bhutto will always be remembered for her fearlessness and strong passion for Pakistan.

Follow Millie Godfery
Contact Millie Godfery
Embed code is for website/blog and not email. To embed your newsletter in a Mass Notification System, click HERE to see how or reach out to support@smore.com
close