April is here and Spring Break is right around the corner. Our students have selected classes for next year, and are either in the midst of their season of sport, preparing for a trip to Carnegie Hall, or getting ready for Robotics World Championships.

Grad Night is a safe, sober, and alcohol-free celebration for our graduates and their last opportunity to be together as a class. Graduates will enjoy an evening of music, casino-style and other games, entertainment, surprises and food. The location is a surprise, but will be revealed to parents by phone message as students are on their way. After graduation, families should plan for their graduates to return to Beckman by 9:30pm to begin boarding busses. Students are required to travel on the bus to and from the Grad Night Party. Buses will return to campus after Grad Night the following morning on Friday, June 16th at 5:30am. Grad Night tickets are available from Mrs. Oberlin at the front desk in the lobby (cash or separate check made payable to Beckman PTO) for $170 until May 1st, $180 until June 1st, and $190 until June 9th (cash only). Please turn your ticket requests (forms located on the PTO website, with Mrs. Oberlin and also in this packet) in to Mrs. Oberlin AT THE FRONT DESK.

Congratualtions to Katrina King who won a scholarship from the 2017 Color It Orange Invitational at Laguna College of Art and Design. The mission of Color it Orange is to encourage artistic expression among high school students and teachers throughout Orange County. Katrina King's artwork, an Information Graphic of Tim Burton, was chosen over several other graphic design projects. She was awarded with a scholarship to attend one of the highly regarded summer sessions.

The Senior Packet has been handed out to all seniors and can be downloaded here. A few changes that need to be noted:

1) Due to class size and stadium capacity, students will receive 5 graduation tickets (no longer 6). A process to pass out additional tickets will be communicated closer to the graduation date.

2) Rehearsal will now take place at BHS instead of THS

Mock Trial combines performance-based, law-related education with tournament-style, academic competition. As a team they analyze the facts of a hypothetical criminal court case, prepare trial strategy and enact every role in the trial proceedings, either as members of the prosecution or defense (8 attorneys, 8 witnesses and a clerk) 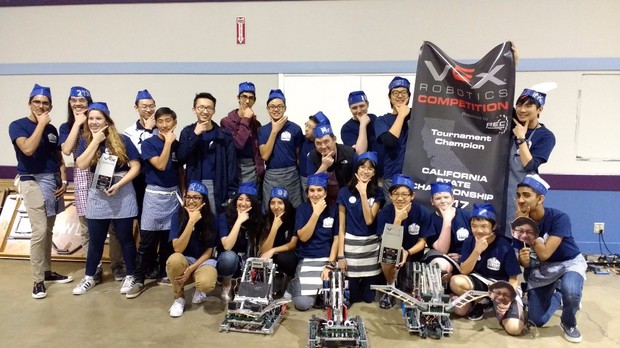 Beckman High School recently sent three teams to the State Robotics tournament in Bakersfield California. This was Beckman’s first time entering a VEX State Competition. Our three teams all placed in the top 10 with our “2496X” team winning the State Title! The judges were so impressed by our teams’ knowledge and documentation of their robots that two teams were asked for follow-up interviews from the judges and our “2496R” team received the judge’s award, qualifying them into the VEX World Competition. Our 2496X made it all the way to the finals where they beat the crowd favorite in a hard fought 3 matches to win the California State Championship, which has been arguably one of the most competitive State Championships in the world! We are now sending two teams to the VEX World Championships in Louisville, Kentucky! 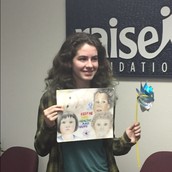 She won first place in an competition held by the Raise Foundation.

The Beckman Debate Team competes for most of the school year; its season runs from September to April each year. All members prepare diligently for each tournament, collaborating in research and sharing debate strategies. Members say they learn not only about debate and current political and economic issues, but that they learn about friendship as well. From the first tournament at Cal State Fullerton, to State Competition, to the national tournament at UC Berkeley, the Beckman Debate Team has seen victories and losses alike…and has always stayed Tru Blu.

"My role as the School Resource Officer is to help provide a safe learning environment for all students and staff. Help educate the students on dangers of drugs/alcohol and the dangers of criminal activity. Provide assistance with counseling on mental health and/or making positive decisions. Enforcing criminal activity and utilizing the criminal diversion program. All while providing a positive role model for the students."

Why is there an increase in substitute teachers?

Over the last year or two, schools have seen an increase in the number of subs needed to cover teachers for extended leaves. Here is why: Assembly Bill 375 (AB 375), effective January 1, 2016, added Education Code 44977.5, which provided certificated employees (teachers) with up to 12 weeks of leave for parental leave. An additional bill AB 2393 went into effect on January 2, 2017 which amended Education Code 44977.5 and expanded the definitions for parental leave. These two bills now allow employees to be compensated for up to 12 weeks of parental leave for the purposes of “baby-bonding,” which was previously provided under the California Family Rights Act (CFRA) as unpaid leave.

The Senior Scholarship Dinner is an invitation only celebration event for seniors who have been awarded a scholarship for $500 or more from a community organization or the college/university they will be attending in Fall 2017. Seniors being recognized at the dinner will receive an invitation for themselves and two guests. Students must sign into their mytusd account and complete and submit the Senior Scholarship Form on/before May 1st in order to determine if they will be included in this event. The link for the form is below

The Ed Fund is busy preparing for our upcoming Spring Fundraiser and are looking forward to celebrating Beckman’s diverse population! Please save the date, Friday, May 12th, for the “Passport to Diversity” silent auction fundraiser. Spend an evening under the stars mingling with parents, teachers and Beckman administrators, watching our student groups perform, having dinner, and donating to your student’s academic experience at Beckman! Be on the lookout for your invitation soon. For more information, or to donate an item to the auction, please contact Beckman Ed Fund at beckmanedfund@gmail.com.
Get Directions

Follow Donnie Rafter
Contact Donnie Rafter
Embed code is for website/blog and not email. To embed your newsletter in a Mass Notification System, click HERE to see how or reach out to support@smore.com
close