I hope that you are having a great start to the week. I noticed the leaves on the trees beginning to change colors and the air is rather crisp at night. Fall is certainly on our doorsteps. It's truly my favorite season.

As you know, we have been implementing our COVID testing procedures. For the past two weeks, we have had 1 staff COVID case found in our testing program. We currently have two PK student COVID cases. As a result of the data, we will be dropping our Middle and High School COVID testing percentage down from all unvaccinated eligible students to 15% for this week's testing program. We will continue to test 5% of the K-6 population and all of our unvaccinated staff members. I will report out this week's test results as soon as the data becomes available. My hope is that our numbers will stay low and that we can shift our entire student testing program to a randomized 5% pool.

This Sunday, October 3rd, Chartwells Food Service will be conducting a simulated lunch experience for all parents and guardians of PK-5 students in each of our elementary schools. Off site preschool locations have been given an elementary school to go to for this simulation. Be sure to fill out the RSVP when you receive the invite from your school's principal or PK provider.

I have had a few parents ask about dates for our school plays, district musical and concerts. As you know, last year we did everything via a remote platform. This year, we will watch the data closely in order to determine if we are able to host these performances in a live venue. In the meantime, the dates are as follows:

Our Family Math Night is back and will be better than ever. Please join us on Tuesday, October 19th from 6:30 p.m. to 8:30 p.m. on the High School Football Field for a fun-filled evening of math games and activities, informational sessions and dinner!

In closing, I want to thank all of you for your cooperation, patience and partnership. All three ingredients make for an incredible school district. I could not ask for a more committed collection of guardians and parents. You are truly amazing and I am honored to serve the Hoboken Public School District.

It is no secret that STEM (science, technology, engineering and math) professionals are essential to success in the 21st century – the success of individuals. communities and nations. Hoboken Middle School is investing in a ground-breaking, physics-education program that will produce a pipeline of science-savvy students, teachers and future professionals. And, in a bold move to give their students the ability to compete successfully in the 21st century, they are the first school district in New Jersey to start physics education in middle school.

This fall, the Hoboken Public School District will begin using a pioneering program called Physics in a Box TM to bring 6th, 7th and 8th graders the kind of physics education that is commonplace in Europe and Asia. The program, which was developed by international experts in physics and education through a company called Physcira (Physical Science Research Associates), is used in more than 100 schools and districts nationwide. It provides everything needed to give students hands-on experience with physics concepts and provides year-round, weekly training for teachers. In the process, it injects fun into a subject that is often considered scary.

“Our goal is to place applied mathematics in the hands of students, as we know that students learn best by doing,” said Dr. Christine Johnson, superintendent of the Hoboken Public School District. “With leadership from Middle School Principal Anna Marra; Dr. Robin Baskinger, supervisor of Programs and Instruction; and participating science and math teachers, we are proud to take our science-education efforts to the highest international level.”

That means that Hoboken Middle School students will be taught physics as a separate discipline, which is rare in the United States. Three times per week, they will conduct experiments in fields such as mechanics, optics, and electricity and magnetism; see physics concepts come to life as they work on projects such as designing and building functioning microscopes, cameras, telescopes and radios; and they will see the connection between science, math and nature.

All this goes above and beyond current academic practice in the state and nation, but is mandatory in most European and Asian middle and high schools. “Hoboken Schools have made a courageous and far-reaching decision in adopting the highest standards in physics education,” said Dr. Anatoliy Glushchenko, professor of physics at the University of Colorado – Colorado Springs and Physcira founder. 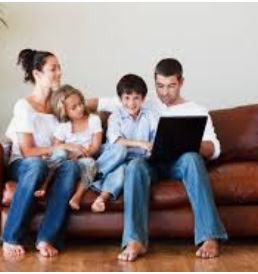 If you have any questions regarding your child's school or schedule, please reach out to his or her principal via email. Our principals' email addresses are as follows:

If you have any questions regarding Early Childhood Learning, please contact any of the following:

All curricular program questions should be address to:

Any questions regarding the Elementary Schools or Middle School Passport to Learning Progrm should be sent to:

This school year, we are asking all parents and guardians at all school levels to regularly use our student information system (Genesis). If you do not have a Genesis Parent Portal Account for your child or each child in your home, please contact your the appropriate school clerk to assist you: 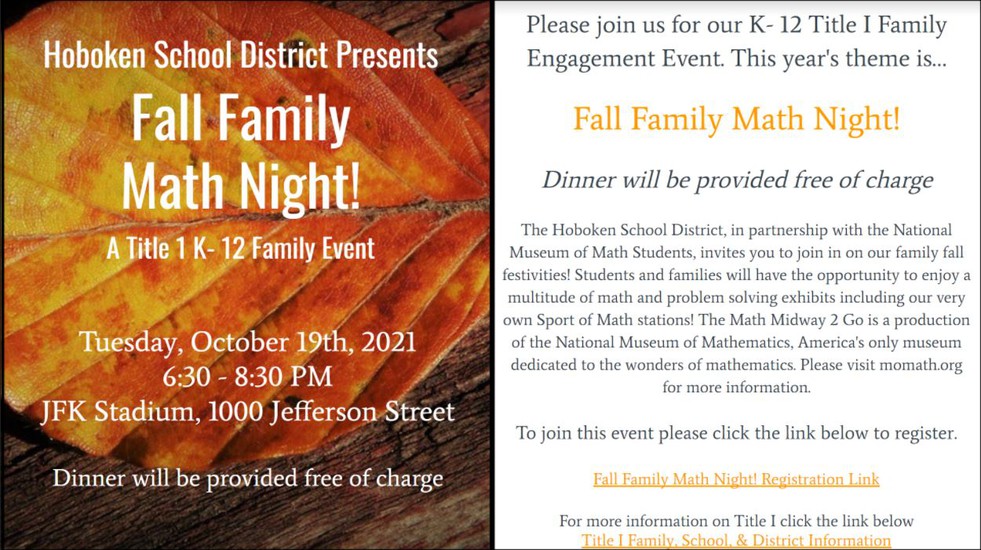 The following winners will be honored at halftime of the Hoboken High School v. Madison High School Varsity Football Game on Friday, October 1st at 7:00 p.m.

All Around Winner - Fifi Dellara

All Around Winner - Samayah Blanks 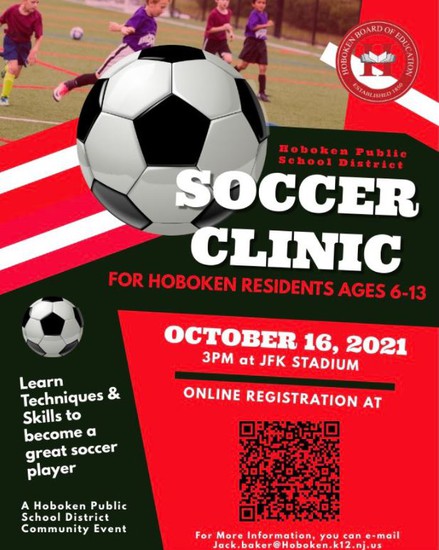 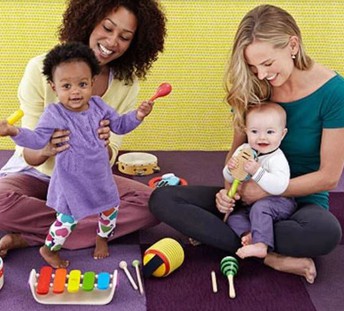 Wee Passport is Back

Wee Passport is a program designed by the Hoboken Public School District for the 2021-2022 school year. Wee Passport was developed collaboratively two years ago by the Departments of Innovative Programs and Early Childhood Education.

This year, all of our Wee Passport Programs will be held at the High School Football Stadium (1000 Jefferson Street, Hoboken).

If you live in town and know of any family that may be interested in this program, please find all of the pertinent information below: 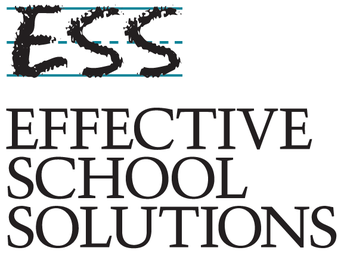 Mental health has emerged as a top priority for all schools and districts, especially since the beginning of the COVID-19 pandemic. Like districts across the country, Hoboken Middle School knows that there are mental health challenges due to the crisis. “Now more than ever, mental health is critical component of student success and we need to do everything we can to ensure our students are receiving the help they require in order to succeed. ESS can help us achieve this goal.”

The ESS program will provide intensive support for students with mental health challenges. Many of the students that ESS aims to serve may otherwise be at risk of placement into a private school outside the district. The ESS program will enable these students to remain in District and benefit from all of the resources the school has to offer.

Duncan Young, CEO of ESS, stated “It’s vital that districts support the mental health of every student. Hoboken Middle School and the District share our vision and we believe we have a moral obligation to address the mental health epidemic, which was compounded by the COVID-19 pandemic, because all students deserve to reach their full potential.”

The partnership between Effective School Solutions and Hoboken Middle School began on September 1, 2020 and continues to grow stronger.

Since 2009, Effective School Solutions has been a leader in school based mental health. ESS partners with over 100 schools in over 60 districts in New Jersey, Connecticut, Pennsylvania, New Hampshire, Rhode Island and California to provide comprehensive, cost-effective whole-school clinical programs to K-12 students. 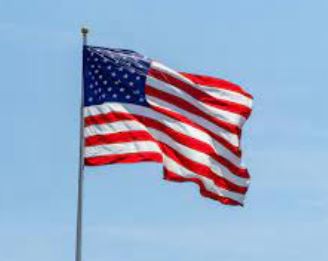 In honor of Veterans Day, you are invited to participate in a special program to honor our heroes. The front of our beautiful John F. Kennedy Stadium will be decorated with American Flags. Please see information below: 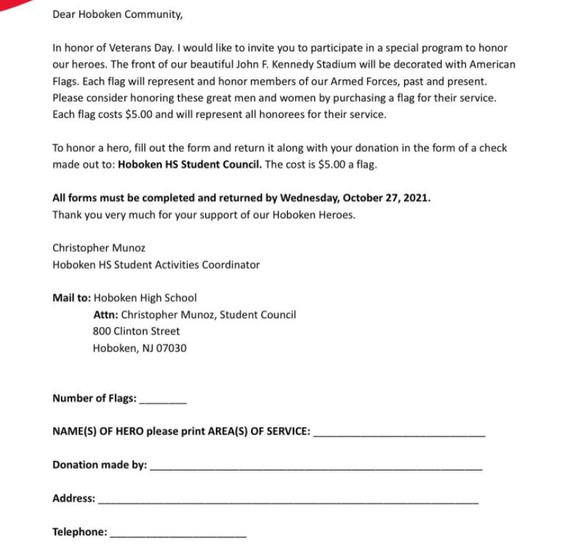 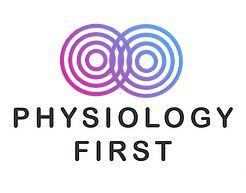 Physiology First is a nonprofit organization that shares leading edge tools to mitigate stress and anxiety and peak cognitive performance with students, parents, and educational leaders. This year Physiology First and the Hoboken Public School District have teamed up to deliver monthly professional development series for staff members, titled The Art and Science of Learning. During these monthly PD sessions CoFounders David Bidler and Lex Clark, alongside special guests from Physiology First's Board will deliver cutting edge science, provide practical tools, and take a deep dive into the new science of how we learn and how to optimize student performance. Hoboken Public School District's partnership with Physiology First will best prepare the next generation of teachers to deliver lessons and learning to our students using a data driven, scientific, 21st century physiological lens! 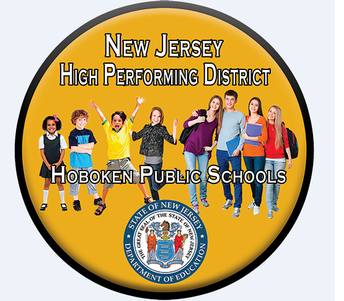 The Hoboken Public School District will be recognized as a premier educational choice and widely known as a best-practice model for academic growth, high quality instruction, innovative and equitable programs, engagement, facilities and personalized pathways that are essential for college, career and life-preparedness in our ever-changing, interconnected global society.

The Hoboken Public School District will implement a rigorous, relevant and responsive curriculum that meets the needs of all students, fosters personalized pathways for learning, and ensures continuous academic growth.

The Hoboken Public School District will support its diverse staff in professional growth, encourage them to serve as role models, and empower them to provide the highest quality of instruction for our students.

The Hoboken Public School District will develop and implement unique and innovative programs that promote global learning, ensure equitable access, and foster the social, emotional and academic growth of each student.

The Hoboken Public School District will engage and communicate with families and the wider community to bridge understanding and advance partnerships.

The Hoboken Public School District will operate well-maintained and safe facilities that respond to our growing student enrollment, support our academic and co-curricular programs, and promote pride across the city.

Follow Christine Johnson
Contact Christine Johnson
Embed code is for website/blog and not email. To embed your newsletter in a Mass Notification System, click HERE to see how or reach out to support@smore.com
close