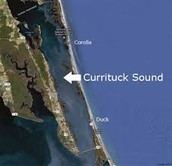 Currituck Sound is an estuary along the East Coast of North Carolina. It offers ample access to wide open spaces of shallow open water. It is also dense thickets of maritime forest and has marshy islands that are covered in wildlife. It plays an important part of the environment because one, it provides good quality habitats for many different birds and other wildlife. Second reason is because it gives high quality water that benefits not just animals, but also the people in that region. We need to take care of it so we can help protect important bird areas. A third reason is because it helps reduce flooding and helps control erosion.

There are quite a few plants in the Currituck Sound. A couple are live oak, loblolly pine, black needle rush, cattails, and shrub thickets. There is also giant cordgrass.

There are many wading birds in the area and Loggerhead sea turtles which lay eggs there often. There is also many different types of fish such as sea trout.

Water that flows into the Sound

Threats to this Estuary

There is one major threat to this sound. It is the sea level rising. According to the Science Panel report, they say that the water could rise as much as 11 inches over a time period of 30 years. The next century, the water could rise over 3 feet. Barrier islands could start breaking apart and the ocean and it's storms would move into the sounds. Also the website states that in northeastern North Carolina, land is sinking. A bad thing about that is not that we are just losing land, but also they get bigger waves in the North. Waves are pretty strong and powerful, especially the bigger ones which don't help in this case. They dislodge sand and slam against protective dunes.