Born January 27, 1978 he's been competing since 1998. He finished in 26th place of the winter Olympics in Turin. Four years later in Vancouver he finished sixth place in the Men's double event.

Since appearing in the 2010 Oympics Niccum has had a pretty rough patch, going through back surgery, rupturing his Achilles, and suffering multiple illnesses. And the scariest of all the premature birth of his third child Emmajo born six weeks early. The Seattle-times states "For anyone else, a once-in-a-lifetime bad patch. For Niccum, it’s just another Olympic quadrennial in a career of struggles, physical and financial, to keep alive a longshot dream of an Olympic medal."

Christian Niccum has More than 20 years of luge on his resume, and he is seriously debating if this year will be his last.

Niccum left Seattle on Jan. 1 to compete at the World Cup. Since then, he has been to Latvia, France, Germany, Austria and now to the Black Sea coast of Russia. 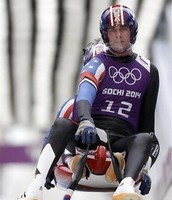 Niccum, 36, spoke about his retirement plans after finishing 11th with Jayson Terdiman in the doubles competition Wednesday at the Sanki Sliding Center. As the top-finishing American pair, they earned a spot on the U.S. team that will compete in the luge relay's Olympic debut Thursday.

Growing up in Woodinville, Washington, Niccum followed his older brothers into skateboarding, wakeboarding and BMX. At 12, he took his first simulated luge runs on a hill in downtown Seattle and immediately was hooked. He went on to win four consecutive Junior World Champion titles in doubles.