John Wayne Gacy was born on March 17th, 1942. His father, John Stanley Gacy was an abusive alcoholic and often beat John for no reason, while is mother did little to protect against his rages. He struggled keeping a healthy relationship with his family, especially his father. During his childhood he was sexually molested from a close family friend. Throughout his teen years, Gacy struggled with his sexuality and his heart condition. This illness caused him to become overweight and often dealt with bullying. Although, school was hard for him, he graduated from Northwestern Business College in 1963.

Gacy became a public figure in his Chicago suburb with his contracting business and his political ideas. He organized many cultural events and dressed up as "pogo" the clown to entertain at children's parties. During this time he married his first wife and had two kids. He later, was convicted in 1968 for two different accounts of sexual assault to teenage boys and sentenced to 10 years at the Anamosa State Penitentiary, because of his good behavior and rule following he left after 18 months on parole. While in Anamosa, his wife filed for divorce.

In prison, Gacy painted pictures of pogo the clown and sold them. Many ranged from $200 to $20,000 and only 19 were sold. Some were sold to be burned in a huge gathering, where families of his victims attended.

This is his last meal that consists of :

A pound of strawberries

John worked at KFC for many years and became manager over 3 different restaurants.

He went back to Chicago to rebuild his life and married his second wife. His wife and the community did not know about his past mischief. Him and his wife were very successful until Gacy confessed that he was bisexual. They divorced in 1976. He fell into his old habits during this time and lured young boys by offering them a potential job at his contracting company. After a few years of doing this, rumors started to surface and many people were concerned. In late 1978 a boy Robert Piest disappeared and told his mother he was talking to John Wayne Gacy about a potential job. Police received a search warrant and discovered the many victims and evidence of the killings. Most of his victims were buried under the crawl space of his house and some were found in the Illinois River. Gacy often dressed as his alter ego "pogo" to do his killings where would strangle the young teenage boys. His killings began in 1972 and lasted till 1978.

The trials began in February of 1980, where John Gacy confessed to the crimes and told police and officials that the killings were committed by his alternate personality "Pogo the Clown". Although he was found guilty, the argument was whether he was sane while committing the crimes. He testified that he was insane and irrational at the times of the murders. The verdict was guilty but sane. John was sentenced to serve 12 death sentences and 21 natural life sentences. After a decade and a half, he was killed my lethal injection on May 10th 1994.

After his death in May by lethal injection, his brain was sent to researchers and examined to find there was no abnormalities with Gacy's brain.

The killer of 33 teenage boys was killed by lethal injection in May. His famous last words are "Kiss my A**"

Many people think that John Wayne Gacy raped, killed, and tortured young boys because he was ashamed of his sexuality. Another reason good be the mistrust and hurt from his father in his past and later took it out through his crimes. There were no warning signs of his awful crimes, many people were suspicious, but became John was successful and well-known in his city, people did not see through his double life.

I believed that because of his past abuse and becoming an outcast early in his life helped triggered the crimes. The struggle with sexuality, marriages, and his heart conditions also had factors into him become his killing, self hating pogo the clown.

1. John Wayne Gacy's success. because of this he easily led his victims to his home to discuss potential job offers. This made it easy for him to find and lure the innocent teenagers.

2. Past. The abuse from his father and becoming an outcast early on. The difficulty with his marriages and heart condition helped trigger an emotional life, where he was always trying to get back at someone.

3. Early molestation. In his childhood he was molested by a family friend. This may have led to different emotional problems and the reason for his raping and killings of young boys because something similar happening to him as a boy.

4. Sexuality. Gacy was conflicted over his sexual orientation his whole life, this might of led to the reasoning behind the types of victims he looked for. Teenage boys were wanted he wanted in his victims and was easy for him to lure in. 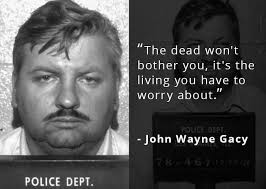