I have created a "Smore" (online newsletter) for each unit in our course. I hope that you will find these resources helpful!

I have included some video lectures I found for you. There are some good ones and I didn't see a need to "recreate the wheel!"
AP Comparative Government and Politics

Vocabulary is very important to your learning.

How can you expect to understand what you read if you don't have knowledge of the terms?

2. Collective Identities: the groups with which people identify, including gender, race, class, region and religion which are the 'building blocks' for social and political action

3. Comparative Politics: the field within political science that focuses on domestic politics and analyzes patterns of similarity and difference among countries

4. Globalization: the intensification of worldwide interconnectedness associated with the increased speed and magnitude of cross-border flows of trade, investment and finance and processes of migration, cultural diffusion and communication

5. Country: a territorial unit controlled by a single state

6. State: the most powerful political institutions in a country, including the executive, legislative and judicial branches of government, the police & armed forces; the organization that maintains a monopoly of violence over a territory

7. Legitimacy: a belief by powerful groups & the broad citizenry that a state exercises rightful authority

8. Dictatorships: a form of government in which power & political control are concentrated in 1 or a few rulers who have concentrated & nearly absolute power

9. Democratic Transition: the process of a state moving from an authoritarian to a democratic political system

10: Politics: the "struggles in any group for power that will give one or more persons the ability to make decisions for the larger group"

11. Power: the ability to influence others or impose one's will on them

12. Comparative Politics: a subfield that compares the pursuit of power across countries

13. Sovereignty: the ability to carry out & policies within a territory independent of external actors & internal rivals

15. Government: the leadership that runs the state

What IS Comparative Government & Politics Anyway?

However, in an increasingly globalized society domestic and international politics often overlaps and the boundaries are blurred.

Political activity occurs within a nation's borders and comparisons of domestic politics, institutions and processes help us understand important features that are specific to one country over another country's.

While a key facet of globalization is international economic competition and integration (and that is increasing,) countries are still the basic building blocks in structuring most political activity.

The comparative approach basically analyzes commonalities and differences among nations by focusing on specific political institutions and processes.

There are different types of legitimacy including:

1. Traditional Legitimacy is based on historical myths & legends as well as the continuity between past & present. For the public, change is difficult to imagine if an institution has existed for as long as anyone can remember.

2. Charismatic Legitimacy is based on the power of ideas & beliefs. Charisma is typically embodied by people who can persuade the public through ideas and the manner in which they present them.

3. Rational-Legal Legitimacy is based on a system of laws and procedures that are presumed to be neutral or rational.

Below is a graphic with examples of people who operate under different types of legitimacy. 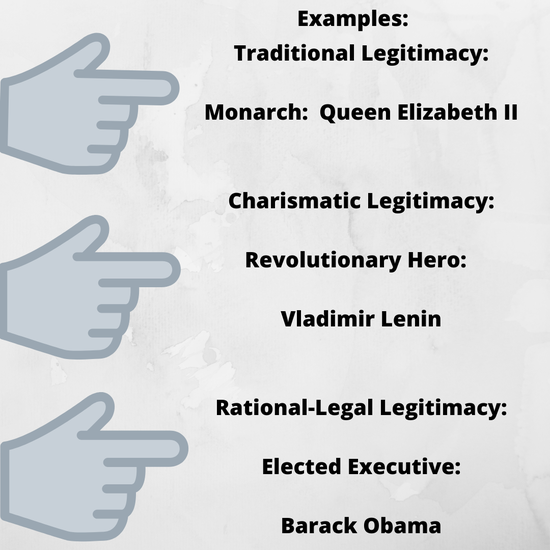 1. Federalism: a system of government in which powers like taxation, lawmaking & security are devolved to regional bodies (ex. states, provinces) & to local legislatures that control specific territories within the country (ex. Germany, United States, India)

3. Unitary States: a state with political power concentrated at the national level & local authority is limited; the central government is responsible for most policy (ex. China, Japan, France)

4. Devolution: the tendency toward decentralization; a way to increase state legitimacy by moving power closer to the people; sometimes used to resolve ethnic or religious differences by giving greater local powers to regions where they are predominant

5. Capacity: the ability of a state to wield power in order to carry out basic tasks of providing security, reconciling freedom & equality

6. Autonomy: the ability of the state to wield its power independently of public or international actors, closely related to sovereignty 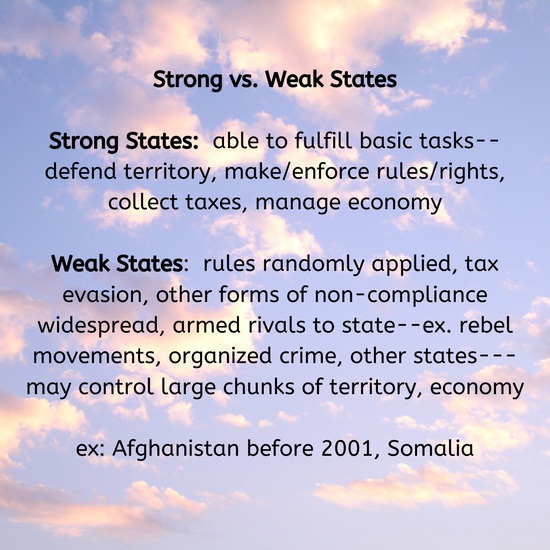