Family Bible time for the week of July 26-August 1

Family Bible time for the week of July 26-August 1 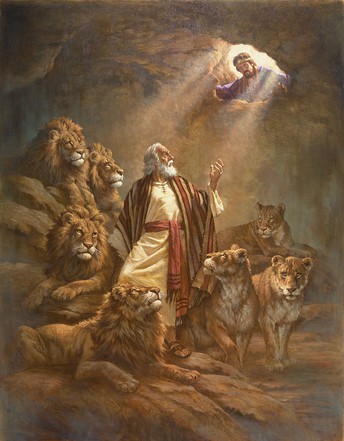 Daniel in the Lions' Den

Daniel was one of the Israelite young men who was brought into exile in Babylon when Nebuchadnezzar conquered Jerusalem. You may remember his friends Shadrach, Meshach, and Abednego, whom God saved from the fiery furnace. God made Daniel very wise, and the king gave him a position of power in Babylon. Later, a new king, Darius, also saw Daniel’s wisdom and set him above all the other advisors. Those advisors were so jealous of Daniel that they plotted to kill him. But they couldn’t find anything to pin on Daniel. So they hatched a plan. Knowing Daniel’s loyalty to God, they tricked Darius into making a law: bow down to him only or be thrown into a den of lions. Then they sat back to see what would happen.

Heavenly Father, You have rescued us from all harm and danger. Thank You for sending Your Son Jesus to face Satan, the roaring lion, and defeat death for us. In His name we pray. Amen.

Daniel in the Lions' Den

King Darius had made Daniel ruler over the whole land. The other officials were jealous of Daniel. They wanted the power and glory instead of him.

The officials tricked King Darius into making a law that everyone should pray to him and not to any other god for a month. Daniel served and obeyed the one true God only, so he kept praying to God as he always had.

Daniel was thrown into the lions' den and a large stone was put over the opening. When King Darius came the next morning to see what had happened, he found that Daniel was still alive! God had rescued Daniel by shutting the lions' mouths. Then Darius had Daniel brought out, and the wicked officials were thrown into the den. Then King Darius said that everyone in his kingdom must reverence the God of Daniel, because He is the God who rescues and saves.

God has rescued you from the punishment of your sins through Jesus' death and resurrection!

I Will Not Be Afraid | Roar VBS | Group Publishing

Psalm 7, In You I Take Refuge (a new musical setting)

Dear Lord, thank You for protecting us and delivering us from evil. You rescued us from sin by sending Your Son, Jesus. Just as Daniel was a witness to others in his community, help us to share Your Gospel message with others in our community. In Your name we pray. Amen.