Feminism Literary Theory & My Response to The Great Gatsby

Feminism Literary Theory & My Response to The Great Gatsby

Feminism is a controversial topic in conversations but also within the book “The Great Gatsby” by F. Scott Fitzgerald. This book has many scenes within it that talk about feminism & how they view women and men roles during the 1920s. This text examines the oppressive forces of patriarchy and this is accomplished through the character’s development and the way they view each other as people.

I would connect Daisy, Tom, & Gatsby. I would focus on the event of Gatsby forcing Daisy to say she loves him when in reality she doesn’t. This connects, because it shows how men treat Daisy through the decisions and through how everything is played out. Chapter 7, Page 132, states, “Daisy, that’s all over now. It doesn’t matter anymore. Just tell him the truth-that you never loved him-and it’s wiped out forever.” This quote connects back to the question and how it relates to the overall topic.

Another part when Daisy was forced to admit something that wasn’t true, was in Chapter 7, Page 134, it states, “She hesitated. Her eyes fell on Jordan and me with a sort of appeal, as though she realized at last what she was doing-and though she had never, all along, intended, to do anything at all. But it was done now. It was too late.” This quote connects back to the questions and how it relates back to the topic of feminism. It also relates back to how the form of patriarchy is portrayed here.

Daisy is put in situations where she doesn’t know what to do when Tom & Gatsby force her to admit something. Another quote from Chapter 7, Page 134, is “It passed, and he began to talk excitedly to Daisy, denying everything, defending his name against accusations that had not been made. But with every word she was drawing further and further into herself, so he gave up, and only the dead dream fought on as the afternoon slipped away, trying to touch what was no longer tangible, struggling unhappily, despairingly, toward that lost voice in the room.” This quote shows how patriarchy and feminism are shown through this quote.

In conclusion, these quotes are showing how patriarchy and feminism are portrayed through this book & how men and women’s role is shown as well. 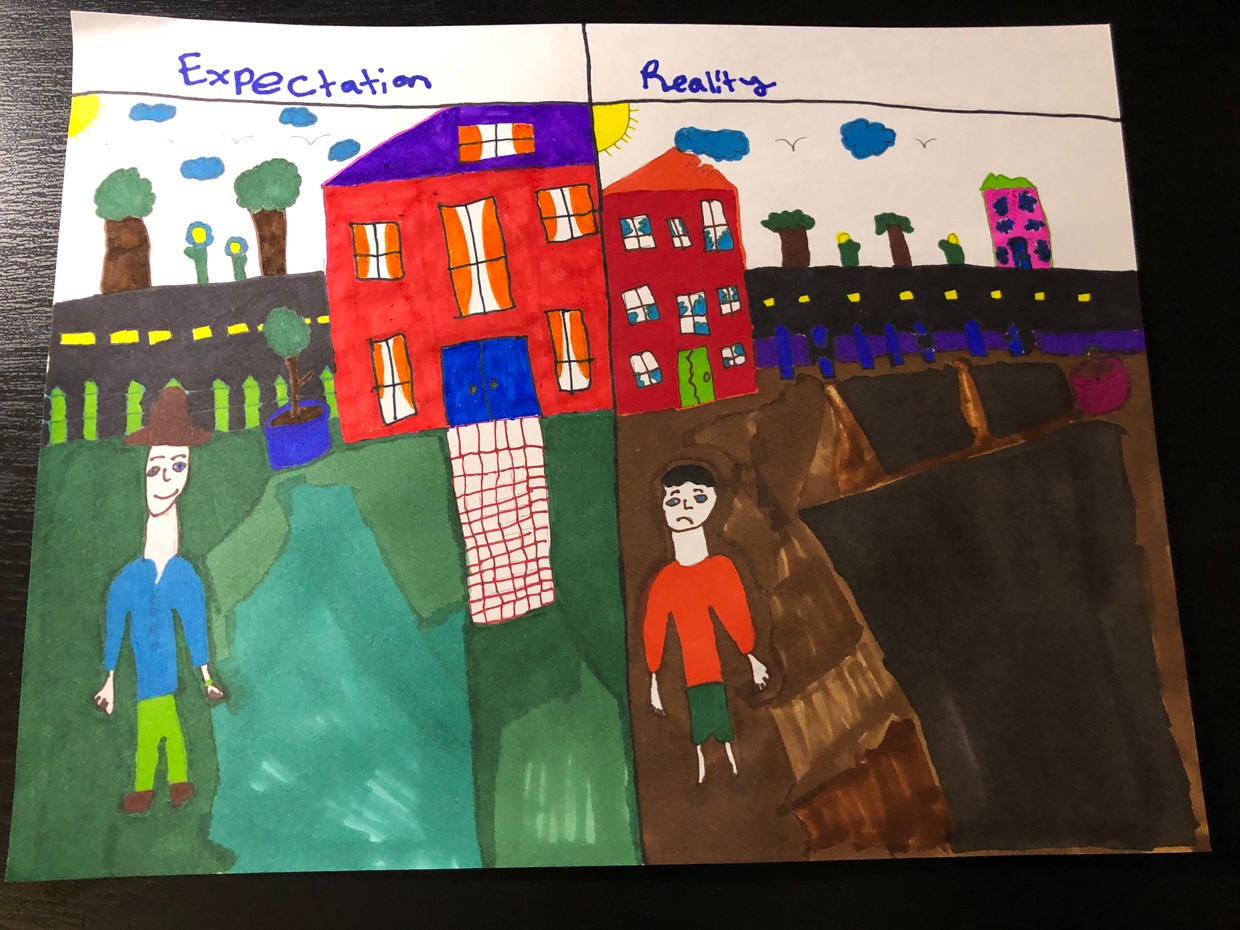 I drew this picture, of Expectation vs. Reality because it shows how in the Great Gatsby the rich prosper and live in places that are better compared to those who are poor and don't live in places with wealth or the ability to plant. This picture accurately represents the time in which they were living. Through this, the reader is able to see how two different classes have statuses that can make or break their lives.

Tom is the type of person who I absolutely hate. My cousin Daisy, doesn’t deserve any bit of what Tom does. He dragged me along to meet his “girl”, this “girl” of his is childish and nowhere near as beautiful as Daisy is. To me, I find this very concerning mostly because Daisy has told me many times that she absolutely loves Tom. I decided against saying anything, because Tom is a scary person to be around. Later, he dragged us back to a different home from him and Daisy’s. We threw a childish, chaotic party with a few other people I didn’t know at all. I didn’t quite enjoy it at all, but I put up with it for him. I spent some time wandering around and thinking to myself about what happened that day. When I came back, the living room was empty and way too quiet for my liking. I tried looking around for the others, but I didn’t see them.

Later, the next day I notice my neighbor Jay Gatsby is throwing a party at his elaborate mansion. Curious, I attended the party and am surprised to find it is less chaotic than yesterday. This makes me confused, because I normally thought rich folks like him throw lavish parties and stay out past midnight. But, for him he didn’t do either. I mean, everyone was dressed up but it wasn’t the same as yesterday. I wonder if he’s the type of man who feels as though he doesn’t need to prove anything to anyone because he has it all figured out. He has everything everybody wants to own and hold in their hands. Wanting to find out more about him, I talk with him for a while about his life and what he likes about New York. He surprises me with knowing far more than I previously thought he would.

After the party, I go home and lay down on my bed thinking about the day’s events. I debate as to whether or not I should tell Daisy that Tom is having an affair. I know how much she loves her current life, and I don’t want to see her upset but I am not sure she would believe me anyways. I decide against it, and start drifting off to sleep as my mind races with thoughts of tomorrow and whether or not Jay Gatsby is truly as great as he seems.

The part of the book this is based on Nick noticing Jay Gatsby threw a party at his house. Tom was treating Daisy in a way that made Nick very upset and he didn't like it at all. During this part in the book, Nick realizes Gatsby has everything anyone would want to own during their life.

Hey, it’s Nick again. I have more to say from last time about Gatsby, but here's the catch: Daisy is also in this entry. Yes, my cousin Daisy. Today, both of them were over at my house and they were in the same room together. But this caused a weird tension between them and me. I don’t know what happened between them but I do know this. It is the worst kind of tension one has ever felt in one’s entire life. I am probably making this a bigger deal than it needs to be, but I couldn’t grasp what happened or even what was going on.

I am not one for drama nor tension, so I felt very weird. Gatsby kept giving Daisy a cruel look & my cousin looked as if she was on the verge of tears. It hurts me to see my friend being so mean to my cousin. I pulled him aside and asked if anything was wrong, but he stormed off into the freezing cold rain telling me: “It is nothing.”

From that point on I wish I could say things between them got resolved, but unfortunately they didn’t. My keenness for partying came in handy when my friend suggested we all go to a party that day. I agreed, hoping it would relieve the tension but Tom joined us. I never quite liked Tom, he’s the type of guy who feels as though he's always right. I have a fondness for losing myself in the fun of life. Honestly, of all the parties I have been to in my time, this one was my least favorite one. The chaoticness of it, but also the lack of the people with me & surrounding me being unaware of the length at which they were partying.

Later, when I got home I was too exhausted to bathe so I changed my clothes and got into bed. During this time I was contemplating everything that went on that day and how I feel as though Gatsby is hiding something. It makes me wonder if I can fully trust him or if I need to be wary of him. I will figure that out tomorrow. For now, it is awfully late & I need to be well rested for tomorrow’s crazy events.

The part of this book this is based on is when Gatsby comes over to Nick's house and Gatsby & Daisy get into an argument causing them to have tension. This makes Nick feel awkward and doesn't know how to fully undo the tension. He later writes in his journal about this feelings towards this situation and other situations as well.