Kaylei is using Smore newsletters to spread the word online.

Get email updates from Kaylei:

Are earthquakes weather related,geologic in nature and/or caused by humans? You may have more than one answer.

its is weather related and geologic in nature

What are main features of earthquakes, how does it form

Earthquakes are sudden rolling or shaking events caused by movement under the Earth's surface.

Where and when is earthquakes most likely to occur?

List positive and negative impacts this disaster has on the ecosystem?

Thousands of small earthquakes occur almost all the time; however, most of these occurrences are too weak to be felt by humans. On average, a major earthquake occurs once per year. A major earthquake is one of the most devastating natural disasters; it can level cities within seconds and can even cause great tsunamis if it occurs under the ocean. Although earthquakes are generally destructive to humans, it is a natural process that our planet has to undergo in order to release pressures that build up beneath its surface. 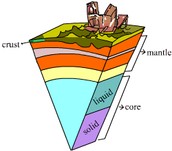 Does the disaster change the surface of the land?

Kaylei is using Smore newsletters to spread the word online.

Follow Kaylei Green
Contact Kaylei Green
Embed code is for website/blog and not email. To embed your newsletter in a Mass Notification System, click HERE to see how or reach out to support@smore.com
close