1. Eye wall: A ring of towering thunderstorms, where the most severe weather occurs.

Sentence: There are special planes that drop a falling probe into the eye of a hurricane, to scan the eye wall and see how strong the storm is.

2. Dropsonde: A canister that is released into the eye of a hurricane that measures wind, temperature, pressure, and humidity.

3. Anemometer: This is a wind gauge used for recording the speed and often the direction of the use.

Sentence: Weather an instrument called an Anemometer to tell us how fast the wind is blowing.

While I was researching I found out that Hurricanes and Typhoons are very big storms that are called extreme weather systems. Both a hurricane and a typhoon occur over the warmest part of the ocean. Hurricanes form over the Atlantic Ocean. And Typhoons form over the West Pacific Ocean. Both storms start as warm water that evaporates and forms clouds. Once the clouds organize and start to spin, the wind increases. As soon as the wind exceeds 74 miles an hour, the storm is classified as a Hurricane or Typhoon. These powerful winds do a lot of damage and can tear trees and houses apart. That is what I learned while researching.

While I was researching extreme weather, I came along Hurricanes and that reminded me of Hurricane Sandy. Sandy was a category 3 Hurricane, 111-130 mile an hour winds, that hit the United States in late July 2012. This storm was devastating to thousands of people. In New Jersey, it destroyed homes, stores, and the beaches. People were without shelter, power, and had minimal food and water. I felt so bad for the people of New Jersey. We lost power for only a couple of days, but it was so sad for them because they were suffering for weeks. Hurricane Sandy left. It took months to clean up the mess and get people back into their homes. They are strong people though, because they worked hard and cleaned up the mess by themselves. That is the connection I made while researching Hurricanes. 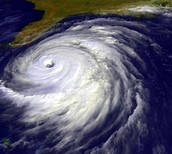