On March 5, 1770 British soldiers opened fire on a few of the colonists who were protesting in front of a tax house. The colonists said they were being peaceful and British opened fire, the British say that the colonists were throwing things and attacking so they fired back to protect them selves. Either way five colonists were killed. This angered the colonists but also strengthened them because this inspired them to take arms and form militias.

The British parliament were levying taxes on the colonies. This is not the main reason the colonists were angered, it was the fact they had nobody to represent them in parliament so they couldn't vote for or have a say in the taxes being created. They said that they would pay the taxes with almost no resistance if they had representation in the British law making body, but the king didn't listen and continued to make colonist pay taxes. This made the the colonists to make their own governing bodies within the colonies and this created tensions between Britain and the colonies.

Mercantilism and The Navigation Acts.

Mercantilism was an economic practice in which a country would establish colonies for their own economic gain. To enforce this the King made a set of laws so the colonies would follow this. The laws were made so that the colonies could only sell their goods to Britain and at a very cheap price. Then the colonists could only buy the finished goods from Britain and at a very high price so that Britain could make a lot of profit. This made the colonists very mad because they realized they could get so much money by trading with other countries, so they started to smuggle and boycott these laws by making some of their own finished goods with their natural resources.

1: What kicked off the thoughts of the colonists wanting to separate?

2: What was the stamp act? What part of this event angered the colonists so much?

3: How did the colonists enforce the boycotts against the British products? What did they do when they found out someone was not following the boycott? 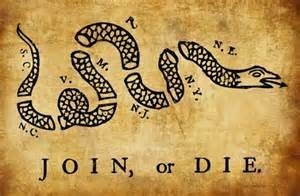 It was made by Ben Franklin to call unity among the colonies. It states that they would die under British rule and they should become one against Britain so they could gain independence from the unfair mother country.

Liberty or Death: Causes of the American Revolution?

1: What was the Proclamation of 1763, and why did it anger the colonists so much?

2: What arose the ideas of the republicanism in the colonies?

3: What did the colonists boycott and how'd they enforce the boycotts?